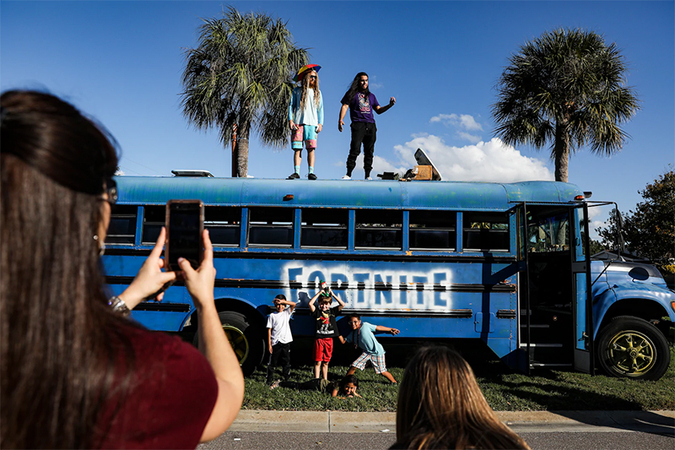 Fortnite is better known for facilitating virtual battles between video game players. On Thursday, it picked a fight of its own with Apple, setting the stage for a courtroom brawl that, if successful, could have far reaching ramifications for the iPhone maker.

Epic Games, maker of Fortnite, said Thursday it is suing Apple over "anticompetitive conduct" after the tech giant kicked the game's app off its App Store. Epic Games released a feature that lets users choose how they want to pay for in-app purchases - either through the App Store or Google's Play Store, or from Epic directly, which saves up to 20 percent.

Not long after Apple removed its app, the video game maker filed a 65-page lawsuit in federal court in Northern California that appeared to anticipate Apple's actions.

Fortnite is one of the most popular video games in the world. Last year, Epic Games boasted the game had about 250 million active accounts a month. According to market research firm Sensor Tower, Fortnite was downloaded 2.4 million times on the App Store over the last 30 days and generated $43.4 million in consumer spending through the iOS app over that period. Since it was created, it has tallied 133.2 million installs and accounted for $1.2 billion in spending.

"Apple's removal of Fortnite is yet another example of Apple flexing its enormous power in order to impose unreasonable restraints and unlawfully maintain its 100 percent monopoly over the iOS In-App Payment Processing Market," the filing reads.

"Epic enabled a feature in its app which was not reviewed or approved by Apple, and they did so with the express intent of violating the App Store guidelines regarding in-app payments that apply to every developer who sells digital goods or services," he said in an emailed statement.

Google had removed Fortnite from its Play Store as of late Thursday. Android users can still download Fortnite directly from Epic's website.

"For game developers who choose to use the Play Store, we have consistent policies that are fair to developers and keep the store safe for users," Google spokesperson Dan Jackson said in a statement. "While Fortnite remains available on Android, we can no longer make it available on Play because it violates our policies."

Epic's legal battle against Apple is the latest episode in a war between app developers and the tech giant. In recent years, Apple has grown more powerful because of its App Store, which controls which apps can be installed on iPhones. By contrast, developers can bypass Google's Play Store with different Android app stores or offer their programs to download from their own sites. The App Store is more lucrative, though, because iPhone users spend more money online. And when businesses designed around mobile apps have proven successful, Apple has increasingly encroached into those areas, using its power over the App Store to advantage itself.

The App Store has drawn the attention of lawmakers investigating Apple and other tech giants over competition concerns. Last month, Apple CEO Tim Cook defended the App Store cut in front of Congress when big tech executives were grilled as part of the investigation.

In recent years, as Apple has grown more powerful and competition in the smartphone industry has withered, developers have begun to fight back. Most prominently, music streaming service Spotify made public complaints in Europe, leading to an investigation by the European Commission into Apple's business practices.

Even as companies push back, Apple has grown more aggressive in enforcing its cut. In the past, Apple had allowed developers to collect subscription fees outside the App Store, so long as those alternative options were not advertised on the App Store. Companies like Amazon and Spotify had taken advantage of that loophole. But when email service Hey tried to do this, Apple stopped approving updated versions of its mobile app.

Companies like Spotify and Epic Games argue that Apple's fees are artificially high because of Apple's monopoly over the App Store, and they say the benefits Apple provides as the curator of the store do not merit a 30 percent fee.

Spotify spokesman Adam Grossberg said the company applauded Epic Games' decision to "take a stand against Apple and shed further light on Apple's abuse of its dominant position." He added, "Apple's unfair practices have disadvantaged competitors and deprived consumers for far too long. The stakes for consumers and app developers large and small couldn't be higher and ensuring that the iOS platform operates competitively and fairly is an urgent task with far-reaching implications."

Members of Congress asked Cook if the company would ever increase its 30 percent commission, but the executive sidestepped the question. He stated the company has never increased subscription fees.

Apple has made some exceptions to the 30 percent fee, including for Amazon videos earlier this year. But those exceptions appear to be one-off deals. Apple also does not collect fees on purchases of real-world goods, such as items shipped from Amazon, coffee bought from Starbucks or cars ordered through apps like Uber and Lyft.

Fortnite was released as a free game in 2017 by Epic Games. While it initially failed to make a splash, the game quickly pivoted toward the then-growing battle royale game genre, which drew more fans every month. The game's popularity skyrocketed in March 2018 when Tyler "Ninja" Blevins, the world's most popular video game streaming personality, played matches of Fortnite with rappers Drake and Travis Scott, and NFL star JuJu Smith-Schuster.

Fortnite then became a global cultural touchpoint, becoming so popular that national sports leagues grew concerned about lax player training schedules, and Netflix executives cited the game, and not HBO or Hulu, as its biggest competitor.

The game remains one of the most-watched on Twitch, the streaming platform owned by Amazon.

On Thursday, shortly after its app was taken down by Apple, Epic rolled out a website and a video that spoofed Apple's famous 1984 Super Bowl commercial. Back then, IBM was the juggernaut and Apple was the upstart. The commercial used George Orwell's dystopian novel "1984" to paint IBM as Big Brother.

Now, Epic Games sees Apple as having taken IBM's place. "Epic respectfully requests this Court to enjoin Apple from continuing to impose its anti-competitive restrictions on the iOS ecosystem and ensure 2020 is not like '1984.′"

Epic's suit says the payment system is used to effectively "gag app developers" from even mentioning other payment options outside the app.

"Apple has become what it once railed against: the behemoth seeking to control markets, block competition, and stifle innovation," the suit reads.