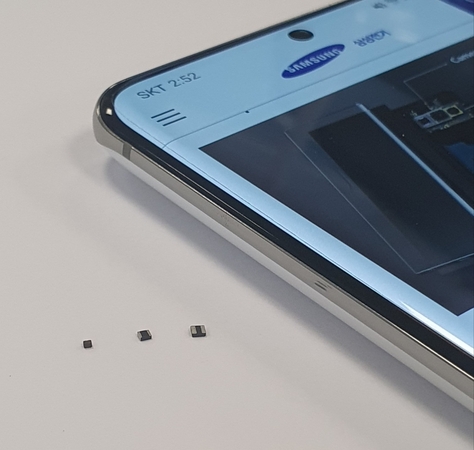 By im Byung-wook
The Korea Herald

According to the Korean electronic components maker, the new power inductor is approximately 50 percent smaller than the industry’s previously smallest product, with a width of 0.8 millimeter and a length of 0.4 mm, a significant development from a width of 12 mm and length of 10 mm. The thickness of the latest product measures 0.65 mm.

A power inductor is a key electronic component inside smartphones, wearable devices and electric vehicles that helps the battery supply a stable flow of electricity to the semiconductor.

“As the performance for electronic products increases and functionalities diversify, the size of the internal components must decrease along with an improvement in performance and volume,” head of the Central Research Institute at Samsung Electro-Mechanics Kang Heon-hur said.

Miniature power inductors are essential for the latest tech devices because their internal storage spaces have shrunk as they have become lighter and smaller to fit more components and accommodate 5G functions and multicameras, the company said. Also, as higher-spec components use up more electricity, the latest devices require power inductors that can withstand high currents.

For the size reduction, the company applied its material technology and semiconductor substrate manufacturing methods used for multilayer ceramic capacitors. Also, the company manufactured the power inductors in substrate units instead of processing them in individual units to boost productivity.

“A power inductor’s performance is determined by what kind of magnetic raw material it uses and how many more coils can be wrapped within a limited space. For the raw material, Samsung Electro-Mechanics used nano-grade, ultramicroscopic powders. Also, the company placed coils next to each other with almost no leftover space by using dimming technology, a method of marking circuits with light when manufacturing semiconductors,“ a company official said.