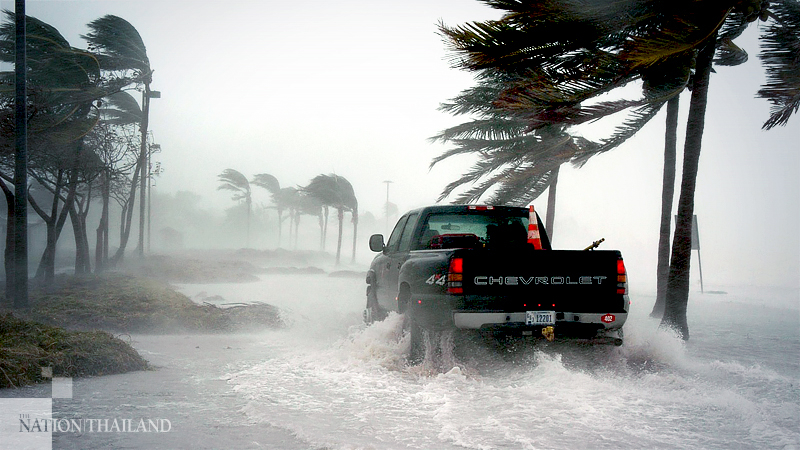 MOBILE, Ala. - As Hurricane Sally churned off the northern Gulf Coast with 80 mph winds, powerful waves pounded beaches, rivers and creeks swelled, the National Hurricane Center warned of "extremely dangerous and life-threatening storm surge" and residents from Louisiana to Florida were urged to seek higher ground.

Forecasters tagged slow-moving Sally as an unusual type, a "walking storm," because it lumbered at just 2 mph, about as fast as a lazy stroll. The lack of speed bought time for residents in low-lying St. Charles Parish, La.; Mobile County, Ala.; Harrison County, Miss.; and Escambia, Fla., to leave their homes.

But it meant as much as 30 inches of rain could fall along the coasts of those states and up to 5 feet of storm surge could inundate coastal communities. Forecasters said there could be record flooding along rivers in Northwest Florida, parts of Alabama and perhaps Georgia.

"The slow forward speed is likely to result in a historical rainfall event for the north-central Gulf Coast," the National Hurricane Center posted in an online discussion about the storm Tuesday.

Sally's wobbly movement also makes it hard to predict where it will strike land. On Monday, meteorologists predicted it would hit Biloxi, Miss., but that changed Tuesday and Mayor Andrew "FoFo" Gilich was relieved.

"We're real thankful that we were spared the storm surge," Gilich said. "Four to six feet they're predicting. That's a lot better than seven or 11."

But in Mobile, Ala., County Commissioner Merceria Ludgood watched with dread as predictions pointed their way.

"We're telling people that there's going to be a lot of water," Ludgood said from an emergency management facility where she and other officials planned to ride out the storm. "The ground can only hold so much of it. Don't wait to leave."

Mobile is a city with thousands of oak trees that could tumble when their root systems are soaked. It is also adorned with rivers, canals and the enormous Big Creek Lake that is prone to flooding, said Mike Evans, deputy director of the Mobile County Emergency Management Agency.

Evans said the county has been divided into evacuation zones. Residents south of Interstate 10 as well as those east of Interstate 65 in Mobile Bay and the network of rivers that feed it should get out, he said.

The county sheriff commissioned a 15-ton military grade vehicle to respond if residents who decide to hunker down are trapped. But Evans hopes it doesn't come to that. When the hurricane hits, public officials, emergency personnel included, planned to shelter in place.

Emergency officials gently asked Mobile County residents to impose on friends and family inland to put them up for a while. Theodore High School, where the county established a shelter, can usually hold up to a thousand evacuees. But social distancing as a result of the coronavirus pandemic has limited occupation to only 300.

Downtown Mobile was mostly empty Tuesday, with businesses in the flood-prone area closed in advance of Hurricane Sally. Signs of a hurricane's approach were a common sight: boarded windows, sandbagged doors and streets barricaded in places where water was expected to surge.

Hayley's Bar was one of a few exceptions. Doors were open and three customers enjoyed afternoon drinks. None seemed concerned about the coming storm.

"The city floods on like a normal rainy day," said Grace Foster, 23. "Here, we have rain, tropical storms, hurricanes. We're kind of due for a good hurricane."

Foster and the other patrons live within walking distance of Hayley's. They said they were ready for whatever Sally might bring.

"We are all stocked up for covid already, so we had a lot of the stuff we need," said Tres Wiggins, 28.

"I just moved all my plants inside," Foster said, "and we stocked up on alcohol."

Sonya Gunderson, 60, was having a ball at a retreat on the island, where she traveled from Iowa to meet seven friends who fished the ocean and frolicked on the beach.

But Sally chased them off the vulnerable strip of land into a condo in Mobile.

On Tuesday, she walked in a steady downpour downtown, wearing a blue raincoat and carrying a pan, a lighter and some candles - supplies borrowed from the property manager in advance of the storm's impact.

"All of our events are canceled," Gunderson said. "We had deep sea fishing, dinner on the ocean. Now we're just playing games."

At a popular fishing spot near Buccaneer Yacht Club, Robert Boykin, 62, sat with his wife in one of a dozen parked cars, looking out over the bay's unusually choppy waters.

"I just hope it doesn't get too bad, because I only stay a mile or two from here," Boykin said.

For Boykin and others, Sally's snail-paced approach made it hard to know just when to hunker down.

In Biloxi, the city's eight casinos were still temporarily shut after the storm turned east. One casino flashed a sign saying "Sorry."

Since 2005, residents compare major storms to Hurricane Katrina, which pummeled the city with 28 feet of storm surges that are still marked in blue paint on telephone poles.

"We got wiped off the face of the earth," said Karen Parrott, 63, as she took an afternoon stroll to the shore with her husband, Bill, also 63.

The couple said they were not worried about Hurricane Sally.

"Not after Katrina," she said.

Across the Route 110 bridge that links Biloxi to the city of D'Iberville, Miss., a pair of friends chatted as the high tide covered picnic tables and seeped into the road. They said they were not expecting much from Sally.

"It's doubtful this late in the season," said Joshua Jackson, 27, a construction worker from the community of Vancleave, Miss., who stopped to hang out under the bridge on his way home from work in Gulfport, Miss.

But the Biloxi mayor - a lifelong resident - said he was not prepared to declare storm season over.

"Who knows?" Gilich said about storm season, noting that in his State of the City address in January he had predicted a great year ahead. "Don't you just feel really good about 2020?" he recalled saying in his speech.

"Flooding is one of the most serious concerns we have with this storm," Escambia County Emergency Manager Eric Gilmore said during a Tuesday afternoon news conference. "The amount of rain and storm surge will make this a historic event."

The brand-new Pensacola Bay Bridge, one of only two evacuation routes off Santa Rosa Island and Pensacola Beach, was shut down Tuesday when a barge operated by a state contractor collided with the structure.

Local officials suspended tolls for the nearby Garcon Point Bridge, to make it easier for residents to evacuate.

On the other side of Escambia Bay, in downtown Pensacola, about 100 residents had hunkered down at a local civic center turned storm shelter by midafternoon.

Michael Kimberl, director of the Alfred Washburn Center, which serves the homeless, spent much of the last 24 hours ferrying the homeless to the civic center.

"I've been driving shuttle most of the afternoon and last night trying to get people to shelters," said Kimberl, who dropped off about 30 people there by 3 p.m. Tuesday.

Kimberl worried he wouldn't be able to reach all of the area's homeless before the storm made landfall and felt local authorities were partially to blame for waiting too long to announce local shelter openings.

"We had about 100 people at the center yesterday afternoon," he said. "Had I known about the shelter before we closed, I could have sent them there."