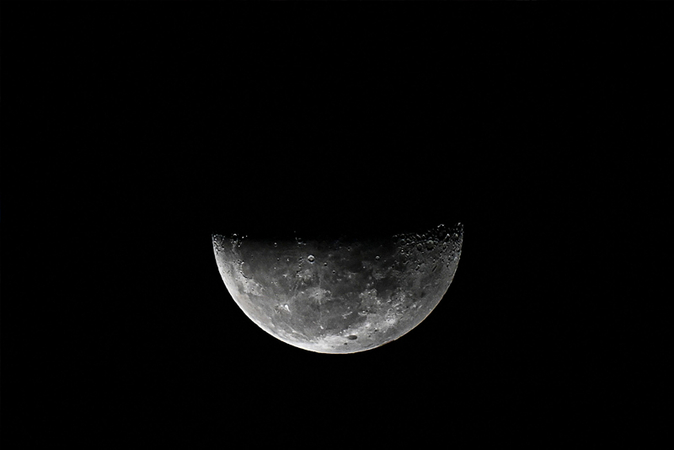 There is water on the moon's surface, and ice may be widespread in its many shadows, according to a pair of studies published Monday in the journal Nature Astronomy. The research confirms long-standing theories about the existence of lunar water that could someday enable astronauts to live there for extended periods.

One scientific team found the telltale sign of water molecules, perhaps bound up in glass, in a sunlit region. Another group estimated the widespread prevalence of tiny shadowed pockmarks on the lunar landscape, possible shelter for water ice over an area of 15,000 square miles.

Moon water has been eyed as a potential resource by NASA, which created a program named Artemis in 2019 to send American astronauts back to the moon this decade. Launching water to space costs thousands of dollars per gallon. Future explorers may be able to use lunar water not only to quench their own thirst but to refuel their rockets.

The conception of a bone-dry moon persisted widely until relatively recently. Astronomers in the 1800s believed the moon must be waterless because they could not see lakes or clouds through their telescopes. That notion was reinforced by the powdery lunar surface the Apollo astronauts saw and felt through the soles of their boots a half century ago.

A Soviet probe may have collected moon water, but that research, published in a Soviet journal in 1978, went largely ignored.

But in the 2000s, a picture of a water-tinged moon began to emerge. Careful studies of moon samples and spacecraft observations helped overturn the notion of a total lunar desert. In 2018, scientists found ice deposits at the moon's poles, which the Apollo astronauts did not visit. The lunar south pole in particular is believed to have reservoirs of potentially useful water in either ice or molecular form - though certainly not liquid.

Spacecraft such as India's Chandrayaan-1, using a NASA instrument to map minerals and other materials, hunted for lunar water and detected compounds of hydrogen and oxygen, the atomic components of water.

But those detections could not rule out sources other than water in sunlit regions, said Casey Honniball, a research fellow at NASA's Goddard Space Flight Center in Greenbelt, Md. Other hydrogen-oxygen compounds or the moon's thermal emissions may have muddled the signals.

The new discovery comes from remote observation of the moon's surface by an infrared telescope on SOFIA, a modified Boeing 747 airplane that flies high in Earth's atmosphere and scans the moon's surface. The instruments aboard the observatory detected subtleties in the moonlight at a wavelength of 6 microns, which the researchers believe is an unambiguous signal of water. "Only molecular water can create a 6-micron band," Honniball said.

John Grunsfeld, a physicist and former associate administrator for NASA's Science Mission Directorate, who was not involved with this research, said the new study confirms what was previously measured. "The SOFIA measurements are similar to others, including the lunar samples from the Apollo missions," he said.

The SOFIA study detected individual molecules of water near a massive crater formation, named Clavius, in the moon's southern region. Because the water molecules are so spread out, Honniball said, they "do not interact with one another and so cannot form liquid water or water ice."

She suspects they were protected in pockets between grains of dust or within glass beads, the size of pencil tips, formed by micrometeorite impacts. "The water must be sheltered from the harsh lunar environment, because at the time of our observations, the location on the moon was quite warm," Honniball said.

The molecules of water found in this new study aren't abundant enough for astronauts to use, Honniball said. They detected the equivalent of a 12-ounce water bottle per cubic meter of soil. But greater concentrations may be found in other lunar regions, such as the moon's volcanic deposits.

A second report estimated where ice could collect across the moon's permanently shadowed areas. Craters and indentations on the surface, which the authors called "micro cold traps," could cover more than 15,000 square miles of the moon's surface. The bogglingly chilly temperatures in those traps - minus-260 degrees Fahrenheit or below - could keep ice stable as a rock for a billion years, said study author Paul Hayne, a planetary scientist at the University of Colorado at Boulder.

Using mathematical models plus temperature observations from a NASA robot, the Lunar Reconnaissance Orbiter, Hayne and his colleagues estimated there are tens of billions of these traps. They range in size from about the width of pennies to a yard across. This research does not confirm ice exists in all the traps, but they would be tempting targets for astronauts, Hayne said. Instead of trekking into a vast crater to collect water, future astronauts may be able to bend down and pluck ice nuggets from these dark pockmarks.

"The great thing about science is that both papers make predictions that are testable," said Bethany Ehlmann, an assistant professor of planetary science at Caltech who was not involved in the research. She noted that a robotic mission, called Lunar Trailblazer, would orbit the moon to look for water in shadowy craters as well as the cold traps.

NASA also announced in June that it had hired a private company to deploy a rover, named VIPER, to the moon's south pole in 2023, that will drill for water a meter below the surface.

"Both papers deepen the mysteries of lunar water while providing pieces of the puzzle," she said in an email. "It's exciting to think that lurking in the shadow within ten degrees of the pole are tiny reservoirs of water ice."