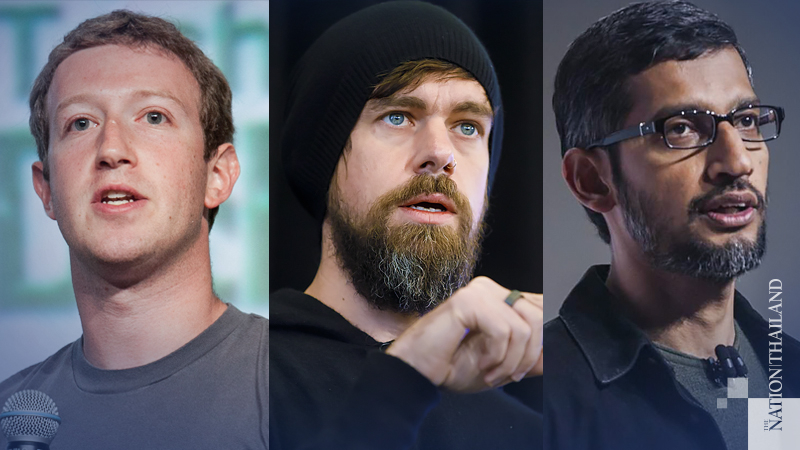 WASHINGTON - Democrats and Republicans grilled Facebook, Google and Twitter at a highly partisan congressional hearing Wednesday that exposed differing views and deep distrust about the power of Silicon Valley to police the web.

Senate lawmakers had invited the three tech giants' top executives to testify as part of a broad review of decades-old federal laws known as Section 230 that spare social media sites from being held liable for the posts, photos and videos they allow or remove -- rules that many members of Congress increasingly have come to see as outdated. Even Facebook chief executive Mark Zuckerberg on Wednesday said he believes it is necessary to "update the law."

Caught in the middle were Facebook, Google and Twitter, under pressure from Democrats to patrol their sites and services more aggressively and Republicans who felt the companies should have a more hands-off role with most political speech. The mixed signals threatened to add new complications to the tech giants' already controversial work to protect the world's most popular digital communications channels from abuse. And it evoked the lingering, widespread unease in Washington with the political and economic leverage the three companies have amassed and the ways they seek to wield it.

The nearly four-hour session was rife with hyperbole and misstatement sometimes on the part of lawmakers themselves, in a reflection of the country's many schisms -- and the stakes for Silicon Valley six days out from Election Day.

Republicans on the Senate Commerce Committee seized on the hearing to attack Zuckerberg, Google's Sundar Pichai and Twitter's Jack Dorsey over allegations they deliberately censor conservatives, including President Donald Trump, emphasizing the power they say tech companies wield over political speech. All three tech giants denied they harbor any political biases, and GOP lawmakers provided scant evidence for their claims. But the party's panel members insisted anyway on Wednesday that Silicon Valley sought to tip the political scales in its favor.

"Who the hell elected you?" GOP Sen. Ted Cruz (Texas) railed against Twitter's Dorsey in one of the most heated exchanges. He and other Republicans assailed the company over its initial decision this month to block links to a story by the New York Post about Vice President Joe Biden's son, Hunter, which had contained unverified information about his business dealings. The Washington Post has not been able to verify the documents.

"Why do you persist in behaving as a Democratic super PAC," Cruz continued, "silencing views to the contrary of your political beliefs?"

"We're not doing that," responded a more measured Dorsey, marking one of many attempts by the Twitter chief executive and his peers to assuage GOP concerns. He acknowledged Twitter did err in its earlier decision to block the link, which is now allowed on the site.

Democrats, on the other hand, fired back that Republicans sought to use the hearing to apply political pressure on the industry as Americans cast their 2020 ballots. Sen. Brian Schatz (Hawaii) said GOP lawmakers only convened the session to "bully" social-media sites into giving Trump and his fellow conservatives more favorable online treatment. He and others pointed to a litany of examples in which tech giants -- seeking to crack down on harmful misinformation -- had taken action against Trump and his allies.

"We have to call this hearing what it is: it's a sham," Schatz said. "This play my colleagues are running did not start today, and it is not just happening here in the Senate; it is a coordinated action across the government."

The three tech executives' testimony -- on the eve of the 2020 election -- follows four years after Russian agents sought to stoke social unrest on social media in a bid to undermine the last presidential race. Entering the Senate hearing, Facebook, Google and Twitter explained that they had made great strides in enhancing their content-moderation practices -- hiring more reviewers, spending billions of dollars and improving their technologies and policies so they can more aggressively and consistently identify harmful content across the web.

But the upgrades hardly satisfied some lawmakers, who pointed Wednesday to a wave of hate speech, terrorist content, election disinformation and other harmful posts, photos and videos that still proliferate widely on social media. Members of Congress and tech leaders alike each acknowledged Wednesday that the threats had not dissipated in the four years since the Kremlin's online siege.

"Social media is so pervasive in the daily lives of Americans and traditional media outlets that it can be weaponized to manipulate the public discourse and destabilize institutions," said Sen. Tammy Duckworth (Ill.), warning that a wide array of adversaries had come to adopt Russia's playbook.

Democratic Sen. Gary Peters, meanwhile, raised the potential for "real-world violent threats" to be incubated on Facebook, where a group of suspects earlier this year had started planning an attack on Michigan Gov. Gretchen Whitmer.

"We identified that signal to the FBI six months ago," Zuckerberg said in response, seeking to defray the concerns. "That's part of our routine in how we operate."

The incidents have galvanized a new drive on Capitol Hill to rethink Section 230, as well as a slew of legislative proposals that might open the door for the government to hold Facebook, Google and Twitter liable for their decisions about what to allow and prohibit online. Zuckerberg, Pichai and Dorsey each sought to defend Section 230, arguing it is what allows them to keep their platforms open to expression.

But the loose congressional consensus for reform broke down over Republicans' allegations of political bias, which a wide array of critics -- including free-speech advocates and congressional Democrats -- see as an attempt to shield conservatives from scrutiny.

Republican leaders have ratcheted up their attacks on the tech industry particularly as Facebook and Twitter have come to take a more aggressive approach to harmful content, including tweets and other posts shared by President Trump. The two tech giants have labeled, limited or fact-checked some of his most controversial claims about the coronavirus and the 2020 election, fearing the president's comments about the pandemic threaten public health and his attacks on mail-in balloting could undermine faith in American democracy.

Sen. Cory Gardner (Colo.), a Republican on the Commerce Committee, on Wednesday blasted Dorsey and other tech executives as "unelected elites in San Francisco or Silicon Valley deciding whether my speech is permissible." Another GOP panel member, Sen. John Thune (S.D.), faulted Facebook, Google and Twitter for deciding "what speech gets to be amplified and suppressed." At one point, Sen. Marsha Blackburn (Tenn.) even appeared to attack Pichai, the chief executive of Google, for employing an worker who previously had said "unkind things about me."

Democrats rejected the lines of questioning. Connecticut Sen. Richard Blumenthal -- who said he had sought to reform Section 230 for nearly 15 years -- said Republicans' comments instead betrayed their efforts to "bully and browbeat the platforms here to try to tilt them toward President Trump's favor."

Trump in recent months has blasted the industry, signed an executive order to enhance the government's power over political speech and encouraged Republican state officials to investigate big tech. On Wednesday, in the midst of the hearing, he tweeted a new attack to his 87 million followers, telling them Congress should "Repeal Section 230!"

Massachusetts Democratic Sen. Edward Markey said the efforts combined still aimed to "feed a false narrative about anti-conservative bias and to intimidate big tech so it will stand idly by" as the election nears its end.