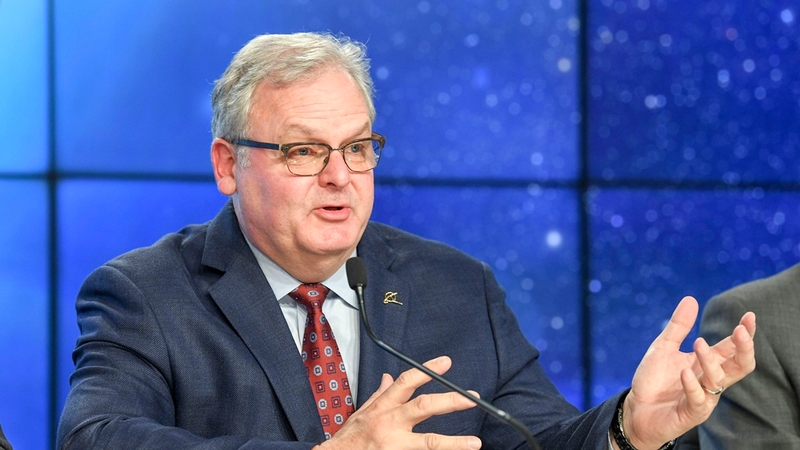 WASHINGTON - Boeing's bid to build a spacecraft capable of flying NASA astronauts to the moon didn't meet NASA's requirements, and the company was going to lose out on a contract worth hundreds of millions of dollars.

But NASA was worried that the corporate giant would protest the contract award, potentially holding it up for months at a time when the space agency was trying to meet a White House mandate to get astronauts to the lunar surface by 2024.

So in February, Doug Loverro, then the head of NASA's human exploration directorate, called Jim Chilton, the senior vice president of Boeing's space and launch division, to explain that the company was going to lose the contract and to inquire whether it would file a challenge, according to two people with knowledge of the situation.

That call, which occurred during a period when the agency was to have no contact with any of the bidders, is now the subject of investigations by the NASA inspector general and the Justice Department into the integrity of the procurement, according to multiple people. It also led NASA Administrator Jim Bridenstine to force Loverro to abruptly resign in May.

Boeing did not protest the award of the lunar lander contract - which was awarded on April 30 to three bidders for a total of nearly $1 billion: a team led by Jeff Bezos's Blue Origin; the defense contractor Dynetics, and Elon Musk's SpaceX. (Bezos owns The Washington Post.)

But it did something that NASA officials found just as alarming: After Loverro told Chilton that Boeing would not win the award, the company attempted to revise and resubmit its bid. That last-ditch effort to win one of the contracts was so unusual given that the time for bids had passed that members of the NASA committee considering the award feared it may amount to a violation of procurement regulations. They alerted the agency's inspector general, who in turn referred the matter to the Justice Department. The U.S. attorney's office in the District of Columbia has impaneled a grand jury and is investigating, officials said.

The Post previously reported that Boeing tried to revise its bid after the call between Loverro and Chilton, but this is the first time the substance of their conversation has been reported.

It's unclear who else at NASA knew about the conversation between Loverro and Chilton, or if anyone directed Loverro to ask Boeing about whether it would protest.

In his resignation letter, Loverro wrote that he took "a risk earlier in the year because I judged it necessary to fulfill our mission. Now, over the balance of time, it is clear that I made a mistake in that choice for which I alone must bear the consequences."

In an interview in spring, Loverro said he was trying to speed up NASA's lunar program, known as Artemis, as many were already doubting whether NASA could meet the White House's new 2024 deadline. "It had to do with moving fast on Artemis, and I don't want to characterize it in any more detail than that," he said. Loverro was an adviser to the procurement selection committee, but didn't have final say into the awards.

NASA referred to a previous statement that said the procurement for the lunar spacecraft, known as the Human Landing System (HLS), was handled properly and is proceeding with the program. "The agency is confident in the integrity of the HLS procurement," it has said. "Mr. Loverro was not the selection official, and his resignation has no impact on the performance of these HLS contracts."

Typically, violations of the Procurement Integrity Act are situations where contractors receive inside information they use to their benefit to win a contract. In this case, Boeing still didn't win the contract - its revised bid arrived well after the submission deadline - but "there are rules and processes that shouldn't be taken lightly," said Scott Amey, the general counsel for the Project on Government Oversight, a watchdog group.

"Boeing should have known better," he said. "If they tried to use that info to revise their bid, they could equally be on the hook for a Procurement Integrity Act violation because they were trying to use it for their benefit."

POGO has catalogued 80 instances of Boeing misconduct since 1995, resulting in nearly $1.5 billion in fines. The highest profile case involved Air Force contracting officer Darleen Druyun, who steered contracts to Boeing and received a lucrative job at the company, as did her daughter and son-in-law. She was sentenced to nine months in prison. Michael Sears, then Boeing's chief financial officer, received a four-month prison sentence after admitting he gave her the job in exchange for inside information.

The loss of the lunar lander contract was another embarrassment for Boeing, which has been a NASA partner since the dawn of the Space Age. The company was once so trusted that NASA initially gave Boeing only a limited review of its safety culture while forcing its rival SpaceX to go through a comprehensive audit after Elon Musk, SpaceX's founder and CEO, took a hit of marijuana on a podcast broadcast on the Internet.

But then at the end of last year, Boeing's Starliner spacecraft suffered multiple software problems during a test flight without astronauts on board that forced the company to redo the mission. It also has been reeling since the fatal crashes of two 737 Max airplanes that killed a total of 346 people.

Its stumble on the lunar lander contract opened the door for other companies. A team led by Blue Origin, including Lockheed Martin, Northrop Grumman and Draper, won an initial contract worth $579 million. Dynetics, which teamed up with the Sierra Nevada Corp., received $253 million, and SpaceX won $135 million.

In addition to Boeing, another company, Vivace Corp. of San Antonio, was eliminated early in the source selection process, according to NASA's source selection document. But it doesn't say why the companies' bids were rejected. Vivace did not respond to requests for comment.

Last month the agency said that all three winning companies completed a key milestone that establishes the designs, schedules and plans to have their vehicles certified by NASA for human spaceflight.

The agency has said it plans to select two of the vehicles in the coming months to continue development.