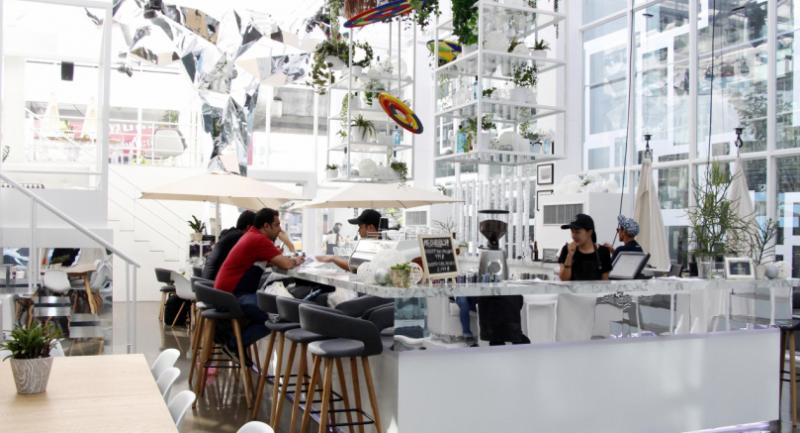 Mercedes me Box is an allday dining restaurant focusing on the finest seafood and cocktails.

WITH A MERCEDES BENZ saloon parked out front, it’s easy to mistake the cube-shaped glass store in front of Siam Discovery for a car showroom. The venue is indeed run by Mercedes Benz Thailand but it’s not selling cars but crustaceans. Dubbed Mercedes me Box – and yes the “m” in “me” is lower case – it’s the company’s attempt to fully embrace the lifestyle concept through an all-day, pop-up eatery. The six-metre-height glass box restaurant is not designed exclusively for Mercedes Benz customers, but welcomes everyone wanting to enjoy a pre or post prandial tipple at the cocktail bar situated at the heart of the store or indulge in European-style seafood dishes.

Though compact, the space also makes use of levels with elevated dining areas. If you’re travelling solo, perch with other journeymen on a stool at the cocktail bar, or claim a hanging hammock with a device that allows you to move it up and down. One corner is furnished with a comfy sofa with a low table that’s perfect for meeting up with friends or you can head up to the top level for a little privacy. “We have chosen a new approach to offering an impressive experience with this pop-up store, which is based on our eye-catching lifestyle stores in Milan, Tokyo, Hong Kong, Busan and Hamburg. Under the concept “be the best”, it aims to strengthen the relationship with both Mercedes Benz owners and the general public,” says the firm’s president Michael Grewe.

The lifestyle concept project kicked off late September with the launch of the pop-up chocolate bar called “Mercedes me Bar” at Siam Discovery that offers tantalising drinks and desserts made with premium cocoa from around the globe.

The kitchen is operated by Lobster & Oyster restaurant, which is known for its exclusively sourced seafood ingredients. Chef Marian Baranek, who has cooked at the Michelin-starred restaurant Hix Oyster & Chop House in London, is in charge and prepares dishes especially created for me Box using ingredients mainly brought in from overseas. The menu boasts Royale Cabanon Oysters (Bt175 each, Bt1,020 for six and Bt1,980 for a dozen), which are praised for their firm, crispy texture and slightly sweet flavour. The oysters are cultivated in an exclusive farm in France, which limits the density to one square metre per two oysters, thus allowing the molluscs to fully absorb the nutrients from the natural seawater.

Raw oysters are rather like a fine wine, all complex flavours and textures that vary quite a bit depending on how salty the seawater they grew up in was, and what other minerals and nutrients were part of the environment.

For an oyster, raw is well done. If you grumble, a drop of lemon juice or shallot vinegar won’t infuriate them. To cater to the Thai palate, a spicy seafood sauce and a reduction of Japanese soy sauce slightly mixed with honey are also served as optional choices.

Waiting to be shucked are Pacific oysters from Holland that are known for their firm texture and creamy aftertaste, Tasmanian molluscs from the coast of Australia with a mild taste, and Marennes Oleron from the French coast that are soft, mellow and juicy.

Poached Lobster served with roasted cauliflower, cauliflower puree and lobster sauce is another highlight and priced at Bt775 for half and Bt1,550 whole.

“We select the large lobsters from the waters off Canada at the height of the season. We serve them with a sauce made of lobster head and shell for a rich and creamy taste that’s then blended with vegetables and herbs stewed for hours for an intense, flavourful sauce that brings out the full of flavour of the lobster,” says the Slovakia-born Baranek.

Baranek worked in several restaurants in London for a decade before joining with his wife Parichart to open Lobster & Oyster at Bangkok’s Nawamin Festival Walk mall three years ago. The restaurant is relocating soon to Crystal Park mall. Ideal to share with your partner is Roasted Seafood Platter (Bt950) that is served hot and makes a delicious change from the traditional serving on ice. The platter offers lobster tail, prawns, Buchot mussels, pork sausages and corn baked with garlic butter, ground Thai chilli, paprika and cayenne pepper but is not too spicy. For something lighter, there’s Lobster Salad (Bt435) with cos lettuce, peach, cucumber, lobster meat, and Bloody Mary jelly, or Peppery Prawn and Squid Salad (Bt380) where the prawns and squid are hidden in a green mountain of rocket, watercress, mint, cilantro and peas. It’s drizzled with honey mustard vinegar dressing. For dessert, a good choice is the Chocolate and Honeycomb Cheesecake (Bt160) or Boozy Caramel Shakes (also Bt160) – a refreshing caramel shake with a scoop of vanilla ice cream and a special mixture of vodka and Malibu Coconut. Renowned bartender Ben-David Sorum who has worked with several global spirit brands, is in charge of the drinks and has created special cocktails for Mercedes me Box. B&T B.Luxe is a botanical mix made from juniper with flowery, fruity hints of elderflower and the tartness of hubarb. It is suitable for people who enjoy classic gin and tonic and are ready for the next level in their favourite tipple.

The Ocha is also gin-based and features citrusy yuzu sake and egg white for a silky, foamy texture.