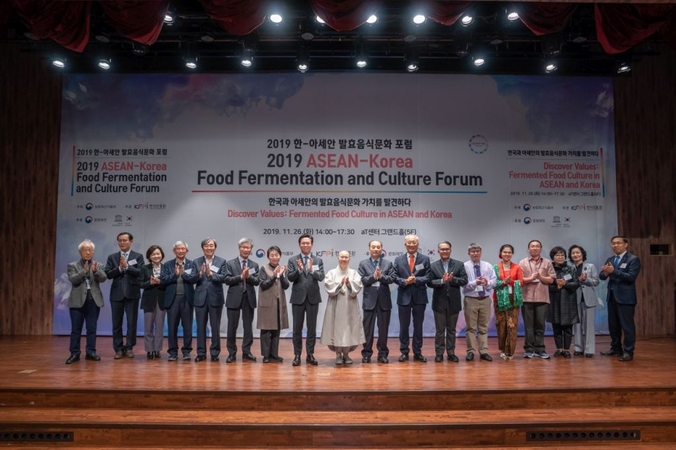 Participants at The ASEAN-Korea Food Fermentation and Culture Forum pose at the aT Center in Seoul on Tuesday (Ministry of Agriculture, Food and Rural Affairs)

By By Park Yuna
The Korea Herald

Experts on fermented food from Asia came together for a forum on Tuesday, amid growing recognition of the health and nutritional benefits of such food worldwide.

Experts from Korea and four member states of ASEAN --Vietnam, Thailand, Indonesia and Malaysia -- gathered at the aT Center in Seoul to introduce fermented food, exchanging knowledge and introducing the different cultural backgrounds of their cuisines.

The ASEAN-Korea Food Fermentation and Culture Forum was held on the sidelines of the ASEAN-ROK Commemorative Summit, which kicked off in Busan on Monday. Representatives from the five countries talked about their fermented food and culture, under the topic of “Discover Values: Fermented Food Culture in ASEAN and Korea.”

Jang comes in a variety of flavors based on the ingredients and the method of fermentation. Doenjang and ganjang are fermented soybean products, while fermented soybean and red pepper powder are used to make the fiery red paste called “gochujang.”

Shin Dong-hwa, a professor emeritus at Chonbuk National University, discussed how to sustain and develop the fermented food of Korea.

Winarno introduced tempe or temphe, a type of Indonesian food made by fermentation. He talked about the excellence of the food product by presenting various examples of how the food is served. Based on soybeans, tempe comes in a cake form.

Professor Ab Karim, who is also a chef in Malaysia, presented not only a variety of fermented food from his country but also Malaysian dishes that reflect the multiple ethnic identities of the country’s population.

A round-up discussion based on the presentations followed.

An official from the Ministry of Agriculture, Food and Rural Affairs said, “We hope the event provided an opportunity to learn the importance of fermented food products of Korea and ASEAN countries. We also expect the countries will be able to strengthen cultural and economic ties through this kind of event, which was held as part of the ASEAN-ROK Commemorative Summit.”

Around 200 people from the food industry and academic institutes attended the event, according to the Ministry of Agriculture, Food and Rural Affairs and the Korean Food Promotion Institute.

This article was produced in conjunction with the Ministry of Agriculture, Food and Rural Affairs. -- Ed.