The Thai appetite for Norway's salmon has grown substantially, despite the economic slowdown, according to Norwegian Seafood Council (NSC).

Asbjørn Warvik Rørtveit, NSC director of Southeast Asia, said that salmon has a unique position in the Thai market due to its taste, appearance and usage, and is not easily substituted by other species or products in the main segments.

“Even though we’ve seen a decline in the Thai economy, salmon consumption is growing substantially. This shows that there is a strong demand among Thai consumers. We therefore expect growth in sales in the coming years,” Rørtveit said.

“The demand for salmon [in Thailand] has continued to rise in popularity because of Japanese restaurants [Bangkok has the highest concentration of Japanese restaurants outside of Japan, numbering some 2,000 outlets and growing] and ‘all you can eat’ buffet restaurants which often feature salmon sashimi, together with a growing trend in home consumption among mid- to high-end food services and retailers," he added.

The share of fresh Norwegian salmon in Thailand has grown significantly since 2019, as the demand in the Thai market has gradually shifted from frozen to fresh salmon.

An estimated 13,000 tonnes of fresh Norwegian salmon were consumed in the Thai market last year.

In total, Norway exported seafood to Thailand valued at Bt5.2 billion in 2019, where salmon and fjord trout accounted for 87 per cent of this value. Norway’s seafood exports to Thailand in 2019 expanded 33 per cent from 2018.

“We believe that Thailand and Southeast Asia will become an even more important market for Norwegian salmon and fjord trout, and we expect that the volume will increase also in 2020,” he added.

The NSC will continue to boost the demand for salmon in Thailand by stepping up awareness for Norwegian salmon as best fit for raw consumption, he said.

This will be achieved through the education of foodservice, importers and modern retails about Norwegian salmon, its origin, benefits, food safety, handling, and training through marketing, PR and digital activities together with local stakeholders on behalf of Norwegian exporters for both business-to-consumer and business-to-business targets in Thailand.

“We also aim to develop the fjord trout market [in Thailand] in the upcoming year. As we have introduced our premium fjord trout late last year to the media and the public, we want to educate Thai people about the proper way to cook and how to differentiate them from Norwegian salmon," Rørtveit said. 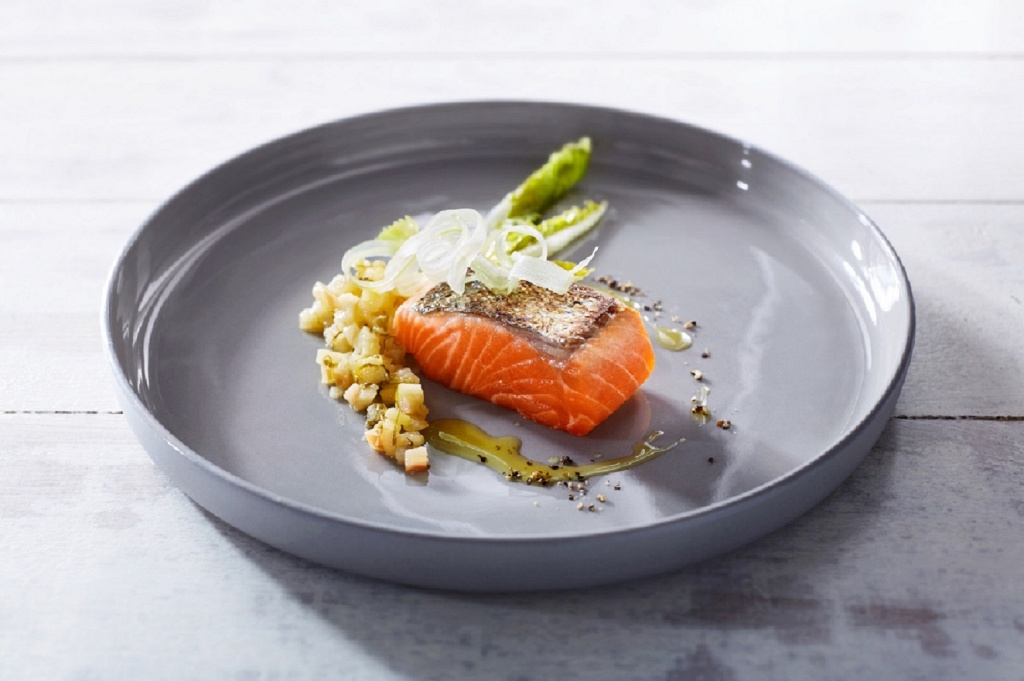 Medium Norwegian fjord trout is the only trout to live its life in fjords. It is particularly popular with creative cooks. This recipe pan fries the trout to keep it moist and tasty!

1. Heat the oil in a pan. Place the fjord trout into the hot oil with the skin side down, lightly press on it and sear. Reduce the heat and continue to fry on the skin side. Salt both sides before serving.

2. Dice the apple into 0.5 x 0.5 cm cubes. Use a potato peeler to peel some long strips from the green part of the celery. Place the strips and the green part of the celery in iced water. Finely dice the remaining celery. Melt the brown sugar in a saucepan, deglaze with the apple juice and then add the olive oil. Add the diced apple and diced celery, and lightly salt. Allow this mixture to boil away briefly. Stir in the wasabi paste (to taste). Stir the butter into the mixture while still hot, add the juice and zest of the lime, then season with pepper.

3. Wash the lettuce, quarter it lengthways and pat dry. Heat the olive oil and butter in a pan. Add the lettuce to the pan, deglaze with apple juice and then stew it in the juice. Season with salt.

4. Arrange the romaine lettuce and place the fjord trout on top. Spoon the apple and celery relish onto the plate. Finish with some strips of celery and the green part of the celery. The number of ingredients has been changed.

Please remember: Be careful when adding salt and seasoning during cooking – you can always add more at the end if you need to.