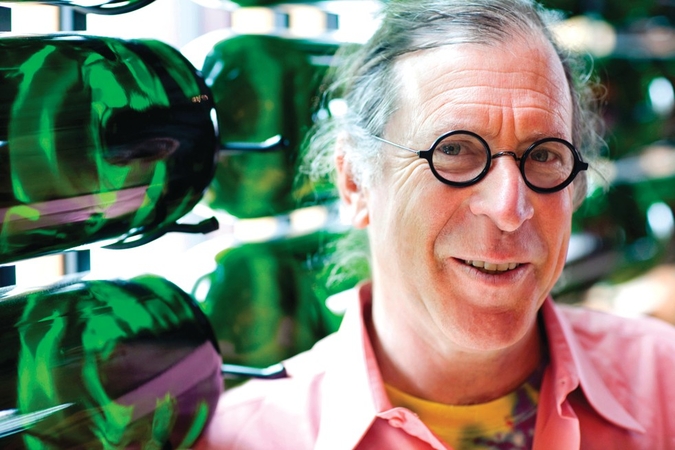 By Special To The Washington Post · Dave McIntyre · FEATURES, FOOD

The romantic idea of a small, individualistic winery tilting quixotically at the windmills of corporate wine took a hit this month with the news that Randall Grahm has sold Bonny Doon Vineyard. Grahm's story - his successes and failures - is quite personal and individual, yet the sale illustrates the difficulty small independent wineries face in a market that is increasingly consolidated at every level.

If it is possible for anyone to be both icon and iconoclast, Grahm accomplished that. He launched Bonny Doon in 1981 hoping to make pinot noir in the Santa Cruz Mountains of California. But he quickly turned to Rhone varieties such as grenache and syrah. He named his flagship red blend Le Cigare Volant, after a 1954 ordinance passed by the famous wine town of Chateauneuf-du-Pape in southern France that banned "flying cigars" - UFOs - from landing in the vineyards. Wine Spectator featured him in Lone Ranger regalia on its cover in 1989 as "The Rhone Ranger," helping launch a movement that still thrives today. He was one of the first U.S. winemakers to champion screw caps, even staging a lavish, if premature, news conference "funeral" for the cork. His literary newsletters delighted his fans with humorous jabs at "big wine" and the critics who rewarded higher alcohol with higher point scores, including a lengthy riff on Dante's "Divine Comedy" called, "The Vinferno." His collected writings were published in book form in 2009 as "Been Doon So Long" and won Grahm a James Beard Award.

He created the Big House line of wines, which offered high quality at prices almost impossibly modest for California, but sold it in 2006 because he didn't want to become the type of "big wine" corporation he loathed. He also created Pacific Rim Riesling, with innovative labeling you read through the wine in the bottle, and built that into a successful brand before selling it in 2011. Bonny Doon's Vin Gris de Cigare was a hit rosé before rosé became a craze. He was also among the first - and still very few - to advocate ingredient labeling on wines.

Grahm's creativity and restlessness didn't always work in his favor. He acknowledges impatience with "the business side of the business," adding, "spreadsheets give me a headache." In a conversation I had with him late last year, he tended to begin his answers with "Well, it seemed like a good idea at the time . . . " He grew Bonny Doon to 40,000 cases, not large by California standards, but he had so many different wines it was often hard to keep up. The market couldn't keep up, either, and ultimately it moved on.

Bonny Doon's new owner is WarRoom Ventures, the parent company of Lapis Luna Wines in Santa Margarita, Calif. The price was not disclosed. Grahm will remain with the company as a partner and "guarantor of gravitas." Bonny Doon's production manager, Nicole Walsh, will continue to oversee wine production. Grahm remains owner of Popelouchum, a vineyard in San Juan Bautista, where he is attempting to breed new grape varieties suited to California's soils and climate.

While Grahm tried to succeed with Bonny Doon in both traditional distribution and direct-to-consumer sales, he said those two paths are increasingly difficult to navigate, because they value opposite attributes.

"There has been a greater consolidation of the wholesale channel, with mid-sized fine wine distributors - those ideally suited to sell Bonny Doon wines - becoming an endangered species vulnerable to either acquisition or non-viability," Grahm explained to me in an email after the sale was announced. His "eclectic experimentation" was "anathema" to wholesalers, who favor "ubiquity, simplicity, availability," he said.

WarRoom "has taken the wise course of focusing on wholesale" to grow the Bonny Doon brand, Grahm said. That will come at a price. The new focus will have only four wines: Le Cigare Volant and Le Cigare Blanc, a vermentino-based white, the popular Vin Gris de Cigare, and another white from the picpoul grape. Familiar labels like Old Telegram, Clos de Gilroy and Cardinal Zin will no longer be produced.

That sounds a bit like the strategy that made Big House wines a success before Grahm turned away from it, as well as a line from the opening of "The Vinferno," as his narrator begins the descent into the nine circles of vinous hell.

"The vast portfolio of labels, brands, had once seemed all to the good . . . "

The world of wine lost two French giants in January. Georges Duboeuf, the "king of Beaujolais," died Jan. 4 at age 86. Duboeuf was a marketing genius who turned Beaujolais Nouveau, the barely fermented wine of the recent harvest, into a global party each November.

While Duboeuf popularized Beaujolais, Michel Lafarge created sublime burgundies that entranced many connoisseurs. Lafarge died Jan. 15 at age 91. He was a fifth-generation vigneron, based in Volnay, with small vineyards in other villages of the Cote de Beaune.