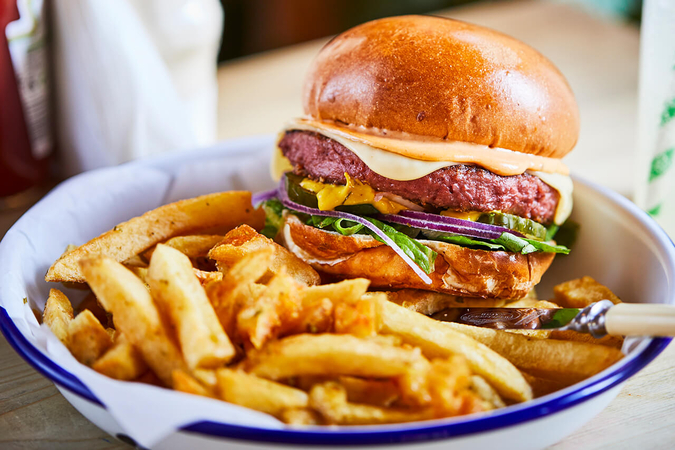 Entrepreneur Seth Goldman took on the beverage industry with Honest Tea, a low-sugar drink he created out of his home in 1998. Honest Tea put him on the food map, was purchased by Coca-Cola and made the Chevy Chase, Maryland, resident a millionaire.

Then he helped shake up the beef industry with Beyond Meat, the plant-based meat substitute that has upended taste buds and Americans' food habits.

Beyond Meat's success has made Goldman a food mogul. His family owns more than 1 million shares of the company, which as of Friday's stock market close is worth about $100 million.

Now he is taking on the food service industry.

Goldman has teamed up with Washington, D.C., restaurateur Spike Mendelsohn and others to launch a quick-serve concept at a Whole Foods Market in Maryland that offers food that is free of animal products. (Whole Foods is owned by Amazon, whose founder and chief executive Jeff Bezos also owns The Washington Post.)

The start-up, known as PLNT Burger, "is a bit of a blend of Honest Tea and Beyond Meat," Goldman said. "We are incorporating organic ingredients, such as our mushrooms and drinks, along with Beyond Meat, into our recipes."

The menu includes the Crispy Chik N' Funguy sandwich, "made from the fruiting body of an organic oyster mushroom." The sandwich was inspired by a visit to a mushroom farm, where Goldman noticed that parts of the mushroom were being thrown away.

"Instead of waste, we are turning it into food that people can consume," he said.

Goldman is the lead investor in PLNT Burger along with his wife, Julie Farkas, and son Jonah Goldman. They have created a holding company called Eat the Change that will produce a broad line of similar, plant-based food that they hope to sell across the country.

PLNT Burger opened its first location at the Whole Foods in downtown Silver Spring, Maryland, in August. Goldman said the restaurant has been successful enough that he and his partners are planning to open more locations.

On a good day, "we are making as much as the previous concept was making in a week," said Goldman, who kept the menu items below $10 to reach a wide audience. "We have our sights set on at least four more locations around Washington this year."

Sales of plant-based foods have surged as more Americans move to reduce their meat intake on health and environmental grounds. Piper Sandler reported plant-based meat could be a $6 billion to $8 billion market by 2025, while Goldman Sachs estimates that the plant-based category will grow to $15 billion in the United States and $47 billion globally by 2029.

Driving Goldman's business plan, in part, is an American Psychological Association study that cited a condition known as "ecoanxiety."

"People are scared and unsure whether their choices are contributing to climate change," he said. Beyond Meat and PLNT Burger are businesses designed to assuage that guilt by having minimal impact on the environment while also serving popular products.

"The climate crisis has broken through to people's consciousness," he said. "It is no longer a problem we will have to worry about 10 years from now, or when our kids grow up. This is more than 'good business.' It is urgently needed business."