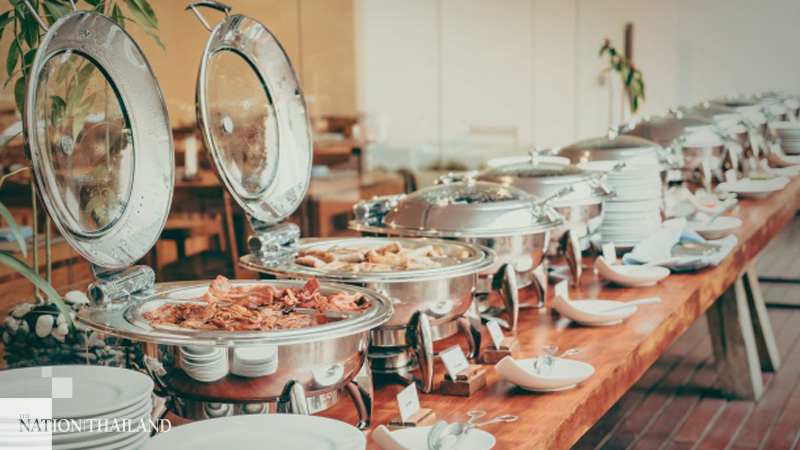 By now, the steps for helping to slow the spread of the coronavirus are familiar: Wash your hands. Don't touch your face. Now, restaurants are adding another item to their own list: Nix the buffets.

The big daddy of such self-serve smorgasbords, MGM Resorts International, which operates hotels along the Vegas strip famous for their generous spreads, this week announced it will temporarily close buffets at seven of its properties: ARIA, Bellagio, MGM Grand, Mandalay Bay, the Mirage, Luxor and Excalibur.

And as the threat of the virus looms, restaurants and other food-service outlets across the country are shuttering or at least casting a germ-wary eye on their own buffets, where communal utensils and boxes offer opportunities for the virus to spread.

Dan Henroid, director of nutrition and food services for the University of California, San Francisco's teaching hospital, says he's eliminating all the self-serve stations in the three campus cafes he oversees - which includes salad bars and serve-yourself cereals and soups, within the next two days. They'll either be converted into served counters or be discontinued, he said.

His goal is twofold: first, to reduce the number of shared touched surfaces, and second, to move customers rather than having them congregate. "The goal is to get them through quickly and encourage them to get things to go," he says.

The Centers for Disease Control has not yet recommended "social distancing" for the general population, but some public-health advocates are suggesting avoiding crowds as a way of slowing the virus.

Crowds haven't been a problem at Masala Art in Washington, general manager Himanshu Kakkar says, but the restaurant stopped offering its daily lunch buffet on Wednesday. Instead, many of the dishes previously available from the communal copper pots will be offered as stand-alone lunch specials. "Things had slowed down," Kakkar says. "We had barely anyone at lunch. People were concerned about the buffets, and it was also a waste of food."

He says the restaurant has been hit particularly hard because many of the weekday clientele are older people who are staying home on the advice of health officials. High-risk people - older people and those with underlying conditions - in areas where the virus is spreading are being advised to "take extra measures to put distance between yourself and other people," according to the CDC, and "stay home as much as possible."

Even fine-dining venues are taking the precaution: The Lafayette, the elegant restaurant in Washington atop the Hay-Adams Hotel with sweeping views of the White House, is replacing its regular Sunday brunch buffet with an a-la-carte-only menu, a representative says.

Public health experts say the potentially problematic part of a buffet isn't the food. Officials say coronavirus is not thought to be transmitted through food, but rather through droplets - from a cough or sneeze - that may be transferred from a hard surface to another person's nose or eyes. Restaurants themselves don't pose any more of a risk than other similarly public venues, they say.

But Aubree Gordon, an associate professor in the University of Michigan's School of Public Health, notes that buffets offer plenty of surfaces where the virus could lurk. "There is a risk of you touching things and then touching your face, and particularly with a buffet you will be handling a lot of utensils that other people have touched," she said.

Restaurants have been scrambling to step up their sanitation practices, mandating more frequent wipe-downs of commonly touched surfaces and monitoring employees for signs of illness.

MGM said in a statement the closures of its buffets would be temporary and that the company would be evaluating them weekly. Not all the Las Vegas casinos are following suit: Local CBS affiliate 8 News Now reported that Caesars Entertainment, among others, is continuing its buffets.

Kakkar says he thinks Masala Art will bring back the buffet when the coronavirus threat dies down. "We will see in 10 or 15 days how people are responding - whether they are coming out or not, and what's happening."

Buffet shuttering is just one step restaurateurs and others are taking. Henroid this week plans to reduce the number of seats in the cafes to encourage less lingering - and to make room for a greater distance between tables.

Henroid says the move comes with challenges, including getting customers - most of whom are faculty, staff and students who dine at the cafes every day and are used to their routines - to adjust to the new setup. And he says he's aware more challenges could lie ahead. For instance, if schools close, child care could become a problem for some of his employees. But he says all he can do is adapt.

"We'll just have to roll with the punches," he says.