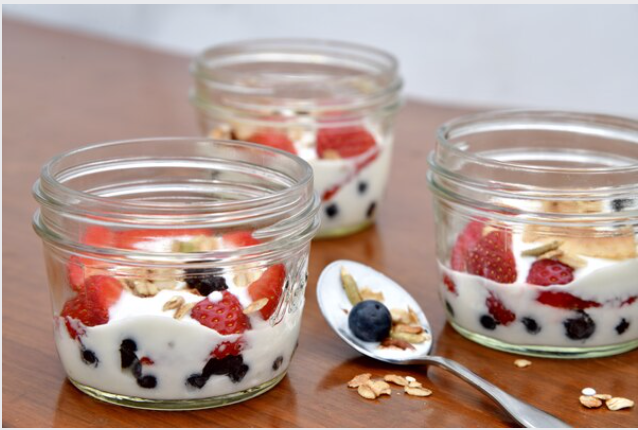 When I wonder about the discovery of certain foods - and I wonder about it a lot - I like to imagine the delight of the first person who popped it into their mouth. Take yogurt, for instance.

It's little more than fermented milk and was most likely an accidental discovery made thousands of years ago. That alchemy of fermentation transforms a humble ingredient, milk, into something nourishing, comforting and versatile.

Eat it plain or showered with granola or drizzled with honey; stir some jam or fresh berries into it; add it to smoothies; use it to marinate chicken; whisk it into dressings or dips; or churn it into frozen yogurt or ice pops. From humble to indispensable - what can't yogurt do?

As we're spending a lot more time indoors because of the coronavirus outbreak, being able to make yogurt has become even more enticing. Plus, it makes for a great chemistry lesson for my 5-year-old, who eats yogurt by the bowlful.

It also allows you to teach a little history, too.

The first traces of yogurt are believed to have been found in Mesopotamia from around 5000 B.C., but it's difficult, if not impossible, to be sure. Today, yogurt is the most popular fermented milk in the world, according to Sandor Katz's encyclopedic "The Art of Fermentation," which is astonishing considering that 100 years ago, yogurt was a regional food, made and consumed primarily across Southeastern Europe, Turkey and the Middle East - and by immigrant communities scattered across the globe.

It has been around for so long because it is so basic and easy to create. To make yogurt, you need milk, preferably whole and not ultrapasteurized, a starter culture (such as plain store-bought yogurt with live cultures or an heirloom culture), a pot with a lid, a heat source and, ideally, an instant-read thermometer - though people have made yogurt without one for millennia, so it's not a requirement.

The bacteria that make the thickest, creamiest yogurt happen are thermophilic, meaning they need elevated temperatures to do their magic. As the bacteria consume the sugars in milk, they produce lactic acid, which is what makes milk proteins curdle. The result is yogurt.

In practical terms, you first need to heat the milk to a range of 180 to 200 degrees - to kill off any unwanted bacteria - then introduce the yogurt starter culture around 110 and 115 degrees and maintain the mixture at that temperature as the yogurt develops.

Because yogurt is a live product, keep in mind that sometimes culturing can take from 6 to 12 hours. Getting it right is a combination of art and science. Don't add more than the indicated amount of starter culture to the yogurt batch or it can lead to over-culturing, which can manifest as a combination of graininess, separation or bitter taste. Warm your milk too fast, and your yogurt might get grainy. If you see your yogurt separating into liquid and solid layers, it's probably caused by over-culturing or culturing at too warm of a temperature. A thin layer of liquid on top of your yogurt is whey and is perfectly natural. Either stir it in or strain it for a thicker yogurt.

Today, grocery shelves are filled with a variety of yogurts. Its contemporary global popularity is linked, for the most part, to two people: Ilya Metchnikoff, a Russian zoologist known for his pioneering research in immunology, and Isaac Carasso, a Sephardic Jewish immigrant who had moved his family from Greece to Spain. The former's research, which focused on longevity, zeroed in on yogurt as a key contributor to health and gave gravitas to the idea that yogurt was a medicinal food. Inspired by Metchnikoff's research, Carasso established a yogurt facility in Barcelona and named his business Danone (later changed to Dannon) - and the rest is history.

To make yogurt at his facility, Carasso used two bacteria isolated at the Pasteur Institute in Paris: Streptococcus thermophilus and Lactobacillus bulgaricus. Today's commercially produced yogurt has one or both listed in the ingredients.

In contrast to commercially made yogurt, the homemade yogurt made using an heirloom starter has a more biodiverse community of bacteria (far more than two) that not only help with self-propagation, but also most likely contribute to its tangier, more nuanced taste.

I had been making yogurt for some time with relative ease. I would mix a little plain store-bought yogurt into my fresh batch of warm milk and wait a few hours for the liquid to set. I'd then use a little bit of that resulting yogurt for my next batch, and so on. But a disappointing thing would eventually happen: My yogurts would thin out and weaken over time.

"Traditional yogurt cultures are evolved microbial communities with a good deal of stability and resilience generation-to-generation," Katz explained. "It seems that their biodiversity scared early microbiologists, so they sought to isolate the strains that were functionally necessary and get rid of the rest."

Isolated strains in commercial yogurt are weaker than "an evolved community," he continued, "and can't perpetuate from batch-to-batch the way heirloom cultures can.

"Thankfully, heirloom yogurt cultures are increasingly available. I have one I've been working with for about 10 years."

One note: With an heirloom starter, your first batch or two may be looser, but it will soon turn out creamy, dreamy yogurt.

Where can you get heirloom yogurt culture? You have two choices: Buy the culture from one of the few places that sell it (I purchased mine at Cultures for Health), or find a friend who makes yogurt using an heirloom culture. I've already shared mine.

Once you pick your starter, your next step is to choose your method. And here's the best part: The best, easiest method requires no fancy equipment, such as a yogurt maker or Instant Pot.

And you can still set it - and forget it. I like to make my yogurt in the evening, and then put the inoculated milk, all snuggled up in a blanket, in my oven with the light on. I wake up to delicious yogurt, and all I did was sleep. Magic!

Because I use an heirloom starter, each batch I make tastes tangier and richer than the one before. The transformation of milk to yogurt never gets old.

If you love yogurt, this homemade version will taste more nuanced, creamier and tangier than any store-bought brand. The only equipment you need is a pot with a lid, an oven with a light and a thick towel. The simple recipe calls for whole milk and a bit of yogurt as a starter. If you are able to find organic, non-homogenized whole milk, it is optimal, but plain whole milk will work, too. Lower-fat milks will result in a thinner yogurt. Do not use ultra-pasteurized milk, as it is not friendly to yogurt-propagating bacteria. You don't have to add heavy cream, but it brings a lovely luxuriousness.

NOTE: For the starter yogurt: If you use store-bought yogurt as a starter, look for plain, whole-milk yogurt with "live cultures" listed on the ingredient label. Using store-bought yogurt will produce fine results, but your batches are likely to weaken over time. If you buy an heirloom yogurt starter or get one from a friend, your batches will be self-perpetuating - meaning you will be able to use a bit of yogurt from one batch to make the next and so on. Keep in mind, if starting with an heirloom yogurt culture you have purchased, your first few batches will be a bit runny, looser than yogurt you might be accustomed to. Keep making it, and the yogurt will thicken as you make subsequent batches. If you want Greek-style yogurt, you can strain it using a fine-mesh strainer and cheese cloth - and strain the yogurt for about 4 hours.

TROUBLESHOOTING: Because yogurt is a live product, keep in mind that sometimes culturing can take anywhere from 6 to 12 hours. If your yogurt is grainy, chances are you heated it too fast over too high of a heat. Take your time with it. If your yogurt separates into liquid and solid layers, this is usually an indication of over-culturing or culturing at too warm of a temperature. Adjust the length of culturing time, and check the temperature at which you are culturing the yogurt to make sure it is within the correct range. If you notice a thin layer of liquid on top of your yogurt, it's whey. Either stir it in or strain it for a thicker yogurt. Don't add more than the indicated amount of starter culture to the yogurt batch as it can lead to over-culturing (graininess and/or separation) and bitter taste.

Storage Notes: The yogurt will keep almost indefinitely. The longer it sits, the tangier it becomes. Try to consume it within 3 weeks. Food and Voraciously editor Olga Massov had one batch she once forgot about for 2 months, and it was delicious.

Where to Buy: Heirloom yogurt culture can be purchased online, including at Cultures for Health.

2 quarts whole milk, preferably organic and non-homogenized (do not use ultrapasteurized milk)

Rinse the inside of a medium heavy-bottomed pot with cold water and add the milk and cream, if using. Set the pot over medium heat, stirring from time to time to prevent scorching on the bottom, and warm until tiny bubbles start to form around the edges and the milk grows a wrinkly skin, 180 to 200 degrees, 10 to 15 minutes. Watch the milk carefully as you don't want it to come to a boil.

While the milk warms, prepare an ice bath in a large bowl wide enough to fit the pot.

Remove the pot from the heat. Place the pot in the ice bath and stir the milk until it is cool enough for you to stick your pinkie in it for 10 seconds, 110 to 115 degrees, 3 to 5 minutes. (You can also cool the milk on the counter, but it will take longer and depend on the ambient temperature of your kitchen.)

Transfer about 1/2 cup of warm milk to a small bowl and whisk in the yogurt until smooth. Whisk the yogurt-milk mixture back into the remaining warm milk. Cover the pot with a lid and keep warm. The easiest way to do this is to cover the pot in a thick towel and transfer the whole thing to the oven with the oven light on.

Let the yogurt mixture sit in the oven with the light on until thick and tangy, 6 to 12 hours - though some batches may require up to 18 hours of propagation. The longer the mixture sits, the thicker and tangier it will become. (The time may vary depending on the warmth in your kitchen.) Transfer the yogurt to containers, cover and chill until completely cold, about 3 hours. The yogurt will continue to thicken in the refrigerator.

Place the milk and the cream, if using, in the multicooker pot and seal. Make sure the steam valve is turned to "pressure." Select the yogurt function and heat the milk to 180 degrees, about 25 minutes. (If using Instant Pot, the word "Yogt" will appear when the liquid reaches temperature.) Uncover, trying not to let the moisture accumulated inside the lid drip into the milk. Turn the yogurt function on again and let the milk warm at 180 degrees for 5 minutes to thicken it.

Turn off the multicooker and transfer the metal bowl to a wire rack. Let it cool until it reaches 115 degrees, about 45 minutes. Alternatively, you can cool it in an ice bath.

In a medium bowl, combine the yogurt starter with 1/2 cup of warm milk, stirring to fully incorporate. Whisk the yogurt mixture into the rest of the milk and return the metal bowl to the multicooker. Seal, and make sure the steam valve is set to "venting." Select the yogurt function and set the timer to 8 hours. When done, the display will read "Yogt." Remove the lid and ladle the yogurt into containers. Cover and refrigerate overnight before eating.