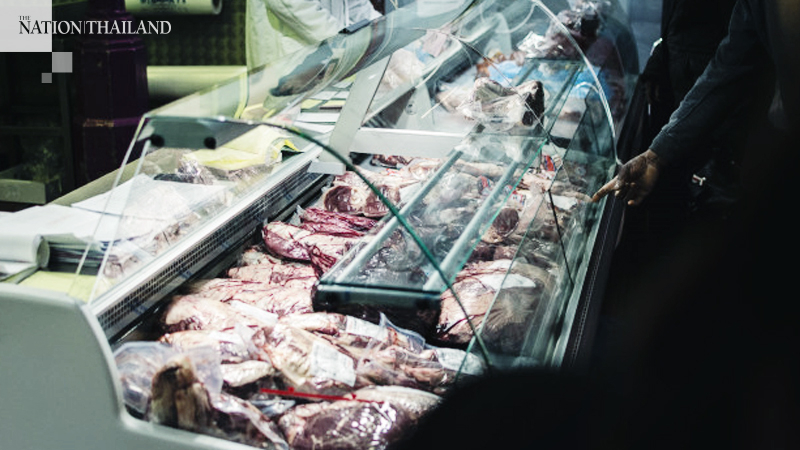 The novel coronavirus has sickened workers and forced slowdowns and closures of some of the country's biggest meat processing plants, reducing production by as much as 25%, industry officials say, and sparking fears of a further round of hoarding.

Before the coronavirus hit, about 660,000 beef cattle were being processed each week at plants across the United States, according to John Bormann, program sales manager for JBS, the American subsidiary of the world's largest processor of fresh beef and pork.

This week there probably will be about 500,000 head processed at U.S. plants still in operation. That's 25% less beef being produced.

Some of the slowdown is because of facility closures. Two of the seven largest U.S. facilities - those with the capacity to process 5,000 beef cattle daily - are closed because of the pandemic.

Some of the reasons are attributable to absenteeism and fewer employees, and some are because meat processing facilities are slowing down and spreading out employees to maintain social distancing.

JBS USA closed its Souderton, Pennsylvania, beef plant April 7 and shuttered its Greeley, Colorado, beef facility after at least 50 of its 6,000 plant employees tested positive for covid-19, the disease caused by the novel coronavirus. All have been urged to self-quarantine.

National Beef Packing announced Monday the closure of its Tama, Iowa, facility. And Cargill shuttered production at its Hazleton, Pennsylvania, ground-beef and pork processing plant, and then reduced production at one of Canada's biggest beef-packing plants after dozens of workers were infected.

The meat supply chain is especially vulnerable to the spread of the coronavirus because processing is increasingly done at several massive plants instead of many smaller facilities. Another problem in the beef supply, according to Bormann, is something called carcass utilization - the use of the whole animal.

"The first problem is we don't have enough people to process the animals, and number two is they can't do carcass balance because restaurants are down," he said. "What's selling? Freaking hamburger."

Restaurants typically use the expensive stuff - strips, ribs, tenderloins and sirloin, Bormann said, while retail takes the chucks, rounds and trims. With restaurants mostly shuttered, "all of a sudden 23% of the animal isn't being bought because food service is gone," he said.

Industry experts said the shutdown of beef processing facilities could prompt another round of hoarding at the grocery stores, as with toilet paper and milk several weeks ago.

U.S. beef sales reached an all-time high in 2019, with 57.7 pounds consumed per capita. Before the pandemic, the National Cattlemen's Beef Association anticipated a similar outlook for 2020.

"Is there a risk that we go through another round of empty shelves?" asked Don Close, senior animal protein analyst in North America for Rabo AgriFinance. "Yes, that's a very real risk right now. And we could see higher prices."

He said meat processing companies could offset the losses due to restaurant closures by increasing exports of premium products. Exports to South Korea have grown sharply in recent months.

"Certain cuts will get more expensive: the grinds and economical cuts like anything off the chuck, minute steaks, London broil," she said. "There are a lot of people out of work, so you'll see an even bigger pull on chicken and inexpensive proteins."

With restaurants closed, some higher-priced cuts may be sold at a discount, she said. "But you can only sell so much at a lower cost before you lose money, so you freeze it."

Close said the nation's cold storage is limited, only a week or 10 days' capacity for supply, so "that's not a long-term option."

Ben Lilliston, the interim co-executive director of the Institute for Agriculture and Trade Policy, said the closure of these large meat processing facilities, and any resultant supply shortfalls, is what happens when a small number of multinational companies controls the food supply.

"They have proprietary information about how much food is out there that no one else has," he said. "In early March there were a whole lot of stories about a surplus of meat. If they say it's a shortage, maybe it is, but no one really knows."