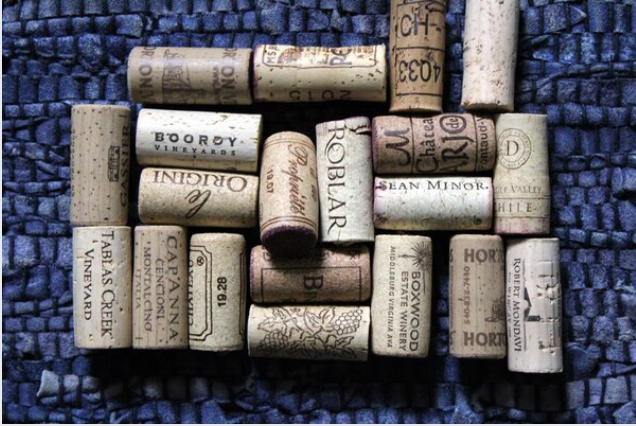 Some of the wine corks from the bottles our wine critic has consumed. MUST CREDIT: The Washington Post

By Special To The Washington Post · Dave McIntyre · FEATURES, FOOD

Over the past few weeks, we've discussed the various stages of wine appreciation. From reading the label and selecting wine in the store; to opening it and assessing its color in the glass; to smelling it and coaxing aromas of the vineyard, the vintage or just the grape; and finally sipping and savoring the wine's texture and structure, we've tried to decipher the story each wine has to tell.

Good wines really do have stories to tell. It may be simple, pleasant conversation, and that's fine most of the time. It may be the polemic of an argumentative teenager, challenging our worldview. Or a friend offering comfort and solace in turbulent times. All can be delicious, and all are valid. We just need to listen and pay attention. Those who say, "Who cares? Open the bottle, down the hatch, the cheaper the better," aren't listening. They insist on doing all the talking, because they may not realize they have something to learn.

You may have guessed by now that I've been reading the comments on my columns and defending my worldview over dinner. Both could make the wine taste more bitter, but they've actually been positive experiences, seasoned with some head shaking. And there has been good conversation, which can be like a fine wine.

When I wrote about wine's appearance, a reader with the handle "Mrs Bates" noted that I neglected to discuss the cork. "The cork tells some important details about the wine," Mrs Bates wrote. "It tells if the bottle was sealed and stored properly."

She has a point. We can get very nerdy about the different types of cork and synthetic closures, their environmental virtues and how they protect against cork taint or allow precisely the right amount of oxygen into the wine to allow it to age properly. Mrs Bates likes her corks spongy, with a bit of a spring when you squeeze on either end, and a ring of color around the base. That ring, either red or a wet stain from a white wine, indicates the bottle was stored on its side or upside down, the wine in contact with the cork. That's conventional wisdom for proper storage, and explains why wine racks hold bottles horizontally.

"Don't forget to sniff the wine-end of the cork," advised another reader, DaveInNY. If the wine is contaminated with cork taint, a chemical called TCA, "the cork will smell like wet dog. Yuck." Well, maybe. Sniffing the cork is suggestive, but not conclusive, about the quality of the wine. A cork may smell fine even after it has tainted the wine, and a wine may be fine even if the cork smells moldy.

However, DaveInNY makes a good point in urging us to inspect a wine's ullage - the gap between the cork and the wine in an unopened bottle, which should be about a quarter to half an inch. A greater gap suggests wine has evaporated or seeped through a faulty cork. This is usually a problem for older wines. The wine may have been stored upright and the cork may have deteriorated over time. If you see excessive ullage in a younger wine (10 years or less) in a store, don't buy it. If you already have the wine in your cellar, open it but have a backup bottle on hand, just in case the first isn't good.

A reader emailed with a question about disintegrating corks. While stuck at home, he had decided to open some older vintages dating back to 1995 from his collection instead of waiting for those special occasions that never seem to come.

"Unfortunately, a couple of times the corks were totally dried out, and I managed to decimate them while opening." The bottles had spent most of their lives stored horizontally, but had stood upright for three months during renovation. Could that be the problem, he asked.

Probably not, I replied, as I've frequently found dried-out crumbly corks in older bottles. The culprit is more likely low humidity in the storage area. I recommended he splurge on a Durand, the ne plus ultra of wine openers, specially designed with older corks in mind. The Durand is a combination of a traditional spiral corkscrew and the two-pronged ah-so opener. You insert the spiral through the cork, then the prongs between the cork and the bottle. A slow twist-and-pull motion removes the cork without the force of a lever that can break it in half. A Durand costs about $125, but if you drink a lot of old vintages, it's worth it.

Several commenters chastised me for advocating alcohol consumption during a global public health emergency that has claimed more than 100,000 American lives and driven millions out of work. This is a wine column, after all. I don't advocate overindulging, of course - I hope everyone will drink better wine and be more mindful about it. And I hope we will continue to support local wineries and wine stores that have been hurt by the economic downturn, especially now that lockdown restrictions are easing for the time being.