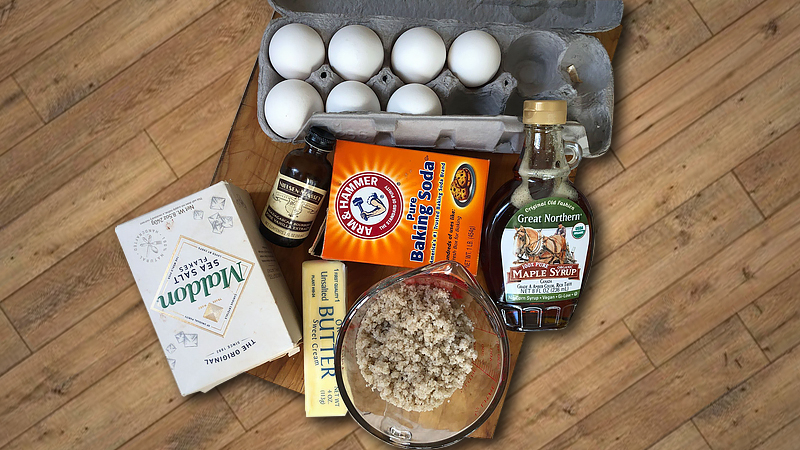 Use high-protein cooked fonio, shown here with the rest of the ingredients, to make healthier pancakes. MUST CREDIT: Bloomberg photo by Kate Krader

One thing you don't hear about right now is a trendy new ingredient. They used to be a hallmark of an ambitious restaurant menu, but even as places reopen, the last thing chefs are thinking about is a product no one has heard of.

As home cooks, we're firmly in the comfort food zone. (Look no further than the rush of love for a good old tuna melt). Sure, you might master a new/old cooking technique such as canning, or bake some bread. (May we suggest a pound cake, instead?) But you're most certainly not going to fool around with an unfamiliar food, one that you might have to throw away-or worse, face as leftovers for the rest of the week.

Luckily, fonio is not a new ingredient.

The West African grain that looks like fine, granulated brown sugar with a wonderfully toasted, nutty taste dates back more than 5,000 years. It's not new to people who track U.S. foods news. A couple years ago, fonio made headlines as a climate-resistant "supergrain" that could potentially ease famine worldwide. In the New York Times, Bloomberg Pursuits' former food editor Tejal Rao called it "the hottest grain you've never eaten."

In addition to trying to save the world, fonio is great because it's versatile, happily at home as a base for a grain bowl, as a simple side dish with grilled and roasted meats, fried into beignets, or cooked with milk as a comforting breakfast cereal. Plus, it's good for you: a protein-rich, gluten-free, nutritional powerhouse high in iron and fiber and filled with such micronutrients as vitamin B and antioxidant flavonoids. The quick-cooking grain is available at Walmart and Amazon/Whole Foods. (If you can't find it, quinoa or couscous are decent, if less interesting, substitutes.)

In the U.S., fonio has a champion in chef Pierre Tham. He's the co-founder of Yolélé Foods, which imports it from small farmers in such African countries as Mali, Chad, and his native Senegal. Fonio stars at his restaurant Teranga in the Africa Center in New York's Harlem district. (He's kept the place open during the pandemic, delivering meals to emergency workers at nearby Mount Sinai Hospital.) "Fonio does everything. It's light, not dense, and you can take it any direction. It absorbs the salty but also the sweet," says Tham. To illustrate the point, Tham wrote The Fonio Cookbook: An Ancient Grain Rediscovered (Lake Isle Press; $25). It contains dozens of recipes that feature the grain, from fonio seafood paella to fonio chocolate cake with raspberry coulis.

One of Tham's favorite recipes in the book is for pancakes, which he hacks by -- you guessed it-- adding fonio.

The result is less like old-fashioned breakfast pancakes than a delicious fritter, puffy and light, with a tender chew. They're terrific as the base for a pile of fried chicken, garlicky sautéed shrimp, or spiced-up grilled or roasted vegetables. But don't discount their appeal as a classic start to your day, topped with melting butter and a stream of maple syrup. (Tham will tell you that the homemade hibiscus syrup he serves them with is even better; more New Yorkers will be able to taste for themselves when his new Teranga outpost opens in Brooklyn's Dekalb Market later this year.)

The following recipe is adapted from The Fonio Cookbook.

In a bowl, combine the eggs, cooked fonio, vanilla, baking soda, and salt. Mix with a whisk or electric mixer until the batter is well-combined.

In a small skillet, melt a little of the oil or butter over medium heat. For each pancake, pour a scant 1/3 cup batter into the hot skillet. Using a metal spatula, push in any sides that ooze out. Cook until the bottoms are golden and bubbles form around the edges, 2-3 minutes. Flip and continue cooking for 1 to 2 minutes, until the pancake is cooked through. Transfer to a warm plate. Continue cooking the remaining pancakes, adding more oil or butter as necessary. Serve with maple syrup (optional).

To Cook Fonio: In a small pot with a lid, coat ½ cup fonio with 1 tbsp. coconut oil or vegetable oil. Toast over high heat, stirring, for 1 minute. Add 1 cup water and bring just to a boil. Stir in a large pinch of salt, then cover and cook for 1 minute. Turn off the heat and let steam, covered, for 5 minutes. Fluff with a fork and serve hot or cold. Makes about 2 cups.

Alternatively: Combine ½ cup fonio with 1 cup water. Cover tightly and microwave on high for 2 minutes. Let stand covered for 3 minutes, then season with salt and fluff.