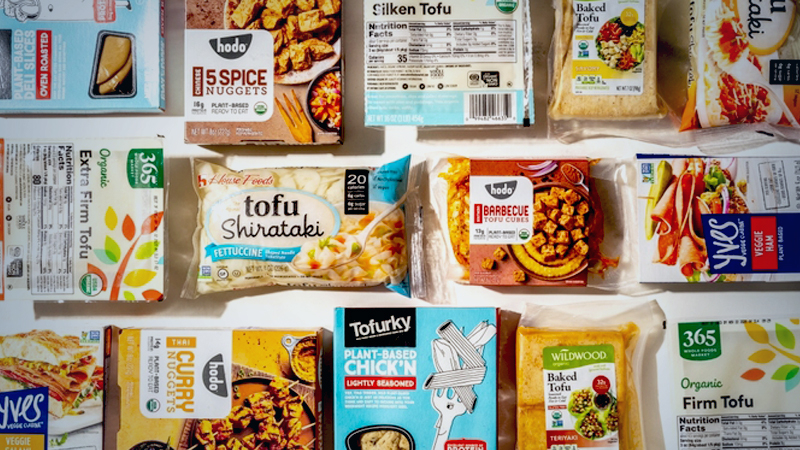 American grocery store shoppers became accustomed to limits on certain household staples during the first half of 2020. The quest for toilet paper, ground beef and hand sanitizer sparked panic buying and supermarket aisle scuffles, while overzealous bread bakers desperately searched for flour and a drop in carbon dioxide supply threatened the soda industry.

But the biggest surprise of this year's covid-19 public health crisis may be a sudden outpouring of love for tofu.

Since U.S. coronavirus shutdowns began in mid-March, tofu shortages have been reported from Seattle to Washington, D.C., with manufacturers struggling to keep up with demand even as grocery stores rationed sales to customers. Nielsen data shows tofu sales 40% higher in the first half of 2020 as compared to last year, while Pulmuone Brands - owner of Nasoya, the nation's No. 1 tofu brand - was forced to ship an additional 1 million packs from South Korea, the world's biggest consumer of tofu, to the United States this summer while their American plants caught up with demand.

"We've struggled for years to figure out how to get more tofu into people's mouths in the U.S.," says Jay Toscano, executive vice president of sales for Pulmuone. "In the past, if we'd had 2% growth in sales from one year to the next, we'd be high-fiving each other. This year we're seeing 20% growth, and we could easily have grown 50% if we could keep up with production."

Why the increase? Several makers attributed the spike to an interest in healthy, affordable proteins as the economy suffered. Consumers also may have been snatching up tofu in response to meat supply disruptions, possibly swayed by a nationwide campaign by PETA that proclaimed, "Tofu never caused a pandemic. Try it today!" after several slaughterhouses were closed because of widespread covid-19 outbreaks among workers.

Either way, Google searches for tofu recipes have doubled since March - and is it any wonder that New Yorkers appear to have been frantic to find General Tso's tofu recipes in the early spring when their favorite restaurants were shut down?

At Allrecipes, a recipe database for home cooks owned by Meredith Corp., the jump in tofu recipe searches over the past few months has been eye-popping: Leading up to the pandemic, such searches had been steadily declining year over year. But in April, Allrecipes said those searches surged 266%, with views of recipes that used tofu as an ingredient reaching their highest level ever in July - and outpacing interest in recipes featuring beef, pork or chicken.

"I was surprised because, within the last couple of years, we've seen an increased focus on vegan, flexitarian and vegetarian diets, but not on recipes with tofu or tempeh," says Esmee Williams, Allrecipes' vice president of predictive trends. "The trend was that you could pursue a meatless lifestyle and still not rely on tofu."

Now, tofu appears to be the prospective star of the plate for a growing audience of Allrecipes users, who have been gravitating toward recipes for crispy fried tofu, tofu breakfast burritos and a Korean-inspired soft tofu stew. And, beyond just looking for ways to cook with tofu, these home cooks also were looking for something very specific as the pandemic shutdowns lengthened and unemployment numbers rose: budget-stretching recipes.

Minh Tsai, CEO of Hodo Foods, which turns some 10 million pounds of soybeans into tofu products each year, sees cost as a factor that has helped drive tofu sales. "For those who have gotten interested in the plant-based trend over the last few years," he says, "tofu is a lot cheaper. You have a segment of people, the traditionalists, who have consumed tofu all their lives, and then a population that was introduced through products like Impossible Burger and Beyond Meat, but ended up trying tofu as a less processed and more economical option."

Often clocking in at about $2 a pound, water-packed tofu can be significantly cheaper than meat and only slightly more expensive than dried beans, while also being a rich source of protein. "A third of our audience says their incomes have been impacted by the pandemic," says Williams, "so it makes sense that there's been interest in tofu."

In the small building in Camden, Maine, where Heiwa Tofu produces 8,000 pounds of tofu a week with a staff of seven, the covid-19 roller-coaster ride has been real, to the point that friends and family were pulled in to help keep up with orders that doubled and tripled throughout the spring.

"It's been a complex year for tofu," says owner Jeff Wolovitz. And with food service shut down at most universities, which are key customers for American tofu companies such as Heiwa, he isn't sure what the fall will bring.

"It's almost hard to see where the trends are going for tofu," says Wolovitz, "because it still continues to fluctuate. It's definitely continuing to grow, but it's also a balancing act."

At Kroger, the parent company of more than 2,700 supermarkets across 35 states and the District, sales of tofu have gone up 30% since May vs. the same period in 2019, according to Kroger's data science and analytics firm. That trend seems to be common across other grocers. Increased online shopping habits have made tofu a product that consumers have the time to consider while browsing for groceries on sites such as Instacart and Peapod, which have seen tremendous growth over the past several months as consumers avoided shopping in close quarters with other customers.

"Shopping online is more leisurely," notes Toscano. "A consumer looks at a shelf in the grocery store for three seconds before moving on, but when they are sitting at a computer, they can look at items and recipes easily at the same time. Retailers are finding that when a shopper places tofu in their online basket, then they add rice, vegetables, soy sauce and additional items to make their meal. It can double the price of their basket, so stores are able to see the impact that tofu can have."

At Pulmuone, the numbers are telling an encouraging story about the demystification of tofu. Just two years ago, the tofu giant was seeing its products in just 5% of American households. Adding baked tofu to the Nasoya lineup increased that penetration to 7%, and now, six months into the pandemic, the number has soared to over 16%. "We're finding that consumers have increased confidence in cooking with tofu," says Toscano.

Still, traditional tofu packed in water is a harder sell, and it's the baked and other ready-to-eat options that are making the most headway at Nasoya and Hodo, with a growing focus on middle America and enticing flavors, such as Mexican and Moroccan.

Pulmuone, too, is placing an emphasis on convenience products, with plans to launch a variety of new options over the next 18 months, while also seeing the need to educate the public on how to cook traditional tofu to cure their "tofobia." "You've got to give tofu some love," Toscano says. "You wouldn't eat fresh pasta right out of the package without seasoning it and cooking it."

And in the end, says Williams, demographics may be what push tofu into the mainstream. "People pursuing meatless diets are usually what we call the 'bookends,'" she says, "younger folks and boomers. For the older generation, it's typically about healthy food options, while Gen Z, where we're seeing the most dramatic growth, is more accustomed to eating outside of the home. Now that they're forced to cook for themselves, they're re-creating the dishes they miss and maybe just experimenting more."

With nearly 50% of the total U.S. population, it looks like it's our oldest and youngest consumers combined who have finally put the joy in soy.