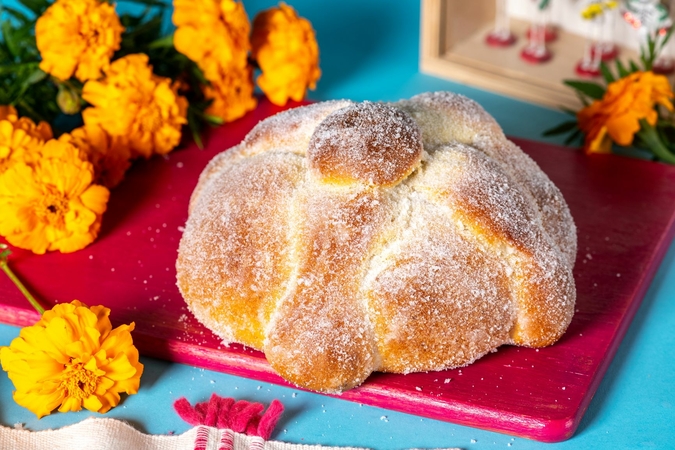 There is a Mexican bread that calls forth the souls of the dead. It's shaped in a round, crisscrossed with bread "bones" and topped with a little round knob. Under a glittering, sugarcoated crust awaits a sweet, rich, pillowy-soft dream fragrant with star anise, orange zest and orange blossom water. Pan de muerto, bread of the dead, is the signature food of Día de los Muertos, a gift to the beloved departed, a meditation for the living.

Día de los Muertos is one of the great syncretic festivals of Latin America. For centuries, Indigenous people of Mesoamerica observed rituals that prepared the dead for their journey through the nine layers of the underworld to Mictlan Opochcalocan, where the soul meets its conclusion. In the 16th century, Spanish priests brought All Souls' Day and All Saints' Day, festivals honoring the dead with gravesite visits and gifts of wine, food and candles - rituals that predate Catholicism itself and that wove themselves into Aztec traditions.

In modern Mexico, in other Latin American countries and increasingly in Latinx communities in the United States, Día de los Muertos spans the first two days of November. Celebrants welcome back the dead with ofrendas, altars bestowed with the deceased loved ones' favorite things, including food, and with marigolds and decorated calaveras, skulls cast from sugar. They burn copal, a fragrant resin, in homage of the wafting spirits.

On every ofrenda, from gigantic communal public art pieces to intimate household altars, you will find pan de muerto. There are dozens of versions of this bread originating from Mexico, but the most common is the round loaf shaped like a skull. The crossed bones reference the four directions of the Aztec calendar meeting together at the heart of the world, called the quincunx; that's the knob.

In late October, I like to buy two loaves of pan de muerto from Fany Gerson of La Newyorkina in New York City. I place one on my ofrenda for my ancestors, and eat the second one right away, since it's luxurious softness doesn't last more than a day or two. (Then I turn my ancestors' loaf into bread pudding after the holiday.)

It was partly through Gerson's bread that I learned about Día de los Muertos. I am Mexican on both sides of my family, but we did not grow up celebrating the holiday. The tradition had fallen away somewhere in past generations. Reclaiming this lost custom has been part of a larger effort to weave my heritage back into my everyday life.

I don't have to do this alone. In cities with sizable Latinx populations, such as San Antonio, Los Angeles and Chicago, Día de los Muertos is usually celebrated as a community event with music, dancing, processions, feasts and face painting. But not this year. In 2020, festivities will be muted, virtual, restricted to small family gatherings, if even that is possible.

The coronavirus pandemic has hit the Latinx community especially hard. In the United States, cases are 2.8 times higher and hospitalizations are 4.6 times higher compared with White, non-Latinx people, according to the Centers for Disease Control and Prevention. This is attributable to a number of factors, from living in multigenerational homes to a greater likelihood of working in high-exposure essential service fields such as agriculture and meatpacking. To be painfully frank, we have more dead to honor this year; and yet the very gatherings that could help heal these losses pose too great a danger to our health.

"This year is definitely going to be different," says Patricia Bedoy, co-owner of the nearly 60-year-old Bedoy's Bakery in San Antonio. The panaderia specializes in a traditional version of pan de muerto in the shape of a man or woman, decorated with colorful glazes. The weeks leading up to Día de los Muertos usually constitute the biggest season for bakeries such as Bedoy's. In years past, they would have baked for mass school and community celebrations. With events canceled this year, it seems likely that family-owned businesses such as hers will take a hit. But worse, Bedoy says there have been "many, many" coronavirus-related deaths in her family.

Bedoy will still celebrate, albeit with a smaller family gathering. And if anything, the circumstances will underscore the meaning of the occasion. "That is going to bring us back to the meaning of that day," she says. "It will have a deeper meaning, I think."

Gerson agrees. "It's almost like we question ourselves, like, is it OK to celebrate, to continue?" But one of La Newyorkina's employees lost his mother to the virus, and Gerson worries that people are being denied the space and opportunity to mourn their loved ones the way they otherwise would. "So this year it feels almost, it feels . . ."; She pauses. "I don't even have the right adjective, to be perfectly honest. But to be able to have a moment where you do stop and celebrate among all this hardship feels especially symbolic." The importance of the celebration feels heightened for her. "I think it's going to be cathartic for a lot of people and especially in the communities, because it's like a collective mourning of sorts."

Gerson, who was raised Jewish, also did not grow up celebrating Día de los Muerto. But when she learned about the practices, they resonated with her, so she adopted them. Most of all, she loves pan de muerto, a bread whose ingredients - wheat and oranges brought by Spanish conquistadors, star anise from Asia - speak to the cultural blend of Mexican cuisine. "This is my favorite bread in the entire world," she says. "There's nothing better to me." And while she could make it all year long, reserving it for this one season makes it all the more special. (Gerson has an excellent recipe in her cookbook, "My Sweet Mexico.")

For me, crafting this bread by hand is an embodied meditation. Through its very corporeal motions, I reflect on all the mythologies around the world of gods creating humans, of how they take substances from the earth and animate them, using nothing more than their bare hands. As I knead, I am aware of my breath, my body, and I am a god using the alchemy of seeds, water and motion to create life. When the dough rises, I admire my creation, filled as it is with spirits. I conquer death, if only for today.

And I connect with my ancestors, who help me see past this momentary crisis. I feel the generations before and the generations to come. I cross dimensions of time and space. My ancestors have seen war, genocide, bondage, heartbreak, and yet here I am, their descendant, working dough in their honor, for now, for those we lost this year, for those who will rise up in the future.

On the days leading to Nov. 1, pan de muerto is traditionally placed on Dia de los Muertos ofrendas, or Day of the Dead altars, along with foods, flowers and mementos of a family's ancestors. Writer Adriana Velez adapted this sweet, soft bread recipe from Mexico City native and Austin resident Janet Kushner's popular YouTube channel Jauja Cocina Mexicana. Velez adjusted the traditional method, which calls for 45 minutes of hand kneading and produces a lighter, more feathery loaf. It now calls for only 15 minutes of kneading. Each loaf serves four living humans or an infinite number of ancestors. Serve with Mexican hot chocolate, or champurrado. 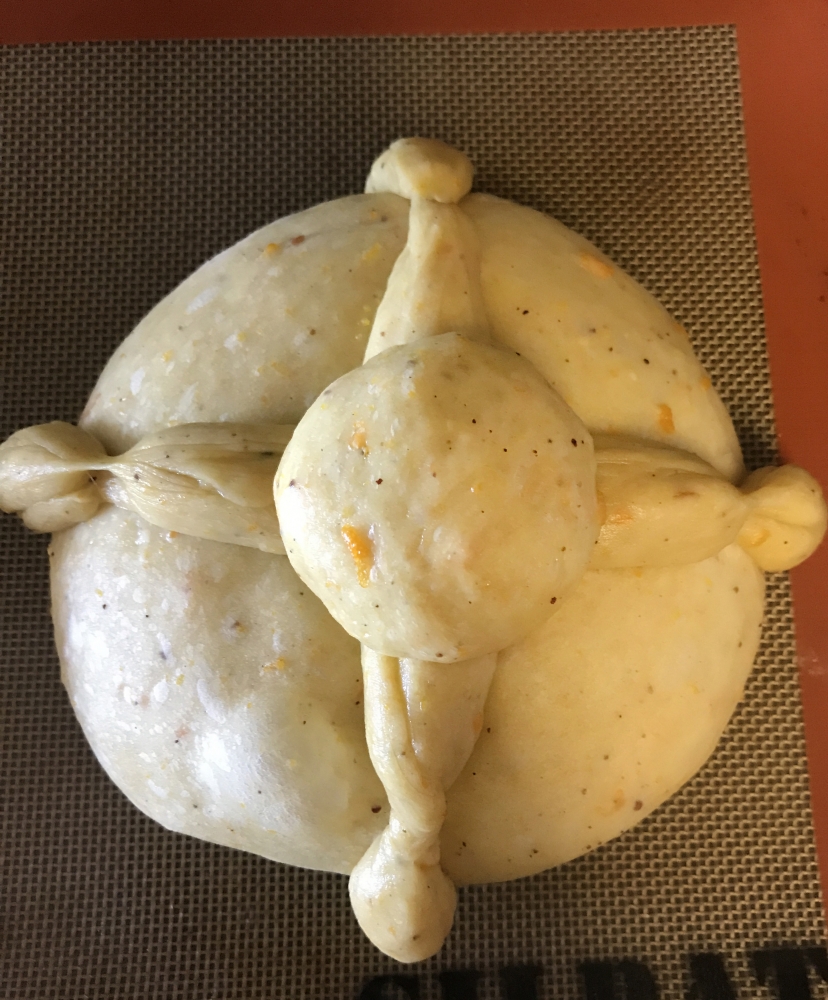 Variations: Flavoring with orange blossom water is traditional, but vanilla extract may be substituted. Fany Gerson of La Newyorkina Bakery mixes in chopped Mexican chocolate. You could also add ground cinnamon to the sugar glaze.

Storage Notes: Leftover bread can be stored at room temperature, tightly wrapped, for up to 2 days.

6 tablespoons (85 grams) unsalted butter, cut into small pieces, plus 2 tablespoons (30 grams) melted and cooled to brush over the finished loaves

1 tablespoon canola or another neutral oil

Make the sponge: In a small bowl, using a fork, mix together the yeast, flour and sugar until combined. Add the milk and orange blossom water and gently mix to combine. Cover the bowl with plastic wrap and set it aside in a warm place until the sponge is foamy, about 10 minutes.

Make the dough: In the bowl of a stand mixer fitted with the dough hook attachment, combine the 3 cups (360 grams) of bread flour, 1/2 cup (100 grams) of sugar, orange zest, star anise and salt and mix on medium speed until well combined. Add the eggs and the foamy sponge and continue to mix on medium-high speed until a rough dough has formed.

[If making pan de muerto by hand, whisk together 3 cups (360 grams) bread flour, 1/2 cup (100 grams) sugar, orange zest, star anise and salt in a bowl and form a well in the center. Whisk the eggs and then pour them, with the sponge, into the center. Knead in the bowl with a plastic scraper until combined, then mix in the butter a few pieces at a time and knead for 10 minutes. Dust a clean, cool countertop with a 1/4 cup (50 grams) flour, turn out the dough, and knead until the flour is incorporated, an additional 5 minutes. Do not add too much flour as you knead the dough or the final bread will be dry and dense.]

Grease a large bowl with 1 tablespoon of oil. Transfer the dough to the bowl and roll it around to grease all over. Cover the bowl with plastic wrap and let it rise in a warm place until doubled in size, about 1 hour.

Turn the dough out onto a clean, dry counter. Cut off a roughly baseball-size (200-gram) piece of dough and reserve. Divide the remaining, larger piece of dough in half. Shape the two larger halves into smooth rounds by cupping your palms around them, rolling and dragging them gently toward you. Lay each round on the lined baking sheet, at least 3 inches apart.

Make the "bones": Divide the reserved dough into 5 pieces, with four equal-sized pieces and one piece slightly smaller. Roll the four equal-sized pieces into ropes long enough to cross over each loaf, about 5 inches long. Spread out your index, middle and ring finger and use them to roll and press indentations into each short rope of dough, so they resemble bumpy bones. Lay two "bones" across each loaf, forming a cross in the center on the top. Gently tuck the ends under each loaf. Divide the fifth, smaller piece of dough in half and roll each half into a ball. Using your index finger, gently press into where the crosses intersect to form a dimple. Place one of the dough balls into each dimple, pressing gently to adhere it. Cover the loaves loosely with plastic wrap, and let rise in a warm place until doubled in size, about 1 hour.

Bake the bread: Position a rack in the center of the oven and preheat to 350 degrees for at least 10 minutes.

Remove the plastic wrap from the risen loaves, and transfer them to the oven. Bake for 20 to 25 minutes, or until deep brown. Transfer the bread to a wire rack and let cool until easily handled, about 30 minutes. Brush each cooled loaf with 1 tablespoon of the melted butter and sprinkle the sugar evenly over the loaves, letting the excess roll off.

To serve, slice the bread into wedges, or tear it apart with your hands.