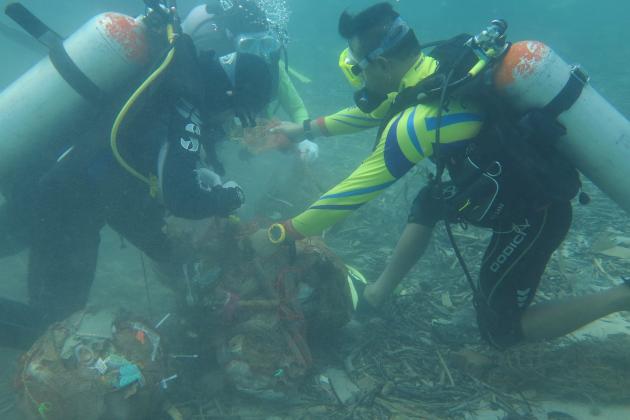 AN underwater garbage-cleanup operation off Karon Beach in Phuket yesterday removed hundreds of kilograms of trash – including from a coral reef.
The Office of Marine and Coastal Resources Management 6 led the operation to clear the garbage field, near Sai Cape, south of Karon Beach.
Also involved in the operation were local authorities, the local long-tail boat club and about 100 volunteers.
The cleanup followed pictures of the garbage field going viral on Thai social media last week.
OMCRM6 director Wascharin Tintalang said the garbage field had covered an area of about 400 square metres.
He said it mostly consisted of plastic bottles, other plastic garbage, wood sticks, glass and fishing nets.
Wascharin said the garbage was carried there by currents from many places and stayed in the area because it was an underwater basin.
“We have already removed 200kg of trash this morning [yesterday morning] and we have removed all the garbage from the coral reef area,” he said.
“I am sure that we can remove all the garbage within this evening [yesterday evening]. And if there is still some garbage left, the Tambon Karon Administrative Organisation will continue the cleanup operation next Thursday.”
Up to 650 kilograms of trash was collected yesterday, with some 100kg remaining.
Wascharin said water currents could bring more garbage to the area in the future.
But despite the extent of the garbage problem prior to the cleanup, he said the coral was in a good condition and there was plenty of marine life in the area.
Marine biologist Thon Thamrongnawasawat stressed that sea garbage was a very severe problem for Thailand.
“Thailand dumps approximate 2.7 million tonnes of garbage into the sea annually – 2.2 million tonnes of which is plastic, which can hardly decompose and is very toxic to the marine ecology,” he said.
“Every year hundreds of marine animals die from eating plastic.”
Thon said more proactive measures needed to be implemented such as enforcing strict littering laws, making people pay for using plastic bags at stores and enforcing restrictions on the use of plastic in national parks.
“We have been campaigning not to litter in the sea for years, but there is no solid progress,” he said.
“We need to enforce the garbage control laws to address this problem.”