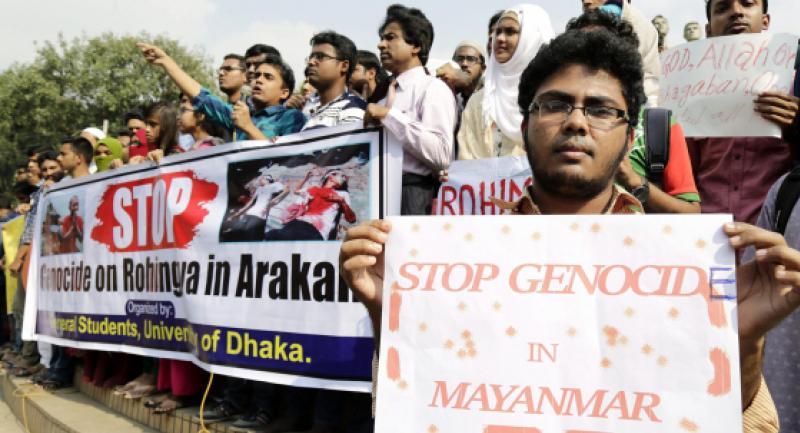 The Bangladesh coast guard Monday prevented 125 Rohingyas, including women and children, from entering the country's territory through the Naf River, as the group attempted to escape violence in Myanmar.

The Rohingyas on seven small fishing boats tried to infiltrate early in the morning. They were pushed back by the coast guards patrolling the river, which separates Bangladesh's southeastern border from western Myanmar.

They included 36 children, 61 women and 28 men, he told some reporters in the afternoon.

"There were 125 Myanmar nationals in seven wooden boats. They included 61 women and 36 children. We resisted them from entering our water territory," Nafiur told AFP.

All of the passengers were Rohingya who tried to enter Bangladesh amid an uptick of violent clashes in neighbouring Myanmar's Rakhine state, he said.

The official added that to monitor the movement of the Rohingyas the patrol by coast guards along the river has been increased.

On November 15, Border Guard Bangladesh (BGB) stopped 86 Rohingyas on two boats from entering Bangladesh through Hnila and Sabrang in Teknaf. They were sent back, reports the Cox's Bazar correspondent of The Daily Star.

Lt Col Anwarul Azim, commanding officer of BGB in the Cox's Bazar sector, said those turned away had been provided with food and medicines.

Rohingyas are trying to escape the military crackdown after a recent escalation in violence in Rakhine State, say residents, adding that some of them have been gunned down while attempting to cross the river that marks the frontier with Bangladesh.

According to the UN, up to 30,000 people have been displaced by violence, half of which occurred during the last week when dozens of people died in clashes with the military.

The resurgence of violence has deepened a crisis that has already threatened to derail the new administration led by democracy icon Aung San Suu Kyi.

The Information Taskforce on Rakhine, formed this week by the office of Nobel Peace Prize winner Suu Kyi has rejected the allegations against the military, known as the “Tatmadaw” in the Burmese language.

"Regarding those incidents, after asking the Tatmadaw and border guard troops in those regions, it is known that the information is absolutely not true," said the State Counsellor Office Information Committee in a Facebook post.

The office added that the military and the border guard troops had not conducted operations near the border and were only engaged in an "area clearance operation" in the "inner part" of the state.

The UN envoy on human rights in Myanmar, Yanghee Lee, criticised Suu Kyi's handling of the crisis and renewed her appeal to investigate the allegations of abuses.

"State Counsellor Aung San Suu Kyi has recently stated that the government is responding to the situation based on the principle of the rule of law. Yet I am unaware of any efforts on the part of the government to look into the allegations of human rights violations," she said.

"It would appear, on the contrary, that the government has mostly responded with a blanket denial, she said, adding that security forces "must not be given carte blanche to step up their operations".

Reuters reports that soldiers have poured into the north of Rakhine along Myanmar's frontier with Bangladesh, responding to attacks by alleged Muslim militants on border posts on October 9.

They have locked down the district, where the vast majority of residents are Rohingya, shutting out aid workers and independent observers.

Sixty-nine suspected insurgents and 17 members of the security forces have been killed, according to official reports, since the violence began last month.

Residents and rights advocates have accused security forces of summary executions, rape and setting fire to homes. The government and army have rejected the accusations.

Up to 30,000 people are now estimated to be displaced and thousands more affected by the October 9 attacks and the following security operation, said Pierre Peron, the spokesman of the Coordination of Humanitarian Affairs (OCHA) in Myanmar.

"This includes as many as 15,000 people who, according to unverified information, may have been displaced after clashes between armed actors and the military on November 12-13," said Peron.

He added that humanitarian operations that had been providing food, cash, and nutrition to more than 150,000 vulnerable people have been suspended for 40 days.

More than 3,000 children have not received their regular treatment for severe acute malnutrition (SAM).

"Without appropriate treatment and care, many children with SAM are at risk of dying," said Peron.