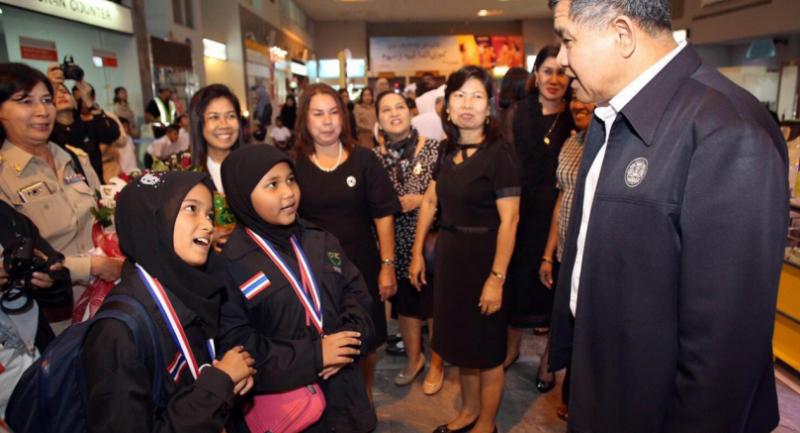 Education Ministry focuses on safety in the deep South

MAINTAINING STUDENTS’ academic performance in the violence-hit deep South has been no easy task.
In pursuit of that goal, Deputy Education Minister Lt-General Surachet Chaiwong has decided to focus on safety when addressing education problems in the region. As soon as he was given the portfolio in 2014 and assigned to deal with education in the southern border provinces, the minister immediately prioritised safety and set up the Forward Command of the Education Ministry.
He has been spending most of his time in the deep South since taking office, and in the past two years or so his efforts have yielded fruit.
By 2015, fewer teachers were being killed and local students performed slightly better overall in the Ordinary National Education Test (Onet) compared to a year earlier.
“Safety must come first. It is of crucial importance that everyone treats safety seriously and strictly follows safety measures,” Surachet said. “Only when teachers’ hearts are not heavy with safety concerns, can they be motivated to focus on teaching.”
Although students are not the primary target of the attacks in the South, teachers often are. Teaching staff have been either killed or injured in the region despite security escorts. In 2014, nine teachers were among victims of the unrest.
Surachet decided to place heavy emphasis on boosting teachers’ safety, setting a clear line of command from the provincial level to school level to ensure that teachers knew exactly whom they had to work with in relation to safety plans. As a result, teacher casualties in the region dropped to just one death and one injury in 2015.
“Teachers have been told to only use routes designated by security officials. If they need to use other routes, they must inform security officials in advance,” Surachet said.
There are nearly 1 million students in the deep South, with covers the provinces of Pattani, Yala and Narathiwat as well as some districts of Songkhla, with nearly 75,000 teachers and lecturers.
With teacher casualties dropping in the region, students’ academic performance has been on the rise.
Mathayom 6 students in Pattani, Yala, and Narathiwat have achieved higher scores on average in five key Onet subjects. Narathiwat-based students scored 28.63 points in 2015 versus 26.82 in 2014; Yala-based students scored 28.57 versus 26.70 in 2014; while Yala-based students achieved scores of 29.52 in 2015, up from 27.29 in 2014. Mathayom 3 and Prathom 6 students in the deep South also scored higher in 2015.
“Apart from safety, we have been striving to integrate efforts made by all concerned agencies”, Surachet said, adding that more needed to be done although the authorities were on the right track.
However, students in southern border provinces are still scoring lower than students in other parts of the country. For instance, Mathayom 6 students in other parts of the country scored 33 points in 2014 and 34.81 in 2015 in Onet, but when categorised by home provinces, the average score of students in the deep South was between 26.70 and 27.29 in 2014 and 28.57 and 29.52 in 2015.
“For 2017, we have prepared 127 projects and set aside Bt2.7 billion to provide educational support to teachers in the region. We are also going to provide additional equipment and materials,” Surachet added.
He said authorities had assigned at least one volunteer or teacher from non-formal education offices to each pondok, or Islamic school, in order to ensure the schools can provide secular education as well religious instruction.
“In the non-formal education sector, we are providing many short-term vocational courses as well,” he said.
He added that more than 16,000 scholarships had been provided in the region per year, including projects to promote sports among local students.
“At least six schools in the southernmost region now offer sports-arts programmes at the senior secondary level. Children with a grade point averages of above 2 in the junior secondary level can now apply for scholarships,” he said. “We will introduce two such programmes to two more schools in the coming academic year.”
Surachet added that educational initiatives and efforts in the South had been developed and implemented in response to feedback and contribution from all stakeholders.
“I am satisfied that improvements are visible,” he said. “Of course, I ensure all relevant parties strive harder in the pursuit of raising educational standards in the deep South to bring them up to par with other parts of the nation.”