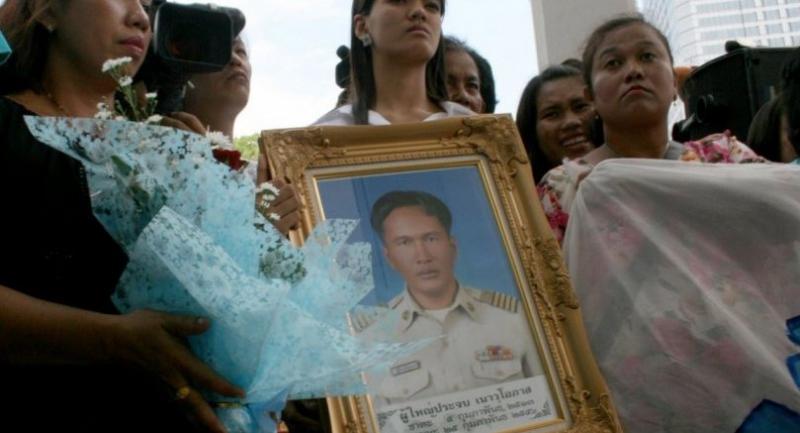 THE APPEAL court has dismissed charges against a factory owner who allegedly hired a hitman to kill community leader Prachob Naowa-o-pas, who stood against the disposal of industrial waste in Chachoengsao’s Phanom Sarakham District.

The plaintiffs expressed their disappointment yesterday and pledged to appeal to the Supreme Court, as the Appeal Court ruled in favour of defendant Phuthorn Kaweephan in the case of the community leader’s assassination because of a lack of evidence and dismissed the charges against him.
Phuthorn was sentenced to the death penalty by the Criminal Court in December 2014, after the court ruled that he had offered a contract to murder Prachob. Two defendants, chief petty officers Yutthanai Nachaeng and Anu Bunpeng, were sentenced to life imprisonment for premeditated murder.
John Naowa-o-pas, Prachob’s brother and a plaintiff in the case, said the Appeal Court had dismissed the allegation against Phuthorn because of weak evidence linking him with the two other defendants.
“The court reasoned that phone call evidence, which showed that the first defendant had regularly contacted the other two defendants before, during and after the assassination, was too weak to prove that the first defendant was involved in the murder because there was no record of what they had talked about on the phone,” John said.
He said this was the key evidence for the Criminal Court to rule that Prachob committed contract murder and admitted that he was disappointed with the Appeal Court’s judgement.
“I respect the court judgement, but we will hire a new legal team and appeal to the Supreme Court in order to seek justice for my late brother, who fought hard and sacrificed his life to protect the environment of our community,” he said.
Prachob was village chief of Moo14 Tambon Nhong Nae and he took an active role in protesting against the nearby recycling factory owned by Phuthorn, who was also an officer in the Industrial Works Department. The factory was allegedly dumping industrial waste illegally and polluting the environment.
Prachob was shot dead in February 25, 2013 by two gunmen.
John said his brother and Phuthorn had a deep conflict over the issue, which was the main reason for his brother’s killing.
“Up until now that factory is still operating and causing air and water pollution affecting the nearby communities. We have fought on this issue for more than 10 years, but there are still no sustainable solutions,” he said.