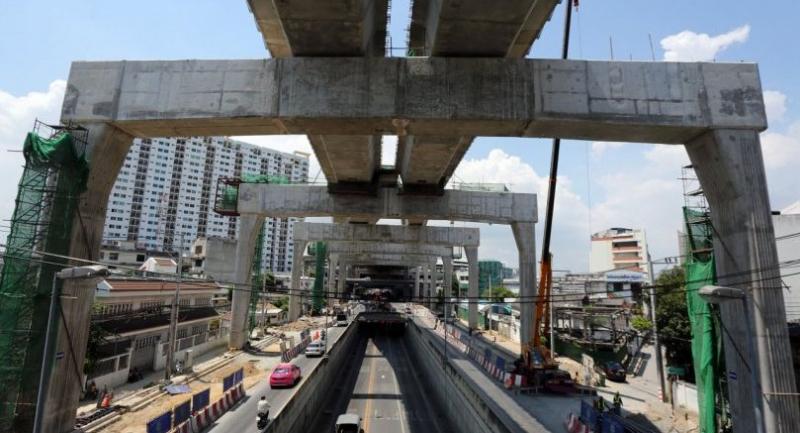 RESIDENTS in Bangkok and neighbouring areas like Nonthaburi and Samut Prakan are seeing changing landscapes and new landmarks emerging in different areas – as many mass-transit projects are now under construction.

Several urban and suburban areas of the capital now have elevated structures overhead, with train tracks on bridges crossing the Chao Phraya River, old buildings disappearing, and new junctions in the making.
A lot more changes will be visible when many projects – some underground, some elevated and others a combination of the two – are completed in a few years’ time.
Many shop-houses and buildings have been expropriated for train stations, both above ground and elevated. Many areas adjacent to the train routes have already witnessed a boom in real estate development, with condominium projects having sprung up for people who prefer the convenience of rail travel to go to work or school.
Tha Phra Intersection, on the Thon Buri side of Bangkok, will house a key interchange station for the Metropolitan Rapid Transit’s Blue Line. When construction of the Blue Line’s extended section is finished in October 2019, it will complete the circular route – the only one in the country.
The three-way Fai Chai Junction will become a four-way intersection when construction of a new road is completed. The junction also houses one of the Blue Line stations being built under Charan Sanitwong Road. During World War II, spotlights were installed at this junction to help anti-aircraft guns find Allied bombers attacking at night. That is where its name comes from – Fai Chai means ‘flashlight’. The area saw frequent bombings as strategically significant targets such as a train station and a naval dockyard were located there.
Physical changes are also taking place or in set to occur in areas such as Tao Poon, Bang Sue, Rat Burana and Bang Pho in Bangkok, as well as Bang Yai district in Nonthaburi and the Samrong area in Samut Prakan.
Given there are plans for Bangkok to have a mass-transit network that extends over 500 kilometres, it’s safe to say the dramatic changes to the city’s landscape will go on for some time – over a decade, if there are no further delays.