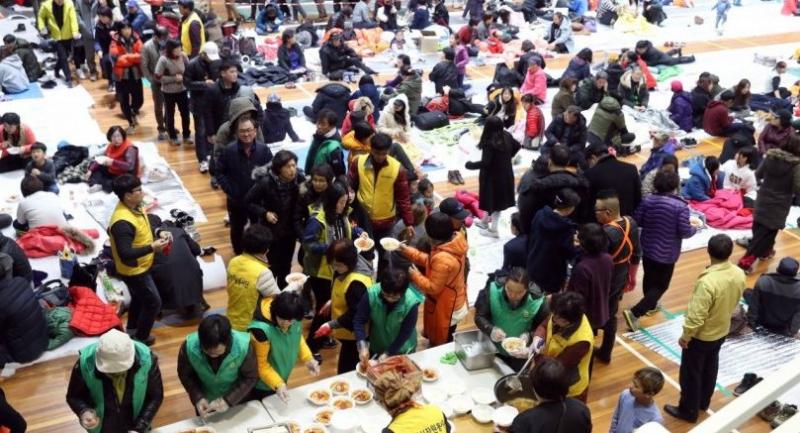 More than 50 people were injured and 1,500 taken to shelters in South Korea after a rare 5.4-magnitude quake hit the southeastern port of Pohang on Wednesday, officials said Thursday.

The second-most powerful quake recorded in the South hit at a shallow depth of nine kilometres (six miles) on Wednesday afternoon, sparking alarm in a country that rarely experiences significant tremors.

The quake, which was felt across the country including in the capital Seoul, damaged nearly 1,100 homes and more than 100 schools, the safety ministry said in a statement.

Roads and public and military facilities were also damaged, while 57 people were left injured and 1,536 seeking shelter outside their home, it said -- adding no deaths had been reported.

A car damaged by falling bricks after a 5.4-magnitude earthquake is seen in the southeastern port city of Pohang on November 15, 2017.// AFP PHOTO

It came about a year after the country's most powerful quake to date, a 5.8-magnitude tremor that struck another southeastern city, Gyeongju, in September 2016.

One video posted on social media showed dozens of students screaming and fleeing in panic as a large brick facade crumbled and fell off the top of a campus building.

As dozens of aftershocks continued to rattle Pohang, Seoul late Wednesday announced the unusual decision to postpone the country's all-important nationwide college entrance exam -- scheduled for Thursday -- by a week.

The annual event is closely watched by the whole nation, which falls silent on the day to help teenagers focus on the test whose result could define their future in the hyper-competitive society.

It was the second time the test has been postponed since 1992, when several test papers were found missing a day before the exam, forcing authorities to delay the event by several weeks.

The Korean peninsula, unlike its neighbour Japan, rarely experiences significant quakes but seismic activity is closely monitored because a spike in activity is often the first indication that North Korea has staged a nuclear test.