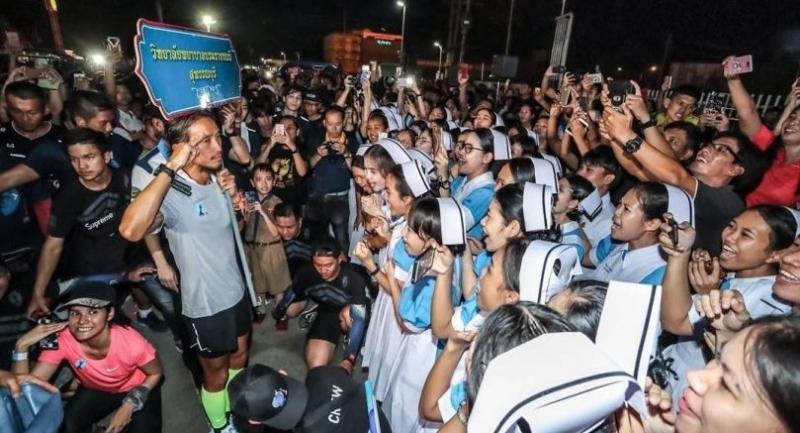 One day after donations for rock star Artiwara “Toon” Kongmalai’s charity run topped the Bt700-million target, rumours began to spread on social media that the government would tax the sum at 7 per cent.

But the rumours – which claimed the tax collected would be spent on improving police stations – were quickly denied on Sunday by government Spokesman Lt-General Sansern Kaewkamnerd.
“The report is totally groundless. I’m not sure of the real intentions of those who created the information, but they are an ill-intentioned group of people,” the spokesman said.
The government of Prime Minister General Prayut Chan-o-cha never had such a policy, Sansern said, adding that the government had supported Toon and his team in achieving their goal.
Sansern also dismissed widespread reports that Prayut had donated just Bt20 to Artiwara’s campaign when he met the rock star at Government House recently.
“It’s not true. However, the sum donated by the premier will not be revealed, as he does not want society to discuss it or argue over it. A donation is a matter of the feeling and heart of each donor,” the spokesman said.
He said the government wished that people would follow the news with discretion so they did not believe fake or distorted information shared online.
“We ask those who disseminated fake or false information to stop these acts or face serious legal action,” Sansern said.
Donations to the talk-of-the-town charity run yesterday topped Bt716,206,770.
According to the campaign’s website, kaokonlakao.com, as of press time Artiwara had completed 1,510 kilometres of the 2,191km marathon that has seen him run from the deep South province of Yala with the intended destination in the northernmost province of Chiang Rai.
The aim of the epic run was to raise Bt700 million in donations over 55 days to buy equipment for 11 hospitals.