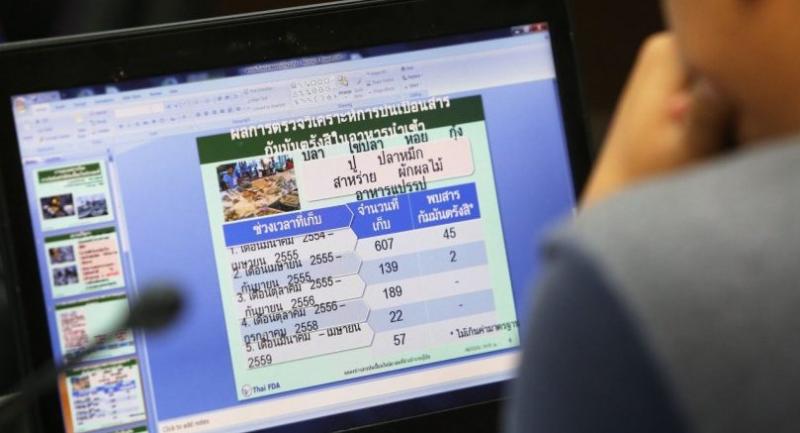 AUTHORITIES HAVE defended Thailand’s importation of fish from Fukushima, the scene of a major nuclear accident and radioactive leak in 2011.

“The imported fish have passed radioactive standards of the [Thai] Food and Drug Administration [FDA],” the Fisheries Department’s deputy director-general Umaporn Pimolbutr said yesterday. She spoke after concern was raised about the imports.

FDA secretary-general Wanchai Sattayawuthipong, who later in the day appeared with Umaporn at a press conference, urged Thais not to panic.
“You can have confidence in the FDA and relevant organisations,” Wanchai said. “If we detect any contaminated fish, we will destroy or immediately return the item.”
A report by Japan Times revealed on March 1 that Fukushima prefecture’s first shipment of fish since the March 2011 accident had been exported to Thailand.
The crisis in Fukushima is often described as the worst nuclear accident since the Chernobyl incident in 1986.

Last month, a report by The Independent also revealed that lethal levels of radiation were still being detected at Japan’s Fukushima nuclear power plant, seven years after it was destroyed by an earthquake and tsunami.
“I cannot confirm as to whether we are the first to import fish from Fukushima [since 2011]. But I can tell you that we have checked the imported fish,” Umaporn said.
Thailand bans the importation of food that has more than 100 becquerel of iodine 131 per kilogram/litre or combined concentrations of caesium 137 and 134 more than 500bq/kg/litre.
Importers must produce certificates specifying the amount of radioactive substances and the origin of the food.
“The certificate must be issued by a government agency from the country of origin or any institute recognised by the relevant government agency of the country of origin,” Umaporn said.
She added that Thailand had never tried to block seafood exported from Japan.
“If it passes radioactive standards set by the Public Health Ministry, then it can enter Thailand,” she said.
She added that 130kg of flatfish and sole had arrived in Thailand on February 28.
The Japan Times reported that the fish would be served at 12 Japanese restaurants in Thailand.
Public opposition to the importation was expressed by one consumer in Thailand who wrote online: “Is the only thing the Fisheries Department will do is just check certificates? There is no other responsibility here?”
Another netizen sarcastically compared Thais to guinea pigs in labs to test the impact of fish that might have been contaminated.
Wanchai downplayed public concerns by emphasising that the FDA had worked closely with Japan’s Public Health Ministry to uphold the standards of imported food.
He said Japan’s Public Health Ministry had collected 7,408 seafood samples in Fukushima. Of them, only eight had a higher concentrations of radioactive substances than allowed. Of these eight samples, four were whitespotted chars and four others were cherry salmon.
“Thailand has not imported these types of fish,” Wanchai said.
He added that his agency had also conducted tests on various fish and other seafood samples in Thailand to determine if any had been contaminated with radioactive substances.
“There has not been a single case of contamination,” he said.
Wanchai said the Medical Sciences Department also conducted random tests between March and April, 2016 and found no contamination.
“In the event you suspect that any food product may be harmful to health, alert us via Hotline 1556 or the Oryor Smart Application,” he said.