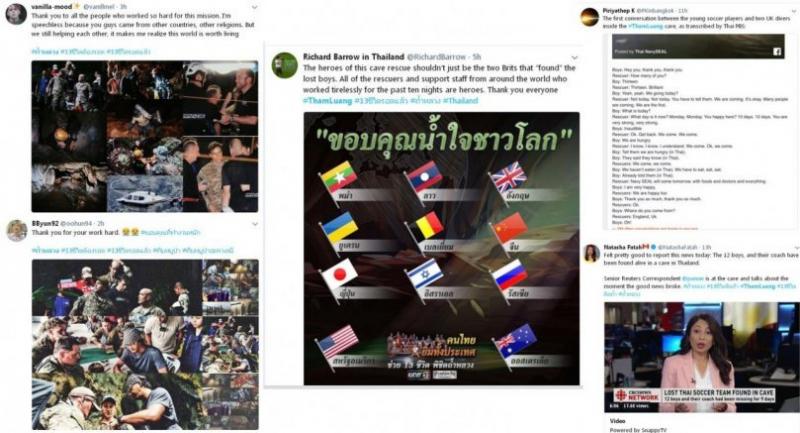 WHEN NEWS was confirmed that the British cave diving experts had found the 13 members of Mu Pa Academy football team who had been trapped in a Chiang Rai cave, their families and rescue teams erupted in tears of joy.

So did the netizens.

Throughout the 10 days since the teenagers and their coach went missing in Tham Luang cave, users on all social network platforms – Facebook, Twitter and Line – were busy creating many kinds of online support, including cartoons, drawings and songs for the rescue operation and the missing group.
They were united in wishing for the safe return of the team that they had never met.

Since Monday night, when the footballers were located, Facebook and Twitter was full of overjoyed expressions of happiness and smiles. A popular posting on Facebook was “Found” with bright coloured background and “I’m on top of the World. So Happy for their families”.
The most shared and seen video clip, believed to exceed a million, was when the British divers found the missing group sitting on a |ledge, about 400 metres from Pattaya Beach, which was initially believed to be where the group was stranded.
Twitter users shared the clip, saying “see with your own eyes” while a user posted the clip on his Facebook, saying “this is confirmed. Hooray”.

As the conversation between the divers and the boys was in English, it was subtitled. The clip was re-run repeatedly in television news programmes in Thailand and other outlets across the world.
A facebook user drew a cartoon depicting the missing team all smiling and wrote “welcome home”.

One of the popular postings on Facebook were expressions of thanks and appreciation for the hard work of rescue teams and volunteers at the scene.
A user produced a cartoon to say thanks for the hard work throughout the 10 days, with characters from the Army, the Navy, the SEALs, the volunteers and foreign experts who came to help rescue the boys.