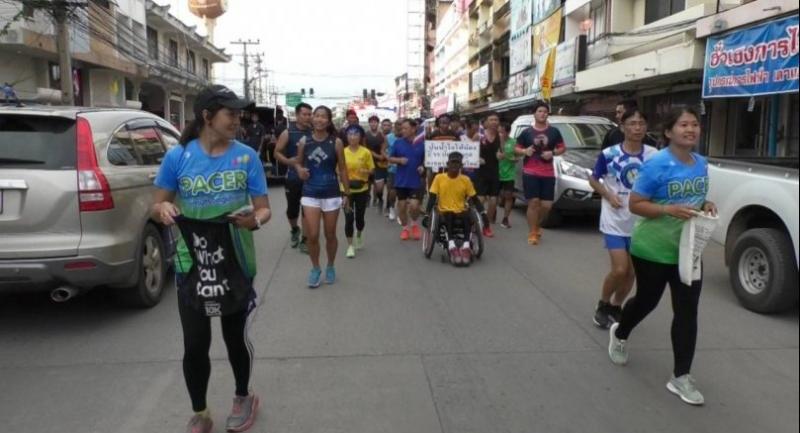 A 55-YEAR-OLD wheelchair-bound Phitsanulok man, who is in the middle of a 1,400-kilometre wheelchair run from Songkhla to Chiang Mai to raise money for 48 schools for disabled children, continued his marathon journey from Samut Songkram’s Muang district on Wednesday.

Many residents lined the roadsides to cheer on and hand over cash donations to Sathit “Uncle Mhee” Chantharangsi, who is wheelchair-bound due to myasthenia gravis, a chronic autoimmune disease that causes weakness in the skeletal muscles and impairs breathing.
During the section of his ride through the central province’s Mae Khlong Market on Wednesday, Sathit received a further Bt30,528. That means that so far the campaign – dubbed Pan Namjai Hai Nong Rongrian Panyanukul 48 Haeng Tua Prathet” (“caring for children at 48 Panyanukul schools nationwide”) to raise money and awareness of the difficulties faced by special-needs children -– has now raised a total of Bt1,028,757.

Each day of the journey, Sathit – who is accompanied by several runners – covers at least 30 kilometres in a difficult way: by a hand spinning of the vehicle’s wheels.
He expects the entire journey to be completed by 40 days.
He has been sleeping in his tent or staying over at schools or temples during his epic ride.
Sathit said he wasn’t a famous person so he didn’t know how much money he should expect to raise from this long-distance ride.

He humbly said that he just hoped that people found his campaign inspiring and would join his cause to help the disabled children.
This isn’t the first time the avid cyclist has done a long-distance ride in his wheelchair.
In October 2016, he travelled 200 kilometres by wheelchair, from his hometown Phitsanulok to Bangkok’s Sanam Luang, to join other members of the public in mourning for His Majesty King Rama IX’s passing.
Before this ride to Bangkok, Sathit had also ridden to the capital to sign his best wishes to the beloved monarch and also attended a “Bike for Dad” bicycle ride campaign to honour King Rama IX.