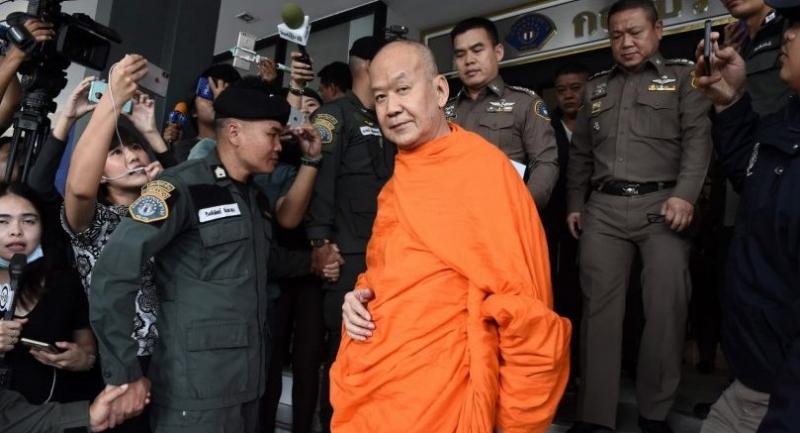 THE CRIMINAL Court for Corruption and Misconduct Cases yesterday rejected bail requests for five former senior monks and their three alleged accomplices in a big corruption scandal.
At the centre of the scandal are the Sa Ket temple’s former abbot, Thongchai Sukayano, who was previously known as Phra Phromsitti, and four former assistant abbots. Also implicated are three civilians, who were found to have suspiciously received funds from the temple.
Public prosecutors submitted their case to court yesterday.
Upon showing up at the court, the eight defendants tried to seek temporary release but their request was turned down on grounds that their alleged crime was well-organised, they had stolen huge amounts from the state budget and had hurt the image of Buddhism.
“Their [alleged] crimes are grave and will carry heavy punishment,” the court said, adding that there were also grounds to believe that the defendants would flee if granted bail.
Before the allegations emerged, Phra Phromsitti was a powerful and much-respected monk in the country. Not only did he lead a Royal temple in Bangkok, but was also chief of the Monastic Region 10, chairman of the Dhammaduta Office and member of the Sangha Supreme Council (SSC).
The accused monks had to give up their saffron robes when they were taken to prison pending investigation into their alleged crimes.
Wat Sa Ket is not the only temple under investigation.
The authorities have started to seriously look into state-provided funds to temples, after a temple in the South reported that a senior official of the National Buddhism Office (NBO) had asked for a kickback.
Yesterday, public prosecutors forwarded a corruption case involving Euan Klinsalee, another former member of the SSC.
Euan used to be widely known as Phra Phromdilok. Before he was hit with corruption charges, Euan was the powerful abbot of Bangkok’s Sam Phraya Temple and monastic chief in the capital. Also implicated in this case was his secretary – now also a former monk. These defendants did not apply for bail release when they were taken to the Criminal Court for Corruption and Misconduct yesterday.
The only former monk granted bail in a corruption case was Somkiat Khanthong – the former abbot of Lad Khae Temple in Phetchabun province. Though he was denied temporary release during the interrogation process, his bail request was granted when his case went to court.
Somkiat, formerly Phra Khri Kitti Patcharakhun, is accused of collaborating with Nopparat Benjawatananun, a former director of the NBO, in embezzling state funds. Nopparat is on the run, like the NBO’s former deputy director Pranom Kongpikul.

Panom Sornsilp
Panom Sornsilp, another former director of the NBO, is in detention over corruption charges. He was nabbed this month.
Damages from alleged temple-fund embezzlements are estimated to be in the hundreds of millions of baht.