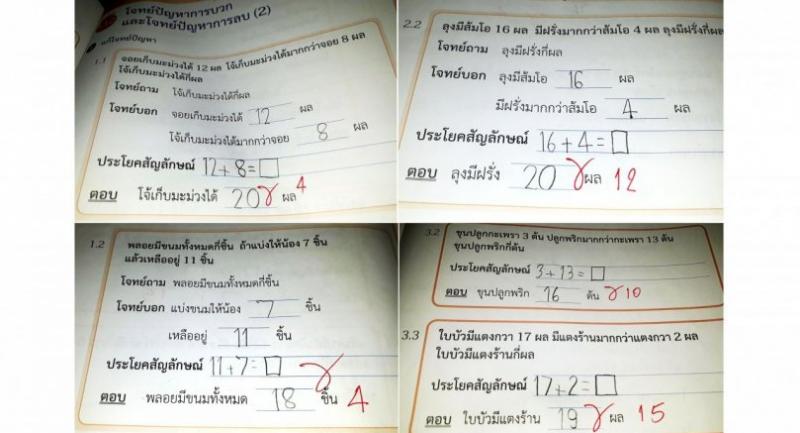 HEATED debates about a teacher’s incorrect marking of a girl’s homework may sound like people are making a mountain of a molehill. Human errors, after all, are not unprecedented.

But these debates, which spread like wildlife on social media, are not at all fruitless. They have at the very least nudged all sides to pay attention to the country’s educational sector.
What has happened to cause teachers to teach erroneous things in class? How will children be affected when they are told their right answers are wrong?
“My daughter was so sad when her teachers told her the answers were all wrong,” said Duangmaee sae Kow, the mother of a Prathom 1 student at Chomchonwatnongtumlung School in Chon Buri province, during a meeting with the school’s headmaster Chamnong Mingcharoen.
On Tuesday, Duangmanee’s younger sister posted on her Facebook account “Phuan Pennapa” a simple question and asked how her niece’s teacher could find fault with such a straightforward answer.

The question was: “If Joy picked 12 mangoes and Joe picked eight mangoes more than she did, how many mangoes did Joe pick?” Conventional wisdom would suggest the answer was “20” but for one maths teacher, the correct calculation was 4.
The Facebook post attached a picture of the homework |showing the niece’s response of 12+8=20, the teacher’s X mark to declare it wrong and by it the “correct” answer of 4.
When the post appeared on Facebook, it generated such a huge response from that “Joy” and “Joe” became the hottest words of the day. Her post has been shared more than 10,000 times.
“Thank you for all comments. I posted this online to hear possible explanations. I think about my niece’s feelings,” explained Phuan. “I don’t want her to lose confidence in studying.”

Many media outlets reported the story and even interviewed academic experts as well as maths champions to double-check the answers.
All experts unanimously agreed: Phuan’s niece gave the right answer.
After attracting such huge media attention, the school invited the student’s parents to a meeting.
Chamnong said the homework marker in question was an assistant teacher and had only recently been assigned to teach Prathom 1 students for the first time.
She rushed to check the homework of more than 30 students one evening and mistook the “plus” sign for a “minus” sign, so 12+ 8 appeared to be 12-8, leading her to declare 4 to be the right answer.
“She will have to admit her mistake so that she will learn to become much more careful in the future and work as a good teacher,” Chamnong said.
According to him, the assistant teacher is so ashamed of her mistake that she dared not come to her class yesterday.
Phuan has resolved to remove her popular post from Facebook to reduce the impact on the assistant teacher.