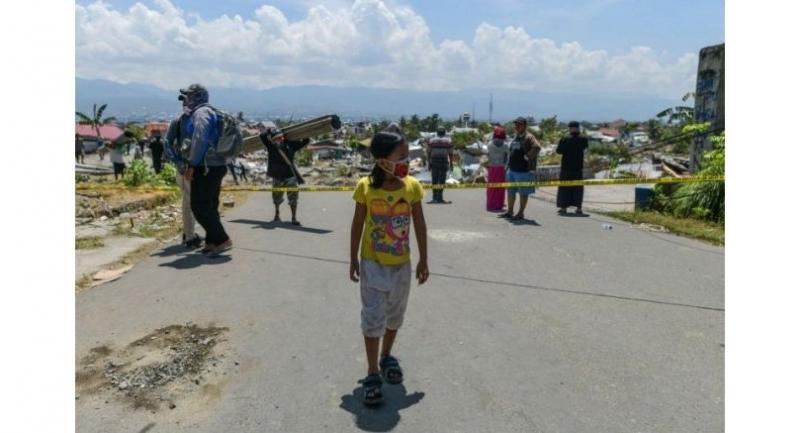 Sulawesi quake: Tens of thousands of children among survivors desperate for aid

Tens of thousands of children are in an "extremely precarious" condition after last Friday's earthquake in eastern Indonesia even as survivors grow desperate for aid and fears mount that the death toll could rise further.

Four days after the 7.4-magnitude earthquake, followed by a 7m-high tsunami, wreaked havoc on Central Sulawesi, it has proved difficult to reach the more than 61,000 people displaced across the disaster-hit areas.

At least 1,234 people are already known to have died in the provincial capital of Palu and neighbouring regencies of Donggala, Sigi and Parigi Moutong, while 152 are trapped under buildings and 99 are still missing, according to official figures from the National Disaster Management Agency (BNPB) on Tuesday (Oct 2).

The toll is likely to rise into the thousands as rescuers reach more areas, and as the telecommunication network and utilities are restored, Dr Sutopo Purwo Nugroho, BNPB’s spokesman, told journalists in a press briefing.

Amid shortages of food, drinking water and medical supplies, reports have surfaced of looting and thefts from abandoned shops and warehouses.

Sounding a warning, the United Nations children agency Unicef said more than 1,000 schools have been damaged, affecting nearly one in five students in the province.

Unicef is appealing for US$5 million (S$6.8 million) to provide health and educational services and has highlighted the dire need for ready-to-eat meals, water and sanitation materials, basic healthcare items, medicines and female hygiene kits.

Efforts also need to be stepped up to identify children separated from their families and give psycho-social support and educational services, it said.

Although the central government has dispatched disaster relief aid, it has not been possible to reach all the survivors of the disaster, The Jakarta Post reported.

The daily quoted Alexander Manggabarani, 32, a resident of Tipo village in Palu, as saying that the 189 survivors in his village had to build their own shelter and look for food and water on their own, since aid had not arrived.

"We have gone to the offices of the governor and mayor and to the Tadulako Military Command but have yet to receive assistance," Mr Alexander told Jakarta Post.

"For the last two days, we have only been eating bananas and looking for spring water; we built makeshift tents."

"We need food supplies and medical assistance, there are many injured victims."

The survivors were also stepping forward on their own to retrieve bodies trapped under soil, he said.

President Joko Widodo on Sunday night gave a nod for foreign assistance to be accepted to facilitate urgent disaster response and relief,  tasking a team led by the Coordinating Ministry for Political, Legal and Security Affairs to handle all matters pertaining to the aid.

On Tuesday, he instructed Coordinating Minister for Political, Legal and Security Affairs Wiranto, to identify Indonesia’s needs and later, convey them to countries willing to help.

In response to mounting demand for evacuation from local residents, Mr Joko advised that they remain calm as the government is trying to restore economic activities there.

“Last night I already ordered National Police Chief and Indonesian Military Commander to guard fuel stations and economic centres so that shops can re-open and the economy is back to normal again, allowing the rehabilitation and reconstruction start,” he told reporters.

Indonesia's State-Owned Enterprise Minister Rini Soemarno has provided assurance that there will be a sufficient supply of fuel for emergency services.

"State-owned oil and gas holding company Pertamina has distributed 4,000 litres of diesel fuel. The fuel comes from Tarakan, North Kalimantan. Pertamina used cargo aircraft to bring the fuel to Palu," she said in the sidelines of her visit to Palu on Monday as quoted by Antara News.

Ms Rini also added that Pertamina has supplied 16,000 litres of fuel to three gas stations that were not destroyed by the quake and subsequent tsunami and will continue to distribute it to overcome fuel shortage.

Indonesia, the world's largest archipelagic nation with more than 17,000 islands, lies on the Pacific's "Ring of Fire", where earthquakes and volcanic eruptions are frequent as a result of movements of tectonic plates.

Prior to last week, Indonesia was last hit by a tsunami in December 2004 following a 9.1-magnitude earthquake off the coast of Sumatra, claiming around 120,000 lives.

Since last Friday's earthquake, as many as 254 aftershocks have been recorded as of Monday. On Tuesday morning, two quakes - of 5.9 and 6.0 magnitude - were recorded in quick succession off the southern coast of Indonesia's Sumba island.