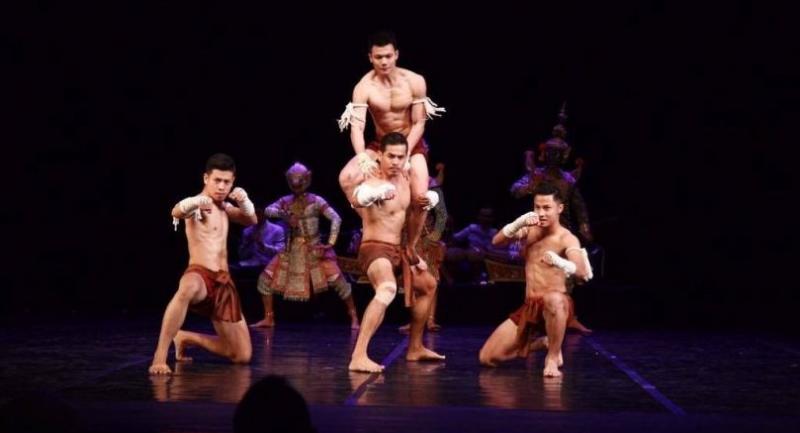 Sharing the same sporty spirit and fascination with martial arts, Thailand and Turkey have decided to kick 60 years of ties up a notch. Marking the long friendship, the two countries launched stamps featuring their national sports – muay thai and Turkish wrestling – in May. Thai kick-boxing is popular among Turks, with the Muay Thai Federation of Turkey boasting more than 100,000 members. So it was no surprise when muay thai topped the bill in the roadshows the Thai Culture Minister towed through Turkey last week.

“Thailand and Turkey established diplomatic ties in 1958 and both countries’ relations have been close and cordial,” noted Culture Minister Vira Rojpojchanarat, speaking alongside his opposite number Mehmet Nuri Ersoy at the opening ceremony inside Ankara’s famed Anatolian Civilisations Museum. “The bilateral ties have been upgraded to the level of strategic partnership since 2015. Besides vibrant relations, Thailand and Turkey also cooperate in a number of multilateral platforms.”

The ministers then unveiled an exhibition by Thai and Turkish photographers, capturing the cultural and natural beauty of their respective lands. “In exchange, Turkey will bring take cultural shows to Thailand in November and December,” said Ersoy. Before that, packed Turkish audiences were spellbound by muay thai performances, Hun Lakhon Lek puppet shows, Khon and avant-garde fashion by designers Prapakas Angsusingha and Ek Thongprasert, as the Thai roadshow rolled into the Cuneyt Gokcer Theatre.

“I really enjoyed the Thai boxing and fashion shows. The puppet show was fascinating too,” said one Turkish spectator, who declined to give her name.

Muay thai also starred in an animation screened for Thai Film Week at the Grand Pera Cinema in Istanbul. Produced by the Culture Ministry, new film “The Legend of Muay Thai: 9 Satra” with Turkish subtitles kicked off the September 28-October 2 festival. Turkish cinemagoers were also treated to six other, featuring both contemporary and traditional Thai culture.

The programme of award-winning films ranged from the remastered classic “Santi-Vina” to contemporary blockbusters “The Legend of Muay Thai: 9 Satra” and “Bad Genius”, giving Turkish cinemagoers a taste of drama spanning traditional to contemporary Thailand.

New animation “The Legend of Muay Thai: 9 Satra” is produced by the Culture Ministry

“Thailand has always been an exotic location for foreign films, owing much to her popularity as a world-renowned tourist destination,” said Thai ambassador to Turkey Phantipha Iamsudha Ekarohit, unveiling the film week. “There are the crystal-clear seawaters in the South, seen in famous movies like ‘The Man With the Golden Gun’, or the white-powder sandy beaches seen in the movie ‘The Beach’. Or the lush forests in the North, and the cosmopolitan setting of Bangkok.

“The Thai movie industry is also very active and lively,” noted Phantipha. “In 2017, there were 52 Thai productions shown in local cinemas, highlighted by top earner and international hit ‘Bad Genius’. “Thai people, like the Turks, love watching movies, and going to the cinema is an experience that whole families share and cherish together. Movies offer not only entertainment but can also be a window into another culture, where we can learn about other ways of life, languages, thinking and environments from the comfort of our seats.

“And as we learn and understand each other better, we can foster and build constructive and long-lasting ties of friendship.” Vira added nearly 31,000 Thais visited Turkey in 2017, while up to 75,000 Turkish tourists arrived in Thailand during the same period. “There should be a big increase of tourists from both sides after the Thai-Turkish Cultural Year 2018. With this ‘soft power’, we aim to forge a more creative economy by promoting food, fashion, festival, fight and film. We hope to extend our investment [in Turkey] too,” said Vira.

“In 2017, the bilateral trade volume was around US$1.517 billion. Currently Thailand and Turkey are in the process of negotiating a Free Trade Agreement that will promote and increase trade and investment between two countries significantly,” Phantipha said. Thais have much to look forward to when Turkish artists arrive in November to return the favour. “Truly, we are excited about Turkish performers coming to share their arts and culture with people in Thailand,” Vira concluded.