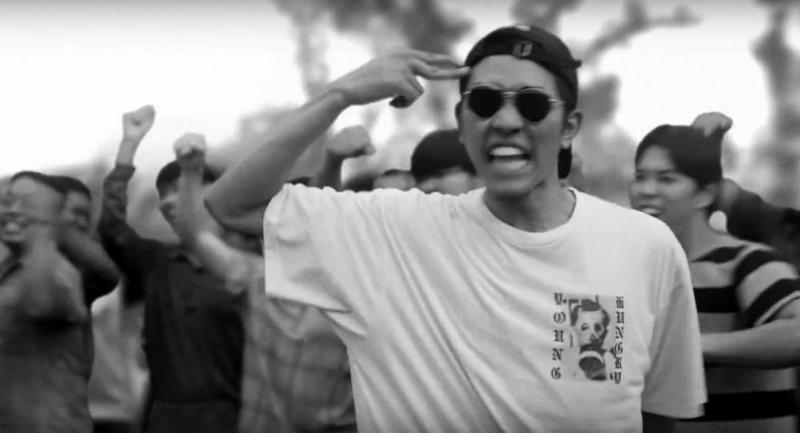 A Rap on the knuckles for junta

Video draws a million hits, but the 10 indie rappers may have to face charges.

EVEN THOUGH the hottest rap single, “Prathet Ku Mee...” (My Country’s Got...), hit No 2 in the YouTube Thailand chart on Wednesday, the popular anti-junta refrain might still land the Rap against Dictatorship group in trouble, the nation’s top cop warned on Friday.
The music video, featuring rappers having a go at the ruling junta, had been watched close to a million times on Facebook and YouTube as of Wednesday – less than 24 hours since its release.
The clip was watched 1.7 million times as of press time on Friday, prompting authorities to warn the artists that they may be summoned for “attitude adjustment” and face the charge of putting false information into cyberspace, as per the Computer Crimes Act.

The single was initially released on October 14, marking the 45th anniversary of the October 1973 uprising, but it only became popular this week when the music video was released, featuring 10 well-known underground rappers who adopted different aliases to maintain their anonymity.
The idea for the track took form more than six months ago, with graffiti artist Alex Face creating the album cover depicting a cartoon-like creature in the pose of August Rodin’s “Thinker” inside the “Gate of Hell”, also by Rodin.
Created by four directors, the music video depicts the historic October 6, 1976 image of a corpse hanging from a tree in Sanam Luang. The performers, wearing masks, hit the corpse in time to their beat and are watched by a crowd of young people.

This is not the first time that Thai artists have been inspired by a bloody event. Well-known photography artist Manit Stowanichapoom and young conceptual artist Nutdanai Jitbunjong also used this historic image in their work.

However, this song is clearly a rare voice of dissent from mainstream performers, who feel they cannot criticise the military junta directly.
Yet, they have chosen rap – which can only ever have straightforward lyrics – and there appears to be no reticence in the five-minute performance, in which the 10 rappers take turns denouncing what they see as wrong with Thailand.
The song speaks about the hypocrisy of military dictatorship, the deep political divide, deaths on both sides of the divide and the failure of self-righteousness.
“As artists we want to reflect the truth of the society we are living in under dictatorship. Thailand seems to be caught in a loop of dictatorship. We want to voice what the majority cannot say directly. The lyrics were based on information we collected on social media, reflecting the sickness of our society,” one rapper told The Nation Weekend, adding that his team had spent almost a year working on the tune and music video.

The lyrics are:
“My country preaches morals, but has a crime rate higher than the Eiffel
My country’s Parliament is a soldiers’ playground
My country points a gun at your throat
Claims to have freedom but gives no right to choose
My country’s government is untouchable
The police use laws to threaten people
My country asks you to stay quiet or in jail.”
Pro-democracy politicians, |like the young rising star Thanathorn Juangroongruangkit, who leads the Future Forward Party, and Pheu Thai’s Chaturon Chaisaeng publicly applauded the rappers’ bravery. However, top cops were certainly not fans.

Deputy National Police chief Srivara Ransibrahmanakul said on Friday that the Rap against Dictatorship group may have broken the law by releasing this single, and that the Police Technology Crime Suppression Division would study the lyrics to see if they violated any junta orders.
The rappers will also be summoned to testify if they intended to cause any chaos or violate any orders from the ruling National Council for Peace and Order, he added.
“I want to warn musicians to not do anything that risks violating the country’s laws, as it will not be good for them or their families if the songs are found to be violating the law,” Srivara warned. However, the artists said they were just exercising their freedom of expression.
“It’s normal in a democratic society for artists to reflect the truth in their society through art. It’s the artists’ role to share their thoughts through their creations,” assistant professor Pandit Chanrochanakit, deputy dean at Chulalongkorn University’s Faculty of Political Science, told The Nation Weekend. “I think these rappers reflect what we are facing in Thailand. I think the police should heed the lyrics and listen to the voice of the public, so the country’s problems can be solved.”