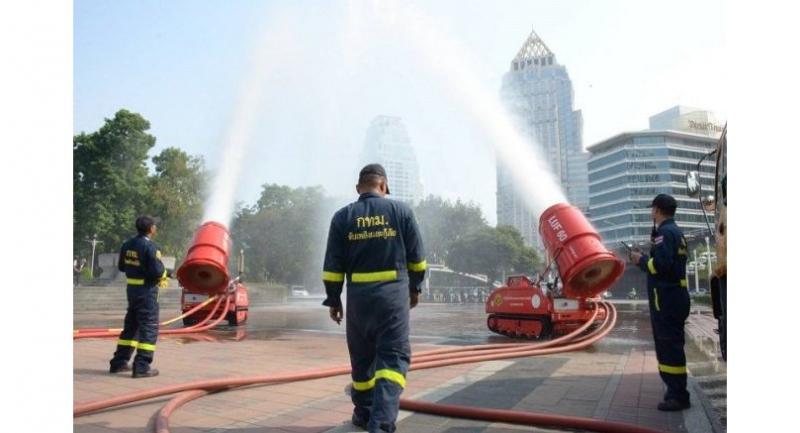 RESIDENTS OF Bangkok and vicinity continued to inhale unhealthy levels of air pollution yesterday, the fourth consecutive day the area was shrouded in a smog of airborne particulates.

Particulates measuring 2.5 microns (PM2.5) or less were recorded in at least 20 roadside locales beyond the safety limit of 50 micrograms per cubic metre. Sixteen other places also have levels dangerous to health. The worst-affected area – assigned a “red code” – on Sunday morning was Tambon Pak Nam in Muang Samut Prakan, with a reading of 93 micrograms per cubic metres.
Rama II Road in Samut Sakhon earned an orange code with 90 micrograms, while the readings were 73 along Bangkok’s Soi Lat Phrao, 95 in Wang Thong Lang district and 72 on Paholyothin Road in Chatuchak.
In a bid to lessen the smog, city workers on Sunday sprayed water along the roads in Lumpini Park. To increase humidity, Bangkok Governor Pol General Aswin Kwanmuang ordered the use of high-pressure hoses that can shoot water 30 metres into the air, the first time they’ve been used. BMA deputy permanent secretary Wiparat Chaiyanukit was at the park cheering on the mission.
Absence of wind added to the high accumulation of dust particles, according to the Pollution Control Department (PCD). It warned that the air quality was unlikely to improve on Monday and urged people to stay indoors or wear an N95-rated facemask if they go out. Cars and trucks that belch black exhaust smoke should not be operated, and outdoor fires are discouraged.
The Bangkok Metropolitan Administration has ordered strict controls on outdoor burning and has officials advising crematorium operators about proper practices. PCD director-general Pralong Damrongthai said the PM2.5 level was unsafe in Phayathai, Din Daeng, Lat Phrao, Min Buri, Bang Khun Thien and Rama II Road. Residents there should take protective measures because the particulates – one-tenth the size of a human hair – enter the lungs and irritate the respiratory system, he said.
Anyone already in poor health would be more easily affected by PM2.5, Pralong noted. The particulates come mainly from diesel engines and the worn combustion systems of older vehicles, from burn-offs of cropland and from factories.
The PCD is working with the city, traffic police, the Department of Land Transport, Ministry of Transport and Agriculture and Cooperatives Ministry.
Traffic police are tagging vehicles issuing black exhaust with a sticker and ordering them off the road, Pralong said. The authorities could also bar large vehicles from inner Bangkok if the air pollution remains bad much longer, he said.