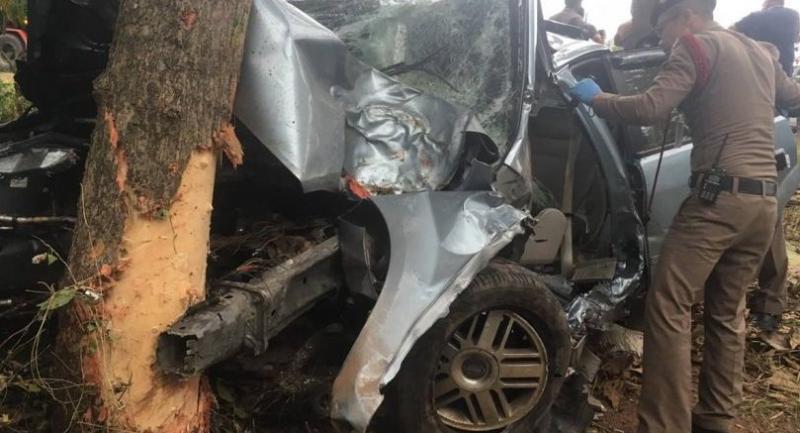 A total of 236 people were killed and 2,265 others injured in 2,194 road accidents over the first four days of the New Year holiday period’s “seven dangerous days”, the Disaster Prevention and Mitigation Department’s Road Safety Centre (Thai RSC) reported on Monday.

Probation Department chief Prasarn Mahaleetrakul told the press conference that there were 561 road accidents on December 30 alone killing 51 people and wounding 578 others. Songkhla had the day’s most crashes at 23 cases and most injuries at 24 persons, while Nakhon Ratchasima reported the day’s highest fatalities with five deaths.

The major causes of accidents were drunk driving at 42.42 per cent, followed by speeding at 27.99 per cent.

Of the accidents, 80.31 per cent involved motorcycles followed by pick-up trucks at 6.39 per cent.

Most of the accidents occurred between 4pm and 8pm (29 per cent).

Prasarn said 2,051 checkpoints, manned by 66,742 officials nationwide, recorded 177,400 violations on December 30. A total of 43,799 motorists failed to produce a licence, while 51,039 motorcyclists were stopped for riding without helmets, he said.

In his capacity as Probation Department chief, Prasarn earlier reported that Thai courts had put 3,525 traffic law violators on probation from December 27 and 30. Of these, 3,049 cases involved drunk drivers, 437 cases related to driving under the influence of a narcotic substance, 37 were cases of reckless driving, and two were related to speeding. On December 30 alone, there were 207 cases of drunk driving and all of the violators were placed on probation, he added.

Bangkok had the highest cumulative drunk driving cases at 295 cases followed by Maha Sarakham at 224 cases and Sakhon Nakhon at 207 cases. So far only 33 drunk drivers – 26 in Bangkok, four in Khon Kaen and three in Buri Ram – have been ordered to wear Electronic Monitoring (EM) devices from January 1 onwards. They are also banned from going out between 10pm and 4am for 15 days, must undertake 24 hours of social services, and will have their licences suspended for six months, he added.

National Council for Peace and Order deputy spokeswoman Colonel Sirichan Nga-thong, meanwhile, reported that a total of 2,729 vehicles (1,945 motorcycles and 784 automobiles) and 4,326 driver’s licences had been seized from drunk drivers in the first four days of the period.