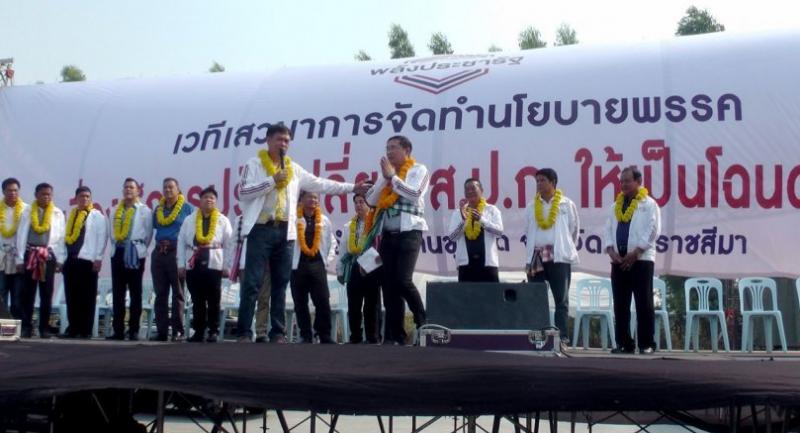 PRIVATISATION OF agricultural public lands held under the Agricultural Land Reform Office (ALRO) is being advanced as an election promise by Phalang Pracharat party, despite objections from the Prime Minister and land rights activists.

Boonchong Wongtrasirat, an MP candidate for the pro-junta Phalang Pracharat Party revealed yesterday that his party intended to overhaul the approach taken with lands under the ALRO. While the land currently could not be sold or change hands, the party would allow land deeds and the transfer of ownership in an effort to tackle what it sees as a “land-use problem”.
“The party’s promise to turn ALRO land into land deeds is coming from a genuine demand by the public, as many people who live on ALRO land have already shifted away from being a farmer and so changed the land use, but they cannot change or transfer land ownership to increase the value of the land,” Boonchong said.
“As we heard this problem from the people, we insist on pushing forward on ALRO land reform as one of the party’s core policies in this election.”
If the party is elected in the upcoming poll, the Phalang Pracharat Party will keep this promise and implement ALRO land reform, he pledged.

ALRO land is administrated by the organisation with the intent of providing land for farming to landless farmers. The rights to live and farm on the land can be passed down within the family as an inheritance from generation to generation. However, selling or transferring ownership of ALRO land is now prohibited and illegal.
Suchart Tancharoen, another prominent member of Phalang Pracharat Party, gave assurances that the privatisation would not lead to ALRO land falling into the hands of capitalists. Under the party’s ALRO Reform Policy, the true ownership of the land would remain with ALRO with only the name of the entitled land user changed.
The use of ALRO land under the party’s policy would not be restricted only to farming. Permitted activities could be changed to reflect suitable land-use capability, said Suchart.
Eligibility for use of ALRO land should not be restricted to poor people, he insisted. As the users increase their income, they should be allowed to maintain their ownership, he said.
Phalang Pracharat Party is not alone in having an election plank focused on ALRO land use. The Democrat Party has a policy to allow ALRO inhabitants use the land as “property” for the purpose of mortgages and bail guarantees.
However, Prime Minister Prayut Chan-o-cha has cautioned political parties to avoid making promises on the ALRO lands that they could not keep. The lands are the country’s inheritance and reserved for only the landless to farm, he said.
“We need to preserve these land for future generations, because if these ALRO lands slip away from the farmers’ hands, they will have no other land to farm and the country will lose our food production areas,” General Prayut said.
Pornpana Kuaycharoen from Land Watch Thai said party policies to privatise ALRO lands are a political stunt intended to win voter support in the upcoming election.
If such a policy were actually implemented, Pornpana warned, it would cause disastrous results for the country, as it would not only directly undermine the core intention of ALRO to distribute land to landless farmers, but would also intensify the already severe problem of land ownership disparity in Thai society.