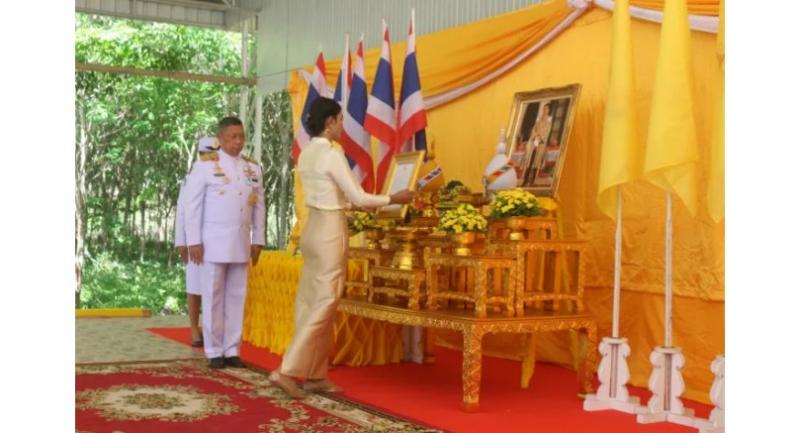 His Majesty the King sent a letter praising a Trang woman, who is known among locals as "Temple Dog Angel" for cleaning stray dogs in the southern province's temples for years.

The King graciously instructed Maj Gen Kalsawan Chantharasen, an officer attached to the King's royal villa, to hand over his letter to Napassawan Chukaew, 39, a resident of Trang's Yan Ta Khao district.
A ceremony was held at 10am on Friday at the Thun Koh Yuan School in Tambon Nong Bor for Napassawan to receive the letter in a photo frame in front of the King's portrait.
In the letter, His Majesty commended the woman for her consistency in doing good by cleaning temple dogs without being disgusted by them.
The King said the actions showed that that Napassawan is a kind-hearted person and also commended her for regularly cleaning toilets in temples in the district.
Napassawan is married with two children. She is known among local people for always making merits at temples and often donating clothes to underprivileged people as well as donating blood every three months.
After the ceremony to receive the King's letter of praise, Napassawan said she would continue her activities. She said she and her family were overjoyed to receive the letter of praise from the King.
She said she felt happy to help relieve the burden of monks' by buying pet shampoo to shower dogs in temples in the district.
Her mother, Chaluay Chukaew, said the family and Trang people felt it was a great honour that the King sent praise to the local woman.