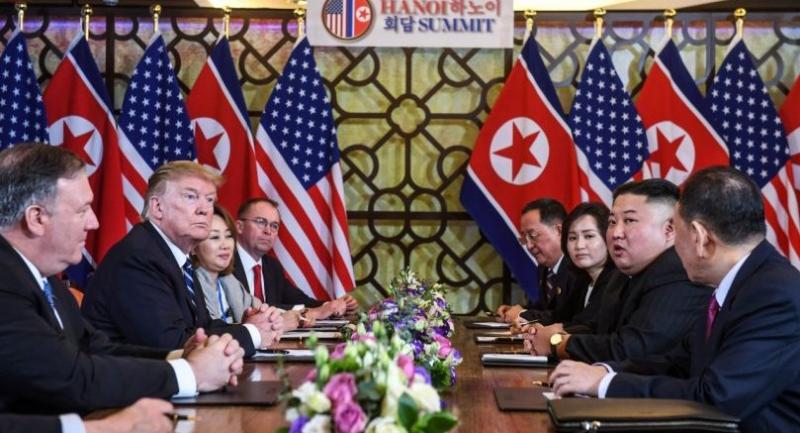 North Korean leader Kim Jong Un said Thursday that he would not be at the Hanoi summit with US President Donald Trump if he were not willing to denuclearise.

"If I was not, I wouldn't be here," he told a reporter who asked whether he was ready to do so. Trump responded that the comment "might be the best answer you've ever heard".

The two sides have differed over the definition of the term, and when Kim was asked if he was willing to take concrete steps, the North Korean leader answered: "That's what we are discussing right now."
The North Korean leader also said he would welcome Washington opening a liaison office in Pyongyang
Liaison offices are below the level of embassies but would be a key initial step in normalising relations between the former wartime foes.

Asked if he was ready for the US to open an office in Pyongyang, Kim told reporters: "I think it is something that is worth welcoming."

Taking questions from a small group of reporters, the leaders sat across from each other, along with close aides and interpreters. Trump said the idea of a liaison office was a "great thing".

Kim promised to "do my best to achieve a great, ultimately good outcome" as he sat down for formal talks Thursday with US President Donald Trump.

They had "walked side by side to Hanoi", where the summit was taking place, and were "continuing great dialogue", he added

The leaders are in Hanoi for their second summit following a historic first meeting in Singapore last June that produced little more than a vaguely worded agreement to "work toward complete nuclearisation of the Korean peninsula.

They face pressure to agree on concrete steps on what exactly that means and how it could be achieved.

But the US leader said Thursday he was in "no rush", appearing to back away from any expectations the much-anticipated meeting could produce any major breakthroughs.

The pair are expected to sign a declaration after their meetings, and Trump will hold a press conference before leaving Vietnam later Thursday.