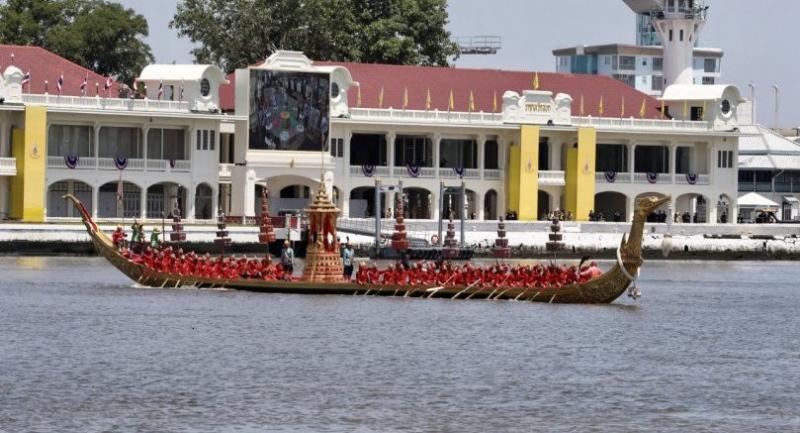 THOUGH THE GRANDEUR of the three-day Royal Coronation ceremony was replaced by normal humdrum life in Bangkok come Tuesday morning, people won’t have to wait too long for another grand event – the royal barge procession. Also part of His Majesty King Maha Vajiralongkorn’s coronation ceremonies, the magnificent procession will be held in late October.

The pageant will feature 52 royal barges with about 2,000 oarsmen, with the exquisitely crafted Subhannahong carrying His Majesty from the Wasukri pier to Wat Arun (Temple of Dawn). Upon arrival, the King will present robes to monks as part of the Royal kathin ceremony marking the end of Buddhist Lent.
During the three-day coronation ceremony, the century-old Subhannahong barge was docked at the Ratcha Woradit pier next to the Grand Palace. The royal vessel had been restored to its former majestic glory by the Royal Thai Navy and the Fine Arts Department’s Office of Traditional Arts.
Traditional practices during the Royal Coronation ceremony dictate that different modes of transportation, namely a palanquin, a white elephant, a horse, a motorcar and a barge, stand ready at each station in honour of the newly crowned monarch.

The Subhannahong royal barge was moored at Ratcha Woradit pier throughout the threeday coronation ceremony from May 4 to 6. She will be the supreme barge carrying the King during the royal procession in October.

Customarily, the post-coronation ceremony includes a royal procession by land and by water to temples, during which the King symbolically becomes the patron of Buddhism. This also gives the public a chance to pay homage to their new monarch.
All previous Kings of the Chakri Dynasty performed the royal land procession, with the exception of King Ananda Mahidol (Rama VIII), who passed away before being formally crowned, and King Bhumibol Adulyadej (Rama IX), who chose not to perform this ritual after he was crowned on May 5, 1950. King Bhumibol chose to hold the procession in 1963, marking the occasion of his third-cycle birthday anniversary.
Hence, the post-coronation land procession of the current monarch on Sunday was the first in 94 years after that of King King Prajadhipok (Rama VII) in 1925.

The elaborate parade, with 1,286 participants, saw the King being carried on a royal palanquin down the seven-kilometre route from the Grand Palace to Wat Bovoranives, Wat Rajabopidh and Wat Phra Chetuphon and took almost seven hours to complete.
The post-coronation royal barge procession has only been held four times since the dawn of the Chakri Dynasty. King Rama I performed this ritual during his second coronation in 1785. Then the barges underwent extensive restoration work and were completed in time for the coronation ceremony of King Rama IV in 1851, followed by the coronations of King Rama VI in 1911 and King Rama VII in 1925.
In 1982, King Bhumibol ordered a grand barge procession to mark the bicentennial of the Rattanakosin era. During the late King’s 70-year reign, the pageant was held 17 times marking the Royal kathin ceremonies.

Artisans install the busabok in the middle of the Subhannahong royal barge that will serve the King during the royal procession to Wat Arun in October.

In preparation for the royal barge procession in October, the Royal Thai Navy has been working for a full year, refurbishing these exquisite boats that are kept in dry dock at the Royal Barge Museum on the Thon Buri side of the river. They are thoroughly cleaned and X-ray technology is used to inspect the condition of the vessels’ structures for effective restoration.
Artisans of the Fine Arts Department are in charge of restoring the decorative parts, applying new gold lacquer and inlaid glass, and generally getting the vessels ready in line with royal splendour.

Royal splendour
The King’s barge – the Subhannahong – was first built in during the reign of King Rama V, but only completed during the reign of King Rama VI – in time to mark his second coronation in 1911.
Made from teak, the 46-metre Subhannahong royal barge has the head of a mythical swan and is adorned with gilded lacquer and mirrored glass, a crystalline ball and tassels made from yak hair dangling from the mouth. The hull is painted black outside and red inside.

The busabok (spired pavilion) is placed in the centre, with a throne for the King and seats for the Royal Family. It is enshrined with royal regalia including the seven and five-tired chatra (umbrellas) as well as the royal umbrella and fan. The World Ship Trust gave the Subhannahong a Maritime World Heritage status in 1992.
The vessel is manned by 50 oarsmen, two steersmen, two officers fore and aft, a signalman, a royal flag bearer, one chanter and seven chatra bearers. The chanter leads the singing of the song that has been especially composed for this year’s ceremony and the oarsmen chant rhythmically in unison on each barge.

The royal barge procession of King Rama VI proceeded from the Grand Palace to Wat Arun in 1911.

After founding the Chakri Dynasty and making Bangkok the capital of Siam in 1782, King Rama I re-examined the coronation records from the late Ayutthaya period, resulting in a revised procedure and prototype for the rites of accession, including the royal barge procession.
King Rama I ordered the construction of a series of barges and named the most important of these Si Subhannahong. King Rama V later initiated the building of a new and similar barge to replace the original dilapidated vessel, and also named it the Subhannahong – this vessel has remained in use ever since.

King Rama VII embarked for the royal barge procession to Wat Arun in 1925.

However, barges kept in the Navy dock in Bangkok Noi district suffered extensive damage during World War II, with only three royal barges – the Subhannahong, the Anantanakkharaj and the Anekkachatpuchong – surviving alongside 11 other vessels.
The major renovation of these barges was carried out during the reign of King Bhumibol and the dock that used to store them became the current Royal Barge Museum. A new royal barge named Narai Songsuban HM Rama IX was constructed to mark King Bhumibol’s Golden Jubilee in 1996. The prow is carved from wood and the figurehead depicts the god Vishnu riding the Garuda.
In October, people will have the chance to see a splendid procession of 52 vessels along Chao Phraya River.
The barges will be divided into different classes, with the four majestic royal barges – Subhannahong, Narai Songsuban HM Rama IX, Anantanakkharaj and Anekkachatpuchong – being stars of the event. The procession will also feature eight animal-masthead barges, 22 lesser escort barges and 18 other vessels.