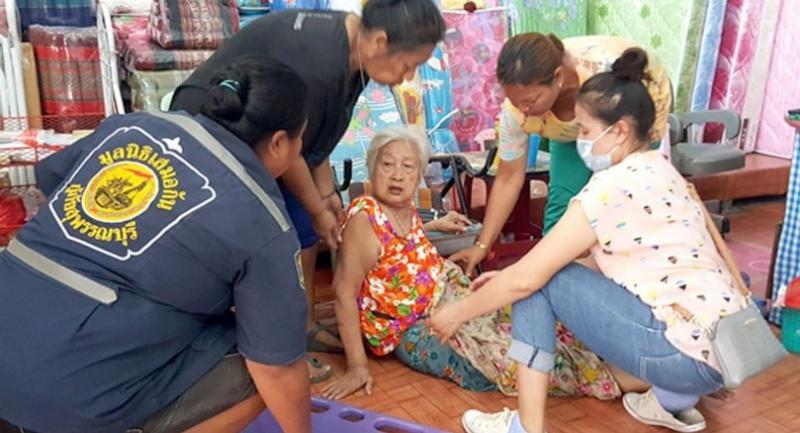 AN ANNUAL average of more than 140,000 seniors sought emergency treatment for injuries from falls over the past three years, a senior official said yesterday.

Dr Atchariya Pangma, secretary-general of the National Institute for Emergency Medicine (NIEM), urged seniors to eat a healthy diet and exercise regularly to achieve better muscle strength and balance. He also said that families should ensure a safe environment at home.
Thailand is edging closer to becoming a full-fledged ageing society in 2021, when the number of seniors will rise to 13.1 million or 20 per cent of the population.
From 2016 to 2018, an average of 141,895 elderly persons per year sustained injuries from falls and sought emergency medical treatment, he said.
This year, 24,364 seniors have sought emergency treatment for fall-related injuries, with Khon Kaen, Nakhon Ratchasima, Chiang Mai, Ubon Ratchathani and Roi Et provinces having the highest number of patients.
Of the roughly 140 cases requiring emergency treatment per day, at least two people die each day from complications, such as the shattering of the hip or head trauma, Atchariya added.
The highest number of people seeking emergency treatment were in the 60 to 64 age group, followed by 65-69 and 70-74.
Most of the victims who sustained injuries from falls in the 60s age group were male, while most of the patients in their 70s were women.
Deteriorating physical conditions, such as poor eyesight, lack of body balance and weak muscles contribute to the risk of falling, as do environmental factors such as slippery or uneven floors and insufficient lighting, Atchariya said.
Hence, he said, senior should have a healthy diet and take regular exercise for better muscle strength and balance in order to prevent falling.
He also said that the home environment also has to be improved, adding that ideally seniors should live in a one-storey home or on the ground floor if the home has two floors.
The home should also have handrails, be sufficiently lit, a level floor with a non-slippery surface. He also said that toilets in the house should have a sliding door, a western toilet, a 40cm-high seat for the elderly person to sit on when showering, while the bed should be knee-high and located near a toilet.