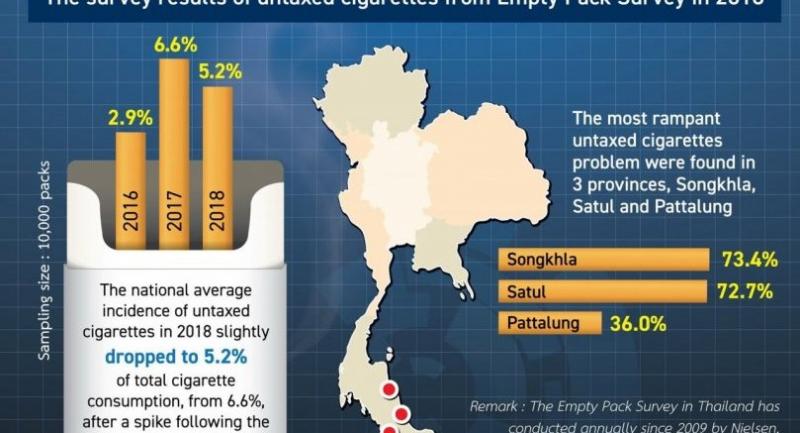 Only 5.2 per cent of 10,000 discarded packs of cigarettes were found to be untaxed, a survey by Philip Morrisan, the American-based multinational cigarette and tobacco manufacturing company, has found.

The company said in a press release on Wednesday the results were part of its latest Thailand ‘Empty Pack Survey’ which was conducted to determine the proportion of untaxed cigarettes from 10,000 discarded empty packs randomly collected from the streets and public garbage places in 36 provinces around the country during the last quarter of 2018.
The number found was a decrease from 6.6 per cent on the same period of 2017 due to an increase in cigarette prices following a reform of the excise tax structure.
Philip Morris has praised the public sector and agencies concerned for jointly taking pro-active measures to crack down on illicit trade which resulted in the concrete result.
Pongsathorn Ansusinha, External Affairs Director, Philip Morris Trading (Thailand) Co Ltd, said: “It is an achievement by the Thai excise, customs, military, police and other law enforcement authorities, who stepped up the crackdown efforts resulting the decrease in the proportion of untaxed cigarettes nationwide.
“It is estimated that the efforts helped to reduce losses in excise revenues by more than Bt2 billion. But the situation is note in three provinces where the most illicit cigarettes are found, namely Songkla where the proportion of illicit cigarettes account for as high as 73.4 per cent followed by Satun with 72.7 per cent and Pattalung with 36 per cent.”
Pongsathorn added: “70 per cent of untaxed cigarettes found in the survey do not have labels that show they are produced to sell in which country or at duty-free shops. So their origin cannot be determined. However, most of the untaxed packs are of the brands well known in the deep south of Thailand.
“Based on our conversation with small retailers in the areas who sell legal products, the conclusion we reached is in line with the results of the survey. In our opinion, if a taskforce is set up to seriously crack down illicit cigarettes like in Australia, we should be able to improve the situation.”
Expressing his concern about an increase in the sale of Heat-Not-Burn tobacco products of Philip Morris International (PMI) through online channels and websites, Pongsathorn said: “PMI’s Heat-Not-Burn products are sold legally in 47 countries around the world for adult smokers who may want to continue their smoking habit. The products could be categorised in the same group as e-cigarettes whose imports have been banned by Thailand since 2014. But due to increasing consumer demand, PMI has closely monitored online channels and websites which illegally sell the products to Thai consumers. In cases where there is an online infringement on intellectual property (such as unauthorised use of PMI’s trademark), a request for takedown are raised immediately with the platform owner.”