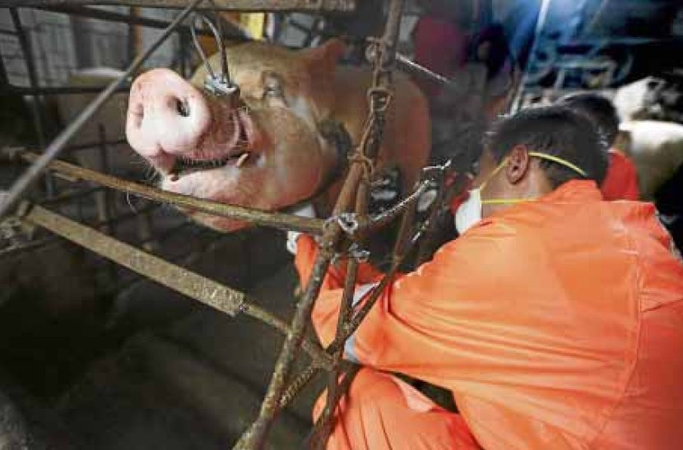 80% of global swine fever deaths are in PH

African swine fever has spread to Metro Manila from adjoining Rizal and Bulacan, provinces that the government earlier acknowledged as among the areas hit by the disease that is fatal to hogs but harmless to humans.

The Quezon City government has culled 146 pigs at Barangay Bagong Silangan since Sunday after 11 hogs in the area tested positive for the African swine fever virus, Mayor Joy Belmonte said on Wednesday.

The culling of the animals came as the World Organization for Animal Health, or OIE, reported that about 8,000 hogs had died in the Philippines from Aug. 30 to Sept. 12.

This figure accounted for the bulk of the 8,200 hogs lost in all of Asia and the 10,000 lost worldwide during the two-week period, said OIE in its latest fortnightly update on the global monitoring of the disease.

In yet another measure taken by a local government, Mati City in Davao Oriental has banned the entry of fresh and processed pork unless these are transported via refrigerated delivery trucks.

Mati adopted the measure despite the appeal on Monday of Agriculture Secretary William Dar to local governments to await guidelines from his department on how to deal with the disease and not unduly impose bans on the entry of pork and pork products in their respective localities.

In a statement, Quezon City Mayor Belmonte said affected backyard raisers would be paid P3,000 and P1,500 for every slaughtered pig and piglet, respectively, as compensation even if the animals were from illegally operated pens.

The city has said that as part of standard protocol, all pigs within a 1-kilometer radius of infected areas need to be culled to stop the highly contagious disease from spreading to animals in nearby areas.

Sitio Veterans (Area 5) and Oriole Extension (Area 2) in Bagong Silangan have been identified as ground zero for the outbreak.

Anamarie Cabel, head of the Quezon City Veterinary Office, said additional blood samples from the 1-km radius of the two areas also had been sent to the Bureau of Animal Industry for testing.

Officials of the Quezon City Police District and barangays have been instructed to contain the spread of the disease, with the former being tasked with establishing and monitoring multiple checkpoints within the area.

Barangay officials have been ordered to crack down on other informal backyard hog raisers and assist the veterinary office by acquiring blood samples for testing.

In a bulletin, OIE is calling on governments to enhance sanitary measures on the disposal of food waste that crosses national boundaries by air or by sea.

It has also urged hog raisers not to feed the animals with untreated swill to help international efforts to deal with  outbreaks.

In the Philippines, two-thirds of hogs are raised by backyard operators.

Pigs raised by backyard farmers are commonly fed with food waste—a source of cheap feed that usually comes from household kitchens, hotels, restaurants and even air and sea ports.

The Bureau of Animal Industry and the Department of Agriculture have urged hog raisers to “not serve swill” as this may be contaminated with microorganisms and viruses that could cause the death of pigs.

Rosendo So, president of the industry umbrella group Sinag, noted that feeding hogs with swill was a cultural given, especially among backyard raisers.

“We are explaining to backyard raisers that in these times when we don’t know where the food scraps came from—maybe from hotels and restaurants that serve dishes with imported pork—using swill feed may ruin their business,” So told the Inquirer.

“Even in the carinderias, we can’t be sure that establishments use frozen imported meat—smuggled—that are readily available and come in boxes indicating their country of origin,” he added.

Swill feeding has been banned in the European Union since an outbreak of food-and-mouth disease in 2001, which was traced to cases of swill feeding in the United Kingdom.

Even then, there are calls to rethink a total ban on swill, with the emphasis on “untreated” swill.

Alternatives put forward in the European Union—to make swill feed acceptable—include the Japanese method of treating swill through, for example, a combination of heat treatment and acidification—fermentation or adding lactic acid.

Mati veterinarian Marites Erispe said the city would no longer allow the entry of meat products by bus, vans and other vehicles except for refrigerated meat delivery trucks.

“All those [meat products] which fail [to meet] the strict screening [standard] would be confiscated,” Erispe said.