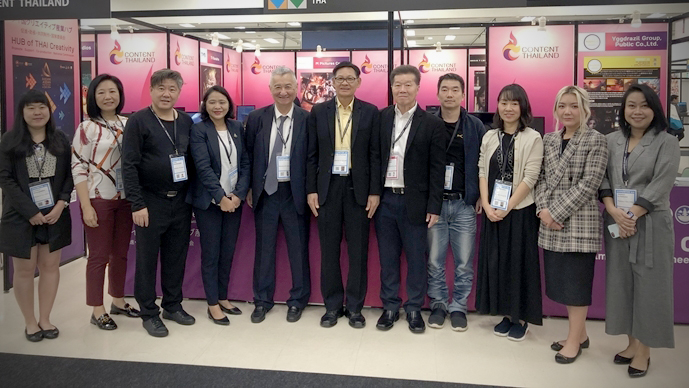 Thailand’s Culture Ministry and the Department of Tourism and Sport recently joined the Japan Content Showcase of the Marketplace for Film and TV in Asia – TIFFCOM 2019 – with the aim of promoting the broadcast of Thai movies and videos internationally, in line with the government policy to use the film and video industry as a tool to develop the country’s competitive ranking and strengthen its position on the global stage.

The ministry’s inspector-general, Somkiet Pantham revealed that the ministry encouraged movie and video entrepreneurs to participate and sell their products at TIFFCOM and was successful in attracting six companies to this year’s event, namely the BNK48 Office, Hollywood (Thailand), M Pictures, the Monk Studios, YGGDrazil Group, and TV Burabha.
“This participation not only promotes the relationship between Thailand and Japan, but also strengthens the film industry in both countries,” Somkiet said. “This helps Thai entrepreneurs to be part of the global market, see the potential of other countries and learn from them. The film and video industry will therefore improve, increasing Thailand’s revenue in the future”.
“The trend of film and video industry changes and develops all the time; however, this industry of Thailand tends to grow every year” he added.
Songpol Wongkondee, the representative of M Pictures, expressed the view that the government should give financial support as well as assist in market promotion help the Thai film industry grow and flourish in the era of streaming,
TIFFCOM 2018 led to negotiations between Thai entrepreneurs and those from other Asian countries valued at Bt150 million, reflecting the interest in Thai content in this region.