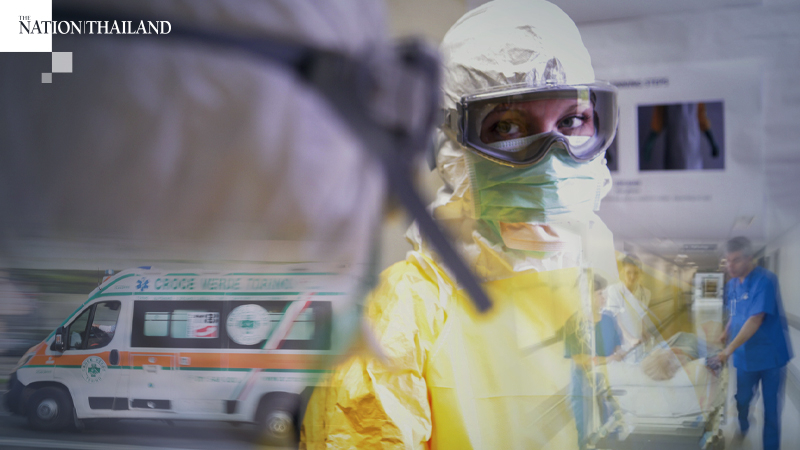 BAGHDAD - On the front lines, Iraq's doctors are contracting the coronavirus by the hundreds, as a rising wave of infections threatens to crush the country's health-care system.

Medical staff who develop symptoms are tested and then ordered back to work, waiting a week for results, fearful that their continued presence is endangering colleagues and patients, hospital staff say. In laboratories that run coronavirus tests, staff are also falling ill.

"Our hospitals are meant to treat people. Instead, they're breeding the infection," said Abdulameer Mohsin Hussein, president of the Iraqi Medical Association, an independent body.

The total number of doctors with reported infections has jumped 83% since the middle of last week, raising the tally to 592 since the outbreak began in Iraq in March, according to the association. It estimates that the number of infected paramedics is even higher.

Iraq's Health Ministry said Friday it had recorded a total of 27,352 cases, with 925 deaths.

Most of the stricken doctors live in the capital, Baghdad. Most have returned to work after being tested but before getting results. Facebook pages advocating for Iraq's medical community show scores of them.

"These doctors shared lounges. They shared rooms for sleeping. In the coming weeks, we'll see the impact of that," Hussein said.

A doctor named Yasser said that he was one of the first medical professionals in Iraq to contract the coronavirus. He quickly got tested and took time off from work at a hospital in Sadr City, a suburb of Baghdad, to fight the disease, his body convulsing as he struggled for breath.

"But now it's all wrong," he said. "My doctor friends who get it now wait 10 days for test results, even though they know they have it. The management doesn't care about our safety, they just care that the staff is working." He spoke on the condition that his family name not be used because he fears reprisal from hospital authorities.

Iraq's Health Ministry has yet to publicly disclose the number of medical staff who have fallen ill. But it announced on social media Thursday that Haider Hashim al-Maksusi, a nurse working in the capital's largest hospital complex, had died of covid-19, the disease caused by the coronavirus. Maksusi was pictured in his dark blue scrubs, pen in pocket and mask around his neck.

Poor medical infrastructure, shortages of personal protective equipment and public skepticism about the severity of the threat are all to blame for the increasing cases across Iraq, doctors and health officials say.

"We're fighting a war with faulty weapons," said Ibrahim, a doctor in Baghdad's Hussainiya hospital. He also spoke on the condition that his family name be withheld. "I dreamed all my life of being a doctor. I regret that now."

Ibrahim said he had seen colleagues contract the coronavirus and heard of about 80 others. He said his cousin, a doctor in the eastern province of Diyala, died in March, begging for an ambulance to take him back to a facility that would treat him.

Iraq's hospital wards are no strangers to battles. During a bloody sectarian war that peaked in 2007, they received bombing victims most days. The Islamic State brought more carnage still. But this time, the enemy is different, and as its spread challenges public health experts around the globe, many in Iraq worry it could bring an already staggering health system to its knees.

The virus started slowly here. As neighboring Iran became the regional epicenter of the epidemic, reporting more than 3,000 cases a day for almost a week by the end of March, Iraq was averaging about 80 a day. The notoriously porous border between the two countries was largely closed. Iraq went into lockdown and, for a period, cases fell and the country seemed to have been spared the worst.

But three months later, the wave is rising. Iraq's Health Ministry said Friday that 1,635 cases had been recorded since the previous day

During a recent visit to a major Baghdad hospital, a Washington Post reporter observed a line scores-long of people waiting for a coronavirus test. Many coughed violently in bursts, some doubled over from the force. "Don't breathe too much," said a security guard at the door. "Covid is everywhere here."

"If we had faced these numbers in the first wave, the health system would have broken," said Adham Ismail, the World Health Organization director for Iraq. Since then, Iraq's Health Ministry has readied special coronavirus wards and rapidly expanded its testing capacity with the help of the WHO.

Iraq's health system has been battered by cycles of war and then neglect during the peacetime that followed. In 2019, Iraq allocated just 2.5% of its national budget to health care.

In interviews, doctors and technicians working at four Baghdad hospitals and a laboratory described a wide variety of conditions as the pathogen spread. Hospitals that received the country's first cases have coped relatively well with the recent surge. Limited stocks of personal protective equipment have been provided to staff, and doctors say that there are low rates of internal transmission.

"We are dealing with this professionally. There have been no cases of contamination from our [coronavirus] ward in a month," said Mohamed Finjan, an ophthalmologist working in Baghdad's Ibn al-Haitham Eye Hospital.

But in other hospitals, staff described poor quarantine procedures, a dearth of personal protective equipment and long lines of patients. "It's overwhelming," said Yasser, the doctor in the poor, sprawling Sadr City district.

Zena al-Rubaia, a technician in the Baghdad laboratory that runs coronavirus tests, woke up May 28 to find her limbs were too heavy to move, she recalled in an interview. In the next room, her mother was calling out with a fever. Days later, both tested positive for the coronavirus, and Rubaia felt sure that her work had brought it home. She was hospitalized for a week, and at the height of her pain, she feared her lungs would give up.

But her mother refused to follow her there. She said she could be cared for by Rubaia's father, a doctor. She said he knew what he was doing.

He called Rubaia days later, sobbing. Her mother's breathing was ragged and her limbs were turning blue. Rubaia sat at her bedside for days in the hospital, feeling ridden with guilt as she watched her final breaths.

"I am the one who did this to her," she wrote on her Facebook. Days later, her father died, too.