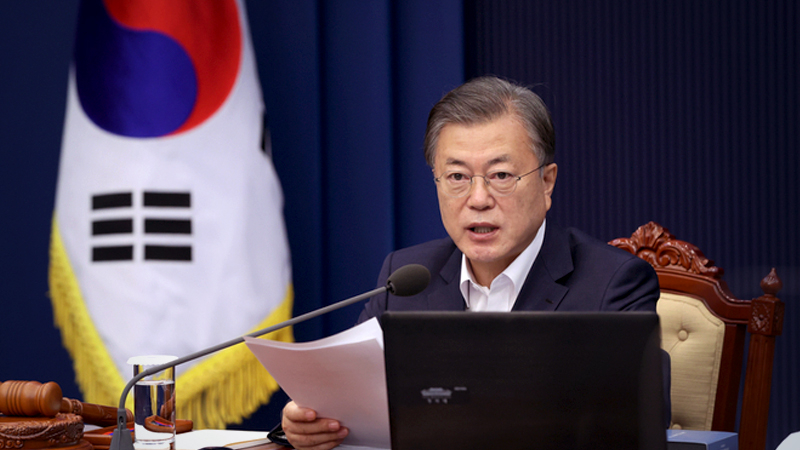 President Moon Jae-in said Tuesday that South Korea is seriously committed to its stated aim of going carbon neutral by 2050 to support the global fight against climate change.

He called for national efforts to attain the goal via a "calm and cool-headed" approach, speaking during a weekly Cabinet meeting at Cheong Wa Dae.

"Carbon neutrality is the direction in which the world should move to respond together to the climate crisis," he stressed. "We should actively participate in this global trend as a responsible member of the international community."

The president described his relevant statement last week as a "heavy promise" that reflects Seoul's commitment.

In an annual budget policy speech at the National Assembly, Moon announced that South Korea, one of the world's most fossil fuel-reliant economies, will "strive to become carbon neutral by 2050" as part of the government's Green New Deal drive.

He presented a vision for replacing coal-fired power generation with renewable energy.

In his opening remarks at the Cabinet session, Moon unveiled more details of the carbon-neutral campaign.

He instructed the authorities to meticulously draw up a road map for the energy transition from fossil fuels to environment-friendly sources in tandem with a review of plans to cut greenhouse gas emissions.

"In particular, I would like you to explore various measures to accelerate energy conversion such as decarbonization, the development of the hydrogen economy and the expansion of renewable energy use," he said.

He pointed out that carbon neutralization is not an easy task for South Korea, which relies heavily on fossil fuels.

"But responding to climate change is not an option but a must," he emphasized. (Yonhap)