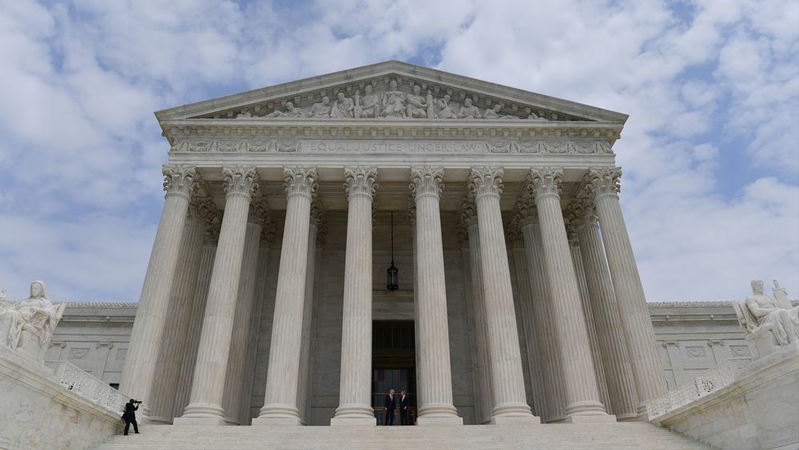 WASHINGTON - The Supreme Court on Monday put an end to lawsuits alleging that former president Donald Trump violated a constitutional anti-corruption prohibition by profiting from his business empire while president.

The justices, without comment or noted dissent, declined to hear Trump's request to consider lower court orders that said lawsuits could go forward, agreeing with those on both sides of the issue that the cases became moot with Trump no longer in office.

The justices also vacated the lower court judgments in the cases, one of which was filed by the attorneys general of Maryland and the District of Columbia.

It means that there is no definitive answer after years of legal wrangling over the Constitution's emoluments clauses, which prohibit presidents and others from accepting gifts or payments from foreign governments without congressional approval.

The question has rarely been presented because presidents rarely maintain active business interests in office, as Trump did. Much of the litigation turned on the president's interest in the Trump International Hotel on Pennsylvania Avenue, near the White House, which became a magnet for foreign dignitaries and others doing business with the government.

The litigation was consumed with questions about who had the right to bring such a suit, and legal questions without precedent.

"We are proud that because of our case, a court ruled on the meaning of 'emoluments' for the first time in American history, finding that the Constitution prohibits federal officials from accepting almost anything of value from foreign or domestic governments," District of Columbia Attorney General Karl A. Racine and Maryland Attorney General Brian E. Frosh said in a joint statement.

They added: "History will note that at every step of this case, President Trump and political appointees at the Department of Justice went to extreme lengths to prevent us from uncovering the true extent of his corruption. He attempted to short-circuit the rules of legal procedure to have our case dismissed and avoid discovery into his finances, arguing that the law did not apply to him."

Their case was one of three testing for the first time the Constitution's ban on the country's leaders engaging in private business relationships with foreign governments.

The Supreme Court declined in October to take up a case brought by Democratic members of Congress led by Sen. Richard Blumenthal, D-Conn., and Rep. Jerrold Nadler, D-N.Y. The lawmakers had appealed a Washington D.C. Circuit ruling that blocked individual members of Congress from trying to enforce the foreign emoluments clause.

In a third case in New York, brought by the nonprofit watchdog group Citizens for Responsibility and Ethics in Washington (CREW) on behalf of Trump's hospitality industry competitors, a three-judge panel of the U.S. Court of Appeals for the 2nd Circuit said a lower-court judge had improperly thrown out the case in late 2017.

The lawsuit alleged that Trump was illegally profiting from his hotels and restaurants in New York and the District. The full appeals court declined to rehear the case this summer and Trump asked the high court to intervene.