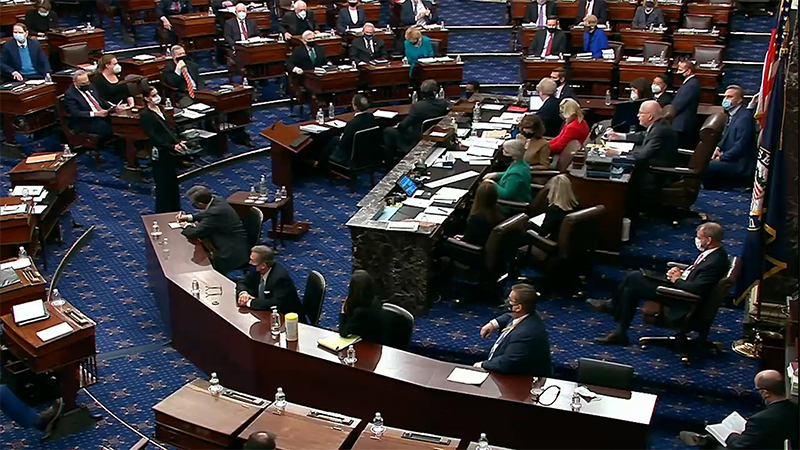 WASHINGTON - Of the 57 "guilty" votes that rang out on the Senate floor Saturday, only one - uttered by Sen. Richard Burr, R-N.C. - elicited gasps from around the chamber.

The North Carolina Republican had given no previous indication he was leaning toward voting to convict former president Donald Trump for inciting an insurrection, after a pro-Trump mob overran the U.S. Capitol on Jan. 6 in a violent siege that left five people dead.

But the days-long trial had convinced Burr of Trump's culpability, he said in a statement afterward.

"The evidence is compelling that President Trump is guilty of inciting an insurrection against a coequal branch of government and that the charge rises to the level of high crimes and misdemeanors. Therefore, I have voted to convict," Burr said. "I do not make this decision lightly, but I believe it is necessary. By what he did and by what he did not do, President Trump violated his oath of office to preserve, protect, and defend the Constitution of the United States."

Ultimately Burr was joined by six of his GOP colleagues, who voted alongside all 50 Democrats to convict Trump. However, it fell short of the number of votes needed - two-thirds of the senators present - for Trump to be convicted. In a 57 to 43 vote, the Senate acquitted Trump of the charge of inciting an insurrection, concluding the former president's second impeachment trial.

Burr, along with Sens. Bill Cassidy of Louisiana, Susan Collins of Maine, Lisa Murkowski of Alaska, Mitt Romney of Utah, Ben Sasse of Nebraska and Patrick Toomey of Pennsylvania were the Republicans who voted with Democrats to convict Trump.

Burr acknowledged that he had believed the trial to be unconstitutional when he started. However, Burr said he had made his decision as an impartial juror, believing the question of constitutionality to be established precedent after the Senate voted to proceed with the trial.

Cassidy had late last month also voted against the constitutionality of the trial but changed his mind Tuesday after considering arguments from the House impeachment managers and from Trump's defense. The Louisiana senator left the chamber before the vote was done Saturday.

In a lengthy statement, Sasse blasted Trump's repeated lies about the election having been stolen from him and and also defended the constitutionality of the trial.

"The president abused his power while in office and the House of Representatives impeached him while he was still in office," Sasse said. "If Congress cannot forcefully respond to an intimidation attack on Article I instigated by the head of Article II, our constitutional balance will be permanently tilted. A weak and timid Congress will increasingly submit to an emboldened and empowered presidency. That's unacceptable. This institution needs to respect itself enough to tell the executive that some lines cannot be crossed."

Immediately after the vote concluded, Toomey told reporters it was the "right call" to vote to convict Trump but gave no further comments. In a statement issued later, he acknowledged he had voted for Trump but that Trump's behavior after the election "betrayed the confidence millions of us placed in him."

"As a result of President Trump's actions, for the first time in American history, the transfer of presidential power was not peaceful. A lawless attempt to retain power by a president was one of the founders' greatest fears motivating the inclusion of the impeachment authorities in the U.S. Constitution," Toomey said. "His betrayal of the Constitution and his oath of office required conviction."

But it was Senate Minority Leader Mitch McConnell, R-Ky., who voted to acquit Trump, who gave a befuddling speech on the Senate floor afterward, arguing the former president is "practically and morally responsible" for provoking the Jan. 6 attack on the Capitol - but that the Senate was upholding the Constitution by acquitting him.

"The Senate's decision today does not condone anything that happened on or before that terrible day," McConnell said. "It simply shows that senators did what the former president failed to do: We put our constitutional duty first."

Trump, by contrast, appeared to take his acquittal as a vindication of his actions before, during and after the Jan. 6 attack. In a statement, Trump called his second impeachment by the House "another phase of the greatest witch hunt in the history of our Country" and hinted at a return to national politics.

McConnell spent much of his remarks condemning Trump's actions and directly linking them to the Jan. 6 insurrection. The former president's supporters, he argued, launched their violent attack "because they had been fed wild falsehoods by the most powerful man on Earth, because he was angry he lost an election."

"There's no question - none - that President Trump is practically and morally responsible for provoking the events of the day," McConnell said at one point. "No question about it."

He argued, however, that it was beyond the power of the Senate to hold Trump accountable for those actions.

"This body is not invited to act as the nation's overarching moral tribunal," McConnell said. "We're not free to work backward from whether the accused party might personally deserve some kind of punishment."

Immediately after Trump's impeachment by the House last month, McConnell blocked the Senate from swiftly beginning a trial while Trump was still in office. At the time, McConnell said Trump had "simply no chance" of a "fair or serious trial" before Joe Biden's inauguration Jan. 20.

But on Saturday, McConnell sought to deflect blame for that decision.

In January, McConnell's office informed aides to then-Minority Leader Charles Schumer, D-N.Y., that he would not agree to immediately reconvene the Senate to begin a trial, despite pressure from Schumer to invoke rarely used emergency powers that allow the two Senate leaders to unilaterally reconvene.

Without mentioning his own role in blocking an earlier trial, McConnell said Saturday that he might have voted differently if Trump were still president.

"If President Trump were still in office, I would have carefully considered whether the House managers proved their specific charge," he said.