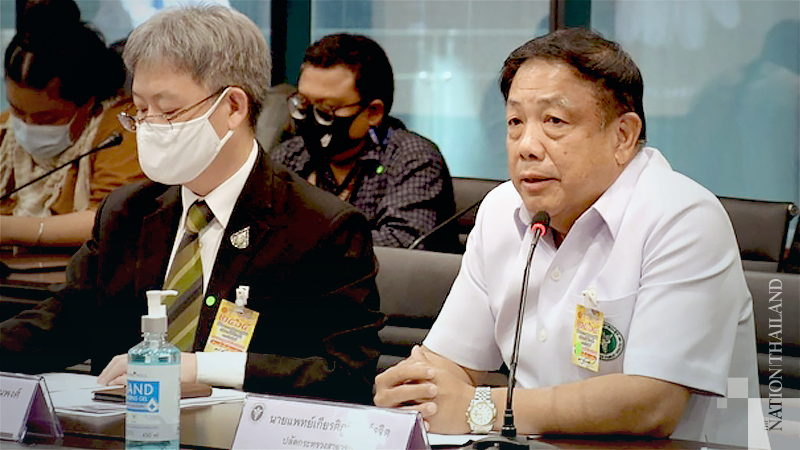 Ministry hits back at MP’s claims of vaccine mismanagement, monopoly

The Public Health Ministry has stepped up to deny claims made during Wednesday’s no-confidence debate that Thailand’s Covid-19 vaccination programme has been mismanaged.

The ministry held a press conference after opposition MP Wiroj Lakkhanaadisorn (Move Forward) attacked the government over its delayed vaccine plan and Siam Bioscience’s “monopoly” in manufacturing the AstraZeneca vaccine.

Health Ministry permanent secretary Kiattaphum Wongrajit said the effectiveness of Thailand’s efforts to contain the outbreak had been recognised by international organisations. Meanwhile, 63 million doses of vaccine had been reserved to vaccinate people this year.

Thailand began negotiating with foreign companies when they launched human tests for mRNA and viral vector vaccines, he said.

After developing a viral vector vaccine in July-August last year, AstraZeneca and Oxford University assessed Thai companies’ capabilities and chose Siam Bioscience as a suitable firm to receive the technology transfer for vaccine production, he added.

Partnering with another company would have meant merely taking shipment of vaccines. “But with AstraZeneca, Thailand will gain the potential to produce world-class vaccines in the country,” Nakorn said. Siam Bioscience was among 25 companies around the world selected by AstraZeneca to make the vaccine, he added.

He also dismissed rumours highlighted in the no-confidence debate that Thailand had rejected an offer of vaccines from India. He said India had never offered to sell the AstraZeneca shots to Thailand, but the two countries had signed an MoU for vaccine research.

Meanwhile, he dismissed another claim made during Wednesday’s no-confidence debate – that Thailand had been left out of the World Health Organisation (WHO)’s COVAX vaccine procurement programme. He said the government was still negotiating with the WHO to seek conditions that were suited to Thailand.

Nakorn said that if MPs had checked details about COVAX they would have found that most of its vaccine comes from AstraZeneca with a small percentage from Pfizer. Since Thailand will soon launch production of AstraZeneca vaccine, it did not need to join the WHO programme, he added.

Opas Karnkawinpong, director-general of the Disease Control Department, said the ministry had also prepared a system to track the effects of vaccination. After being vaccinated, people would have to wait in the hospital/clinic for at least 30 minutes before returning home, and then receive a check-up the following month. Anyone who suffered harmful side-effects from the vaccine could claim compensation from the National Health Security Office under a new regulation (Section 41).