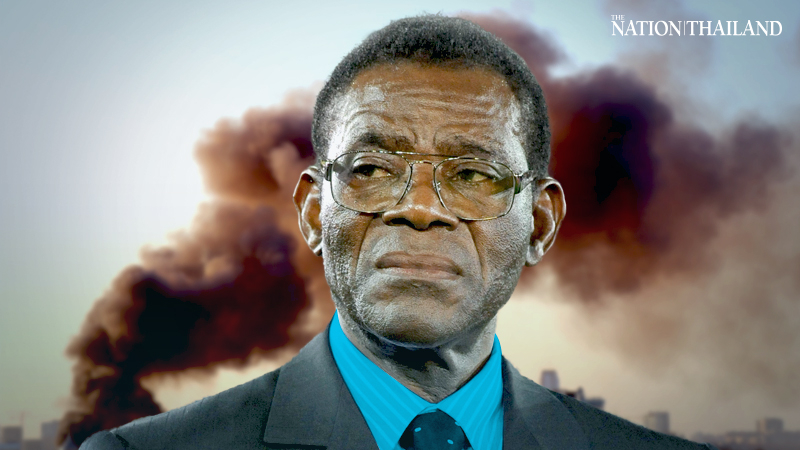 The blasts Sunday afternoon in the port city of Bata sent giant plumes of smoke into the air and destroyed dozens of buildings. Images broadcast on state-run television showed injured residents fleeing. Some seemed to be carrying bodies of the dead.

The Health Ministry said it had confirmed 17 dead and 420 injured. A doctor in Bata, a former capital, told the state-run TVGE television network that at least 20 were dead.

In a statement read by TVGE's broadcasters, President Teodoro Obiang Nguema called the incident an "accident" and blamed it on the "negligence" of those tasked with guarding stores of dynamite and munitions. He ordered an investigation and asked the international community for help in rebuilding parts of the city that had been destroyed.

Equatorial Guinea is a small and impoverished country wedged between Gabon and Cameroon on Africa's Atlantic coast. It's divided into two parts: the mainland, home to Bata, and an island called Bioko, about 150 miles to the northwest, where the capital, Malabo, is located.

Obiang has been in power since a coup in 1979, and is known for his repressive rule, a vast network of corruption and lavish vanity projects. The world's longest serving president, he secured a sixth term in 2016, claiming 99% of the vote.

While the country is rich in oil and timber, the majority of its million and a half citizens are poor. By some measures the rate of extreme poverty is 40%.

Numerous coup attempts have been staged against Obiang over his decades in power, and in those instances, news coverage has been heavily curtailed. On Sunday, state-run TV showed uninterrupted coverage of the blasts throughout the afternoon and evening.

Blasts at arms depots have been seen in central Africa. Nine years ago, about 250 people were killed in similar blasts on the outskirts of Brazzaville, the capital of the Republic of Congo.

Equatorial Guinea and the Republic of Congo are both ruled by leaders who have spent decades in power, and who often use their militaries' might against their own people to suppress dissent.