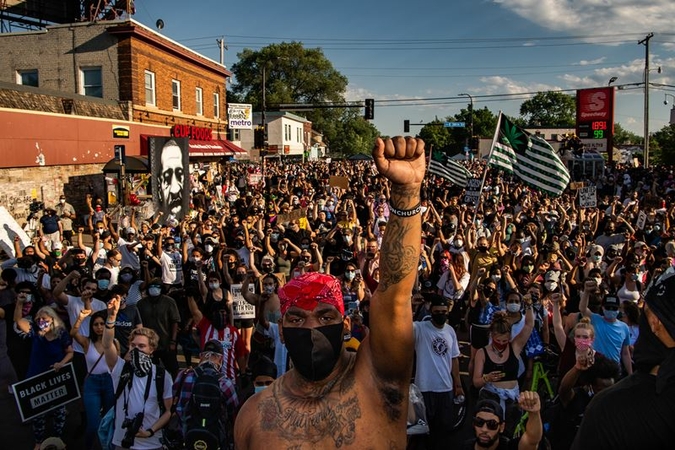 When police kill people, they are rarely prosecuted and hard to convict

The footage plays inside the downtown Minneapolis courtroom where Derek Chauvin is on trial, charged with murder. It shows George Floyd, a Black man, gasping for air under the White police officer's knee.

That video is the centerpiece of the case against Chauvin, which prosecutors emphasized by urging jurors to "believe your eyes."

But prosecutors face a steep legal challenge in winning a conviction against a police officer. Despite nationwide protests, police are rarely charged when they kill someone on duty. And even when they are, convictions often are difficult.

Between 2005 and 2015, more than 1,400 officers were arrested in a violence-related act committed on duty, according to data tracked by Philip Stinson, a criminologist at Bowling Green State University. In 187 of those cases, people were fatally injured in shootings or from other causes. The officers charged represent a small fraction of the hundreds of thousands of police officers working for about 18,000 departments nationwide.

Police charged with committing violent crimes while on duty were convicted more than half the time during that period. In the most serious cases - those involving murder or manslaughter - the conviction rate was lower, about 50%.

About 6 in 10 people charged with violent crimes were convicted, according to a federal report that examined cases adjudicated in the country's 75 most populous counties in 2009. The number increased to 70% when murder was the most serious charge. Most criminal cases in the United States end in plea bargains, rather than court trials.

Chauvin's case is different from many of the most high-profile police prosecutions in recent memory, in part because it centers on an officer who never fired his gun, experts say.

There are a few reasons it is difficult to convict a police officer, according to legal experts and attorneys who have worked on such trials: Police have considerable leeway to use force, can cite their training and are typically trusted by juries and judges.

"The law favors the police, the law as it exists," said David Harris, a law professor at the University of Pittsburgh and an expert in policing.

"Most people, I think, believe that it's a slam dunk," Harris said of the case against Chauvin. But he said, "the reality of the law and the legal system is, it's just not."

Attorneys who have worked both sides of these cases say they invite heightened scrutiny and raise a host of issues about the authority police have, the force they are allowed to use and the dangers they could confront on the job.

"It's fundamentally different than handling any other kind of case," said Neil Bruntrager, a St. Louis-based attorney who has represented officers in high-profile cases.

A key element that experts say factors into many of the cases is the Supreme Court's 1989 Graham v. Connor decision, which found that an officer's actions must be judged against what a reasonable officer would do in the same situation.

"A police officer can use force, but it has to be justifiable," Bruntrager said. "And what the Supreme Court has told us is we have to see it through the eyes of the police."

Police shoot and kill about 1,000 people a year, according to The Washington Post's database tracking such cases. Most of these people are armed, and most of the shootings are deemed justified. When police are charged in fatal shootings, officers are convicted less than half the time, often on lesser charges.

Chauvin's case is unlike those in key ways, experts say. "It'll be much harder . . . for Mr. Chauvin to claim the usual justification of self-defense than it is when there are shooting deaths," said Kate Levine, a professor at Yeshiva University's Benjamin N. Cardozo School of Law. "It's very hard for him to say, 'I was in fear for my life when I knelt on this man's neck.' "

When police shoot and kill someone, the officers' descriptions of what they saw and felt - and accounts of the danger facing them or someone else - can be a major part of the defense, experts say.

"In many of the shooting cases, the officer will say, 'I perceived a threat in the form of reaching for a gun, or an aggressive move towards me,' " said Rachel Harmon, a law professor at the University of Virginia. "It is difficult for the state to disprove the perception of that threat."

In this case, Harmon said, "there's not the same kind of ability to claim a perception of a threat."

Chauvin's attorney argued in his opening statement that the officers charged in Floyd's death felt the "growing crowd" at the scene was threatening. But Chauvin's core defense, as presented in legal filings and his attorney's remarks in court, appears to be focused on something else: making a case that he did not actually kill Floyd.

In court filings, Chauvin's attorneys noted Floyd's health issues and said he "most likely died from an opioid overdose," trying to break the chain of causation between Chauvin's knee and Floyd's death. Medical experts have said say they disagree with the defense's argument.

Debates over causation have come up in other cases not involving gunfire, including when people die behind bars or after being shocked by stun guns, said Craig Futterman, a University of Chicago law professor and director of the Civil Rights and Police Accountability Project. In those cases, he said, the argument is often made that "other contributing factors," such as drugs in someone's system, played a role.

The invocations of Floyd's drug use in Chauvin's trial also echo previous cases in another way, Futterman said.

"One of the standard strategies in the playbook that I've seen, when police officers are accused of misconduct, are charged with killing someone, is putting the victim and the victim's character on trial," he said.

But it's unclear how that might play out in an evolving environment, in which attitudes on how police use force have changed, Harmon said.

"One of the things that's really shifted in the public debate over use of force is that many people think that there's too much force even against people who committed crimes, and may use drugs, and may have problems in their lives," Harmon said. "The public tolerance for the argument that the victim of misconduct or victim of police use of force has done something wrong is less broad than it once was."

Another key shift observers said may affect these cases is the changing way people may view police officers.

Juries have typically been inclined to trust officers, who come to court with no criminal record and with experience in testifying, experts and attorneys said. But, they said, recent years of repeated viral videos of police shootings and other uses of force may have chipped away at that perception.

The wave of protests that followed Floyd's death last year was accompanied by a decline in public approval of police, and last fall voters in several places approved more scrutiny and oversight for police in their communities.

"It's not an easy place to be in a position where you're defending police officers who are charged these days," said Bruntrager, the defense attorney who represented former officer Jason Stockley in St. Louis and former officer Darren Wilson in Ferguson, Mo.

Wilson's fatal shooting of Michael Brown, a Black 18-year-old, fueled widespread unrest in 2014 and helped lead to a years-long nationwide focus on how police use force. Before then, Bruntrager said, if police "had any kind of credible defense, people wanted to believe that . . . police were following the law."

"Now it is the reverse," he said. "Now it is a situation where you start out with the idea where people believe police officers are violating the trust."

But prosecutors still worry about persuading juries to convict on the most serious charges.

When Joseph McMahon, a former Kane County, Ill., state's attorney, was preparing to try a Chicago police officer on murder charges, his team contacted other prosecutors who had charged officers - often unsuccessfully.

McMahon and his team were preparing a case against Jason Van Dyke, who fatally shot Laquan McDonald, a Black 17-year-old. Video footage of the shooting, which showed the officer firing 16 shots at the teenager, set off unrest when it was released in 2015. Van Dyke was charged with murder the same day the video was released.

After speaking to other prosecutors who said jurors in their cases could not bring themselves to convict the officers of murder, McMahon said he had Van Dyke charged with another 16 counts of aggravated battery, one for each gunshot.

"I didn't want my jury to be faced with an all or nothing decision," said McMahon, who was named special prosecutor in the case.

If the only option facing jurors involved the word "murder" in it, McMahon said, he was worried one or two jurors might be unwilling to sign off on it. Jurors get instructions about the legal definitions of specific crimes, he said, but people might still walk in with preconceived notions of what murder is and not think an officer's actions fit the bill.

It wound up being unnecessary, he said. The jury convicted Van Dyke on all counts in 2018, including second-degree murder.

Attorneys representing police in controversial use-of-force cases have defended them by saying that they can use force and often have to make split-second decisions in tense, potentially dangerous moments.

Police officers are only human and can get "scared like everyone else" during stressful situations, said Dan Herbert, the Chicago attorney who represented Van Dyke. "The fact of the matter is that the law recognizes that police are allowed to use force, including deadly force, in a number of situations," he said.

Eric Nelson, Chauvin's attorney, invoked this argument during his opening statement when he called police uses of force "not attractive" but sometimes necessary.

Herbert said it is "probably naive" for the defense in Chauvin's case to hope it can persuade a dozen jurors to vote to acquit.

Instead, Herbert said, Chauvin's defense probably will aim to "pick off one or two of those jurors and possibly hang the case" by having the jury deadlock. The defense's best chance heading into the trial, he said, probably was its attempt to break the chain of causation and argue that Chauvin did not kill Floyd.

Prosecutors sought to fight the defense's claims of an overdose by having Floyd's girlfriend testify about his struggles with substance abuse, a testimony aimed at establishing his tolerance for opioids.

The defense's argument on that front could appeal to someone inclined to blame Floyd, rather than the police, for what happened, said Harris, the law professor at the University of Pittsburgh. Chauvin's team does not have much else to work with, he added.

But while the prosecution must persuade every juror to vote to convict him, the defense just needs "one juror who feels a little funny about convicting a police officer," Harris said.

"You have the law leaning in the direction of, give police the benefit of the doubt," he said. "That seems a difficult thing to do with this video. But if somebody had that inclination, deep down, here's your way to exercise it."